Amanda Jean only stands at 4’11” but don’t let her size fool you. This 26 year old from Pittsburgh is one badass girl with one absolutely wonderful personality. Anywhere from Inked Magazine to MTVs House Of Food. She has done so much. Recently doing a fundraiser called Kiss My Asspergers. Amanda currently lives in LA. But I had the chance to interview her and get to know this amazing person a little bit better.

What was your first tattoo and how old were you?
My first tattoo was on my lower back and it’s a star. It’s a stupid tattoo haha.

Which tattoo means the most to you?
Well there are a couple. The one for my mom, my best friend that passed away and the flowers from my gram passing away.

Are there any tattoos you ever regret?
Yes there is two. My first tattoo and the one where my tattoo artist fucked up, that’s the one on the outside of my arm.

Where do you see yourself in 5 years?
In 5 years I see myself owning my own clothing line, married and just starting a family!

What is the craziest thing a fan has ever done or said to you?
I have had some funny fans but the craziest is when I post about where I’m going to be and they drive as far as 3 hours away to come see me.

To you, what is the most important thing for someone to remember when getting into modeling?
Don’t let it go to your head. Most people think you have to have a certain attitude to be a model and that is just untrue. Out of everyone that gets paid at a professional (real modeling) shoot you’re at the bottom of the totem pole. Stay humble!

Any advice for anyone who wants to get into modeling?
Don’t expected to pay all your bills, have fun but have a plan “B”.

When did you decide you wanted to be a model? Right before I moved out to La about 8 years ago.


The Meaning behind her 24 tattoo: 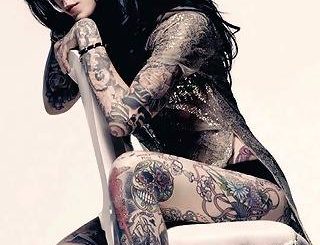 Welcome to the INK’D REVOLUTION With KAT VON D and KELLY B!