As part of the local metal scene here in St.Louis I find myself always going back to the heavy hitting five piece Hollow Point. They are straight up no frills, in your face metal,with the live show to match. They seem  to have unbound energy and are really a great group of guys with some really great hair, who love to play metal.

Members include Tony Milson on Vocals Aaron Chambers on Lead Guitar Billy Brynda on Rhythm Guitar Brandon Bollinger Bass and Preston Seymour on drums. Their EP “Veil of Reality” is a testament to how much they love the genre and mix up their style with use from all their influences, such as Lamb of God, Pantera and Avenged Sevenfold. Together they create a fast past larger than life sound. Tony is a talented front man with a mix of growls and roars along with clean vocals that kick ass over a well executed, heavy rhythm section provided by Brandon, Billie and Preston. Aaron provides the flair with his ability to shred and solo.

The song structure these guys provide will make any metal head happy. They never seem to slow down and when they do, it’s just so they can build you right back up. When they hit the stage they provide the authority and all eyes are on them, while the crowd has no problem getting those fists in the air. Some of the songs on the EP include “Abandoned” and “Axiom” which include the lyrics “Now I stand on this conviction,” which has been nicely placed on one of their t shirts that their fans proudly sport. They have been working hard in the STL scene and recently won a spot on the annual Kansas City RockFest. They are set to start recording a full length album but no release date has been set. Look out for these guys and add them to your Spotify playlists and follow them using the links below. 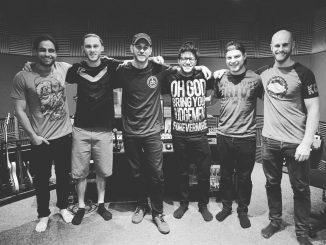 1 Comment on HALLOW POINT: Never Seem to Slow Down