by  Octavio Ramos Jr.
On November 2014, a helicopter landed just outside the majestic Hard Rock Hotel in Las Vegas,
Nevada. From it emerged a quartet both familiar and alien: a Catman, a Spaceman, a Demon, and
a Star Child. For nine killer shows, the one and only KISS rocked Las Vegas, and now thanks to
Eagle Rock Entertainment, fans who missed out on tickets to this sold-out circus can experience
the spectacle and glamour that only KISS can produce. The CD/DVD compilation Kiss Rocks
Vegas Nevada is a definite must-see for longtime fans, but it is also an important package for
those who have not yet succumbed to the KISS Army. Even if you are not a fan of the band’s
music, watching this video may actually change your mind about the band. Some may be
surprised by this statement, but even naysayers will reluctantly admit that these four rockers sure
know how to put on one hell of a show.
Founded in January 1973, KISS has established quite a catalog of music, and for the band’s
nine-show residency in the City of Sin, the rockers successfully selected a set of songs that will
please old and new fans alike. Vintage tunes like “Deuce” and “Parasite” blend with newer tunes,
such as “Lick it up” and “Psycho Circus,” and there is still room for staples such as “Detroit
Rock City,” “Tears are Falling,” “Shout it out Loud,” and the closer, “Rock and Roll all Nite.”

The two remaining original members also have mini-showcases. Bassist and vocalist Gene
Simmons is up first, blasting his way through a reverberating and volcanic solo before letting
loose with his signature song, “God of Thunder.” Up next is rhythm guitarist and vocalist Paul
Stanley, who literally flies his way through “Love Gun.” Drummer Eric Singer (who first joined
the band in 1991) gets the spotlight when he sings “Black Diamond,” and guitarist Tommy
Thayer (who also produced the package) impresses with some startling riffs and solos throughout
the concert.
Many critics have noted that KISS is at its best when performing live, and this concert
performance captured on DVD leaves little doubt about this assertion. All members of KISS are
master showmen, and from start to finish the spectacle shows no mercy. There are of course the
usual antics of Simmons, from his signature tongue and licking his bass to breathing fire,
drooling blood, and using cables to fly into the air. Stanley also gets into the act, flying into the
air and performing a song while prowling across a suspended catwalk. There are different laser
lights, explosions and fire effects, a stellar and at times dizzying light show with a rainbow of
colors, huge back-screens that show all kinds of visuals and animations, and there is a
well-choreographed effect in which Thayer fires explosives from the end of his guitar (this one
during “Hell or Hallelujah”).
Underlying all the theatrics, however, is a tight band that belts out some finger-fretting tunes sure
to have most dancing right from the start. The instrumentation throughout is solid, with the
rhythms and hooks coming fast and furious, the percussion keeping things moving, and the lead
guitar solos hearkening back to the heyday of rock and roll. Stanley in particular channels facets
of The Who’s Roger Daltrey, down to the microphone spin that closes the show. These
underlying components serve as a nod to when rock and roll just felt good, and the majority of
KISS’s songs bring with them that feel-good vibe.

Countering the theatrics that make up the Vegas show is a bonus feature on the DVD, which has
the band performing an acoustic set for a small audience before the night’s full-blown concert.
Stripped of makeup and the theatrics, the members of KISS perform “quieter,” more intimate
songs, such as “Coming Home,” “Christine Sixteen,” and of course “Beth.” This performance
showcases the band’s ability to deliver a toned-down performance, where instrumental prowess
and songwriting melody set a distinct mood. The entire set is warm, with the band really
connecting with the audience. It’s nice to see KISS in this light, as it really demonstrates how
well the band as a whole works in an intimate, club-like setting.
Production for the DVD and CD is superb. The DVD is particular captures the essence of a KISS
show, with the emphasis placed on the performances while still injecting audience reaction.
Sound quality is good, although there tends to be a bit too much whir on the CD, but that may be
because of the loud audience participation. If you have avoided ever even sampling KISS, pick
up this package and you just may become the newest member of the KISS Army. It’s true—you
have never seen the likes of this. . . .
Live Image Credits: Epic Rights
KISS Rocks Vegas Nevada website: http://kissmycinema.com/
Barnes & Noble site:
http://www.barnesandnoble.com/w/dvd-kiss-kiss-rocks-vegas/30094330?ean=0801213353798&
Walmart site:
https://www.walmart.com/ip/Kiss-Rocks-Vegas-CD-DVD/54065300?wmlspartner=wlpa&select
KISS Facebook: https://www.facebook.com/KISS/?fref=ts 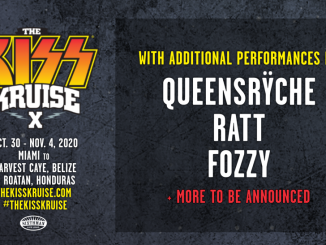 KISS Returns to the Sea with KISS Kruise X 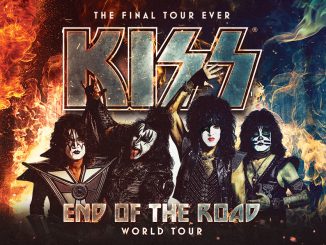 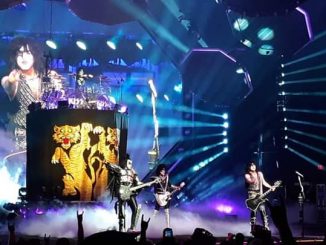