Power metal has been one of the biggest driving forces in the history of heavy metal. It has combination of screeching guitar riffs, enthralling solos, soaring vocals, and composite songwriting. It was popularized in North America during the late 1980s and has gained a widespread following in Europe. Some of the groups that have been well-known in power metal include Armored Saints, DragonForce, Sabaton, and Nightwish. There is one band from Tampa, Flor., that has captivated my attention, Iced Earth. First on scene in the year 1985, Iced Earth is considered one of the most premium power metal acts in the world. They are back at it with their newest effort, Incorruptible.

This album marks the third one to feature current vocalist, Stu Block. As soon as I heard the grand Viking opener, “Great Heathen Army,” I was immediately hooked. I just fell in love with its amazing guitar arrangements. Rhythm guitarist and founder John Schaffer has once again masterfully formulated riffs that gave me chills down my spine. From “Black Flag” to “The Veil,” he has shown that after 30+ years, his playing has not lost any of its edginess or effectiveness. Block’s towering voice gives me such a rush. He has also penned some incredible lyrics from epic pirates (“Black Flag”) to songs about the Irish Brigade at the Battle of Fredericksburg (“Clear the Way (December 13th, 1862)”).

There is also a great deal of brutality in his vocal technique, as evidenced in the already hit single, “Seven Headed Whore.” This is the first album to feature a new lead guitarist, Jake Dreyer. He is an absolute wizard on guitar, casting spell-binding solos that would give Yngwie Malmsteen a run for his money. In addition to the earth-shattering singing by Block, Iced Earth showcases their musicianship talents with the instrumental, “Ghost Dance (Awaken the Ancestors).” A tune that gives homage to the Native Americans, it is just incredibly executed. If listened closely, you can hear Indian chants in the background. Bassist Luke Appleton and drummer Brent Smedley dazzle me with their pulse-driven bass riffs and enticing drum beats. The best track in my opinion is “Black Flag” because it tells the story of the struggle pirates went through against the British Empire. Plus, I love pirates. Other well-worthy songs include “The Relic (Part 1)” and “Raven Wing.”

Every inch and every note of this album is remarkable. It is Iced Earth’s 12th studio release, and it is proof that bands can evolve rather well over time, especially when it comes to writing spectacular records. Matt Martinez and I also got to attend a listening party hosted by Jose Mangin, where we got to meet Schaffer, Dreyer, and Block. Listening to the album and seeing the fans reaction was what makes this album even more special. They could not get enough of Incorruptible, and neither could I. The year of 2017 has continued to see great works of music come out onto the scene. If there are any fans looking for a dominant power metal record to listen to, then look no further. To Iced Earth, I salute you. Horns up!!! 10/10 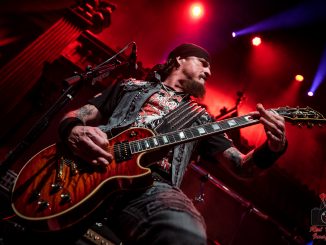 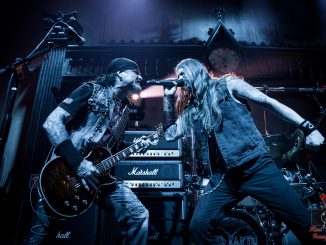