Let me tell you about the band THE CROWNED; from Austin, Texas. A bunch of hard working guys, that have been working on this debut album which seems like forever. But APPARITION is finally here.

After having a successful tour with HELLYEAH, the guys came home to Texas to put the finishing touches on the disc. The results, nothing but driving, melodic, aggressive and metal as fuck. The guitar driven and headbanging sense of HATE, to the penetrating growl intro into the song GOD DAMMIT, you will know this band is in it to rip your face off, and create insanity to your ears. The drumming on this one is also metal as fuck, intertwined with the screams and up beat tempo, it will just blow you away. WARFARE (featuring Amanda Maddera), is a personal favorite of mine, with more driving and heavy hitting soundscapes, combined with some insane aggressive vocals. All this makes this song something that could be horrifying and delightful in the same few seconds.  If you haven’t heard NOTHING from this band, well I think you need to, because this is the bands anthem of the summer, and I am sure you are going to have some crazy fuckers singing lines of this song for years to come; “what makes you a whore makes me a king,”  “NOBODY fucks you like I fuck you” and got to love “I throw you down, pull your hair, grab your neck, spank your ass, makes you powerless.” It is clear that, Mr. Coronado the sexual beast came out in this one, and I am sure it is making the girls wonder about the sentiments in this song; but aside from the sexual overtone the song is catchy; but still covered with a heavy mentality. Seems like a fun song to do live and fits perfectly into the atmosphere of the disc. DEFEAT THE MONSTER, another favorite of mine, is fast, pounding and just love the lows and highs of the tone of the track. APPARITION merges the sense of a cleaner and very melodic driven sentiment, in the beginning and the chorus, and it shows the singing ability of Coronado (which I love) but also is ready to pummel you with heavier pounding elements; a great way to end the disc. The other tracks like YOUR PROMISE, KILL, MURDER, and THE DEAD, which is the band’s first single off the album, you might have heard before, since the band has already made some killer videos for them. Through all these songs it shows the harder, more metal sense of the band, and incorporates a groove feel, melody niches and lyrics that will take you on the journey inside the mind of a man of mystery and intrigue.

I want to end this, back at the beginning of the journey through APPARITION to track one. The song that made me fall in love with this band, and made me believe that Marc Coronado was a man of talent, one who should and will be conquering the world with THE CROWNED, and even on other adventures he pursues. FORTHCOMING is the track that made me venture into the world of THE CROWNED.  Piano driven, with beautiful vocals, makes this track haunting, believable and astonishingly captivating. Personally I would love to hear more clean and simple vocals from this guy (and band) anytime in the future. A tortured, lost, sad soul all come to mind when I hear this song.  Now if that is what makes amazing music, then keep going into a dark place and make more music for us in the future, in the same manner you produced what you have on Apparition.

I have not seen this band live yet, but I am sure once the release is out, these guys will be jumping on some good tours. If they are in your area, don’t miss out, because if the album is this good, then a live show is probably intensely magical. If you are looking for something to whet your appetite, that is heavy and brutal, then all I can end with is a quote from the maker himself about the first single THE DEAD. Coronado states, “‘THE DEAD’ is a taste of what our album has to offer. Brutal fast riffs, breakdowns, melodic tones, whaling vocals, deep screams, and powerful chords to accent the disturbing visuals in the video.” 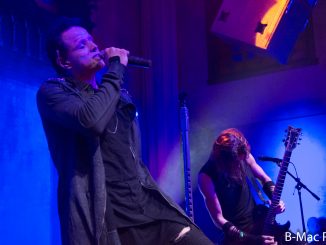