When the new House of Blues Anaheim was built, it was designed with a grander scope than the one that it replaced. That meant they wanted a bigger concert venue, and boy can you pack more people into the new venue. As well as designing the restaurant portion of the House of Blues to be larger, with more of a fine dining aspect to it. However, they also wanted to bring something new to the brand. This included building a Lounge Area/Night Club on the second floor, called the Foundation Room. One thing that my partner Brandon McCarthy and I did not know existed, was that a smaller second stage, called the Parish, was also added to the venue. It was here that legendary guitar virtuoso, and former Megadeth guitarist Marty Friedman, would bring his instrumental thrashing to Anaheim. Alongside two other instrumental bands, Scale the Summit and The Fine Constant, there was no doubt, this was going to be a night to sit back, and just admire the technique that these instrumentalists brought.

After The Fine Constant finished up their set, it was time to see what the progressive metal Texans, Scale the Summit had to offer the people of Anaheim. Right out of the gate, Scale the Summit set the tone for their set with “The Warden.” A very groove heavy song with a dreamy tone, that took the audience out of Anaheim and into a fantasy world. Original member and guitarist Chris Letchford, is the master of his 7-string guitar, and an eye catcher, as he plays a guitar with no head stock. Not one to be limited by the tradition 4-string bass, newly joined bassist Kilian Duarte not only added one, but two addition strings. Slapping, tapping, and plucking at his 6-string bass, Kilian proved that he could create melodic and leading tones, out of an instrument that normally sits in the back of the mix. Other newest member, Charlie Engen sat behind the drum kit, weaving the beats and accenting the tempo changes in such a way, that it allowed the audience to stay in time with the journey, Scale the Summit was taking us on. Their whole set transported me to another world, where I felt like I was leading my adventure through the woods, fighting off creatures that were pursuing me. With each new song that was played, it created a new arc in my adventure, with its own beasts and obstacles. As they finished up their set with “Witch House,” it ended my journey and returned me to Anaheim. I had gone full circle through my adventure, and was still eager and ready to see where my night could still go.

Full Scale the Summit slideshow below:

Coming to the stage next was the man. The legend. The myth? As the patrons of the Parish eagerly waited for Marty Friedman, he never seemed to take the stage. We grew increasingly more worried, that he might not come out, as time continued to tick away, and chants of “Marty! Marty! Marty!” rang out, the stage remained barren. Finally after running about 45 minutes over his start time, the lights went dim, and we could see the guitar icon taking the stage. Opening their show by having everyone gather around the drum set, fists in a circle, they got each other pumped up, and they were ready to rock! All of a sudden there was a burst of energy, as everyone flew out towards the audience shredding on their instruments. Only there was one problem. There was no sound coming from Marty’s guitar. As he called for everyone to halt the song, halfway through, so he could switch to a different guitar that worked. Once ready, they all met in their circle around the drum set again, and with another big burst of energy, the group flew out towards the audience, and there it was, the sweet piercing sound of a guitar in the hands of a master of his craft. It was a sight to behold, watching Friedman tearing it up on his axe. As they finished their opening song “Hyper Doom,” you could see something was still wrong as Marty called for them to play it one more time. I guess the band wasn’t completely in sync for his liking. Circle the drum set, same burst of energy, wrought with raw guitar skills, they finished the song for the third time, this time around it was perfect!

Accompanying Marty Friedman on this tour was bassist Kiyoshi Manii, who is just as talented of a slap bass player as Flea, but with cuteness that just makes the audience fall in love with her. Behind the drum kit, and sometimes jumping on top of the kit, is Chargeeee. Looking like he just stepped off of the Sunset Strip in Hollywood during the heyday of the 1980’s Glam Metal scene. The man is an astonishing drummer to see, as he has the energy of Keith Moon and the look of Tommy Lee of Motley Crue. Rounding off the group, is the youngest member of the band, Jordan Ziff on rhythm guitar, who has the technical prowess to stand with these masters of their craft. Though this was Marty Friedman’s show, he did allow all the other members their moment in the spot light. Kiyoshi Manii even got her own section for a bass solo, that had the crowd screaming, and stuck to every pluck of the string she made. Finishing off her solo by singing short verse of Britney Spears’s “Hit Me Baby One More Time.” It was clear to see that Marty knew how to hand pick the best team to tour with, and bring his music to the masses.

Everyone in attendance that night was there to see guitar technical work at its best, and the crowd got more than just that. With Scale the Summit, we got taken on a journey and adventure, that told a story that was different for each person.  With Marty Friedman, he chose the right team to bring out the best in every musical instrument that was on stage. Making sure that each person in the crowd was going to get to experience the best of what each tool of music could do. To Scale the Summit and Marty Friedman I raise a fist to the sky and give you a “Hell Yeah!” 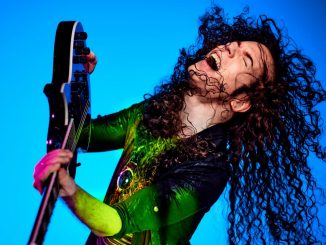