All bands strive to be successful and bring their music to the masses. Some bands achieve ultimate fame by being considered a house hold name. You bring up some artists such as Motley Crue, Tom Petty, Alice Cooper, etc. and every single person knows who you are talking about. One of their songs will come on the radio and everyone in the car will start singing, because it’s just ingrained in our minds. Not all bands may achieve this kind of commercial success, but they will still find success through other outlets. Let that be in movie sound tracks or genre specific night clubs. One of these bands is Lords of Acid. Headlining their Sextreme Fest ’17 tour and bringing along CombiChrist, Christian Death, En Esch, and Night Club. Together these industrial music beasts were going to bring out the inner sexual demons of everyone who stepped foot into the Wayfarer in Costa Mesa.

Opening the night is a band that I have reviewed a couple times this year already. With a line up this strong, they still find a way to be the coolest people in the room. Of course, I am talking about the two man band Night Club. Lead singer Emily Kavanaugh, has an aurora about her that ensnares you in a trance, and you can’t take your eyes off of her, as she dances around the stage. As well, she is one of the most welcoming people to meet at the venue. Music Programmer Mark Brookes continues to create the beats that have the audience dancing, and tempos that allow Emily Kavanaugh to go crazy on. As Night Club went into their final song “Bad Girl” they pulled on stage two diehard fans, Rachel Coffey and Elena Pedroza, to sing and dance the entire song with them. What more can you ask for in a band, than a band that helps to create such memorable moments for their fans. It is really great, to see this band getting picked up for a national tour, as I feel they have such potential in the industrial music scene. Sadly though, Night Club will be jumping off of this tour after the next two stops. I am hoping to see them picked up for another band’s tour soon, as Night Club is a band that you can’t afford to miss, no matter where they play on the bill.

Up next to the stage is a man who has made a name for himself performing with such bands as Slick Idiot, <PIG>, and KMFDM. En Esch brought his brand of German Industrial Music to Costa Mesa. Esch is a fellow music programmer, who uses a vocalizer to make his vocals more electronic and part of the beat. Accompanying him on vocals, is the seductive Erica Dilanjian, who brought the pure, clean style vocals to Esch’s grungy electronically enhanced vocals. Performing his own original songs like “Do Me” and “Live and Let Live,” as well as a few covers of KMFDM songs such as “Godlike.” Esch had the Wayfarer turned into an industrial night club with every club goer dancing to the beats, that were projected out to an eager crowd.

During the set change, the stage hands setup two microphone stands with roses surrounding them, we knew that we were in for a different music act than what we have seen in the previous two bands. As Christian Death walked on stage, our first sight was that of lead singer and guitarist Valor Kand wearing a dragon scale, armored head piece and necklace.  He grabbed a violin bow and played the part of the conductor to the opening instrumental, as bassist and singer Maitri and drummr Mike Monroe came to stage. Christian Death brought a change of tempo to the Wayfarer. At one point, Valor Kand did pull out a violin and start to play an amazing violin solo, that led into a song fronted by Maitri. As a founding band to the creation of Gothic Rock and Death Rock scene, the band was mostly playing slower tempo songs, allowing the audience to just groove to the spell that Valor Kand was creating. Putting the audience into a gothic fueled trance, we were only able to wake up as Christian Death finished up their set.

The Wayfarer is a relatively small venue, with a not so large stage. I was curious to see how CombiChrist was going to handle such a small stage when every member manages to use up every inch of floor space they have. Even the drummer. As the notes to the opening song hit, the small stage was not going to stop lead singer Andy LaPlegua from jumping, stomping, and running around the stage. LaPlegua sings with such a ferocious energy, that you can’t help but get pumped up by his vocals and start head banging. Guitarist Eric 13, wearing a Night Club branded jacket, was not going to be contained by the small stage. Often standing over the audience on the lip of the stage, or just walking around the club as he played. One thing I love about CombiChrist, is that they have bassist Brent Ashley performing lead on certain tunes and have Eric 13 as rhythm. This can be heard on tracks such as “Maggots at the Party.” Drummer Joe Letz is an experience. Performing in an outfit dubbed “Neutered Nancy,” he would constantly topple over parts of his drum kit, while playing causing a roadie to run out and fix it in the middle of the song, throughout their set. Before performing their final song, Letz brought his floor tom to the front of the stage, and had the audience holding it while he played the opening drum part. Hopefully, CombiChrist will be able coming back around soon to a larger venue that suits their high energy style.

All four bands have been bringing incredible energy and music to the patrons of the Sextreme Fest ’17 tour, but it was time for our headliner. It was finally Lords of Acid turn to take the stage and let the drug fueled debauchery begin. Performing their album Voodoo-U in its entirety, they opened the night with the first song of the album “Voodoo-U.” As if creating an acid trip for the audience, the lights went crazy, casting every color across the audience, strobes flickering constantly, and spot lights never lingering on one person for more than a few seconds. It was an assault on the senses. Singer DJ Mea came out wearing stockings, a corset, and cat ears looking feisty. As she sang through each song, she could barely be contained by the small stage as she ran, danced, and spun around the stage. Never letting her frantic movement lose the beat of any song. Founding member and programmer Praga Khan, was creating the foundation that every member of the band was playing to. Moving through each song on Voodoo-U, with themes of sex and drugs, Lords of Acid was creating an ecstasy-filled realm of pleasure in the Wayfarer that night. Letting the audience soak in every last moment of the trip they were taking. Lords of Acid came out for a two song encore, allowing for just one last spike of pleasure at the end of exhilarating experience.

Full Lords of Acid slideshow below:

The Sextreme Fest ’17 Tour brought out all kinds of people in cosplay and BDSM attire. Lords of Acid set out to not only bring music to the masses, but create an orgy of raw human sexuality, and did they succeed. Each band helped to create the illusion of a night out on the town, finding a partner, and taking things back to the bedroom. With Night Club getting peoples blood pumped up, and filled with excitement, to see where the night will take them. En Esch brought you to the industrial night club, where you could dance your heart out and find a partner for the night. Christian Death brought the grooving tunes that allowed you to sway and connect with the partner you found, touching each other and getting closer. CombiChrist had the high energy fuel that each lover has at the beginning of the romp, ready to do anything and everything, as you explore each other’s body. With Lords of Acid dropping in on the last act, allowing your natural animal instincts to take over as you two play all night. The show left everyone drenched in sweat from a pleasurable night, one that no one was ready to say good bye to. 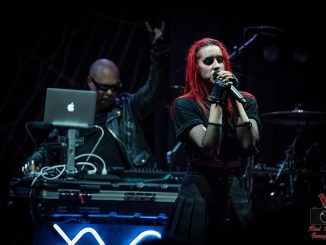 Interview With Emily Kavanaugh and Mark Brooks of Night Club 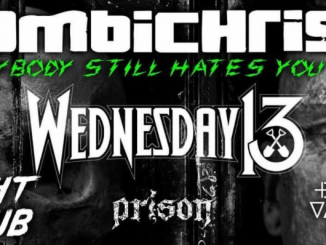 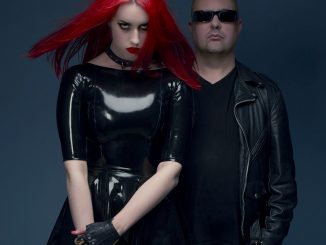 Catch NIGHT CLUB with COMBICHRIST and WEDNESDAY 13 on EVERYBODY STILL HATES YOU Tour!

1 Comment on Dropping Lords of Acid at the Wayfarer