While  Halloween was fast approaching, Matt Martinez and I thought we had already received our treats, when we were asked to cover the Loudwire Music Awards on Tuesday, October 24th. Alas, the Metal Gods, Ronnie James Dio and Lemmy, sought to give us more treats. So, we ventured out into the unknown area of Riverside, Calif., to cover one concert event that was certain to satisfy the ears. The Riverside Municipal Auditorium looks like an old church, which has housed a variety of performances, from ballets to school productions and concerts. In This Moment came down to this part of So Cal, along with Avatar and Of Mice & Men, for the Half God Half Devil tour. All Hallows Eve had come early, and the show was a horror delight

Up first to the stage, was Swedish industrial metal band, Avatar. Due to some unforeseen traffic, we unfortunately arrived late to the venue, and were only able to catch the last two songs Avatar played. Just getting a taste of Avatar with “Let It Burn” and “Smells Like a Freakshow” wet our whistle for a performance that we sadly regret missing. Avatar is a very theatrical band, that fits this bill perfectly. Lead singer Johannes Eckerström and the rest of the band dressed in an attire, that was akin to classic circus ringmasters. Avatar will be headlining their own world tour in the beginning of next year, and will be coming through Southern California at the end of January. There is no way we will let traffic prevent us from experience this band next time.

It was time to get the mosh pits going, with Of Mice & Men coming to the stage next. It is our second time this year seeing them, and they have not lost a step since July. Bassist/vocalist Aaron Pauley is a force to be reckoned with on the bass. Ever since original frontman Austin Carlile left the band due to medical issues, Pauley has filled in nicely, at not only screaming to the top of his lungs, but also singing harmoniously. He is a double threat while singing, and has brought renewed energy to the group. Lead guitarist Phil Manansala, still shreds a mean solo, while Alan Ashby riffs vicious, rhythmic, guitar licks. Valentino Arteaga was a resonating might behind the drums, the best seat in the house. They kicked things off with their recently nominated single, “Unbreakable,” which will be part of their newly announced album, Defy, which is set to release this coming January. A majority of the chosen songs they performed came from their 2014 masterpiece, Restoring Force, which included “You Make Me Sick,” “Bones Exposed,” and “Never Giving Up.” The fans roared with excitement, for the wall of chaos could not be contained. They are still great live, if not better from the last time we saw them. I cannot wait to get my hands on Defy when it is released next year.

Full Of Mice & Men slideshow below:

Just before In This Moment took to the stage, we were treated to a variety of ghoulish songs in the spirit of Halloween. From “Ghostbusters” to “Thriller” and “The Monster Mash,” darkness fell across the land, on this joyous occasion. Just before the curtain raised, Journey’s “Don’t Stop Believing” hit the airwaves and everybody started singing along. Interesting way to pump us up, but I will take it.

The lights dimmed, and the room was pitch black. The fans hollered in excitement, as soon as the curtain was drawn back. Hitting the fans with the classic tune, “Blood,” In This Moment gave the fans a spectacle of a show. Maria Brink is, without question, one of the most talented singers today. She has this way of drawing crowds in with her scintillating voice, as well as her variety of costume changes, that fit the mood of each song performed. For example, when “Black Wedding” hit the room, she and her dancing girls, who were marvelous to watch, came out in a black wedding dress. In the middle of the show, Brink steps aside so her boys in the band, led by lead guitarist Chris Howorth, can show off their skills with a “Monster Jam.” During the jam, drummer Kent Diimmel, who is the newest addition to the group, broke out into a solo that reenergized our Halloween spirits.

Having recently released the critically acclaimed album, Ritual, In This Moment gave the fans a good array of songs to sing to. Some of the songs played included “On Lord,” “River of Fire,” and “Lay Your Gun Down” from the new album, while also performing the classics “Sick Like Me” and “Adrenalize.” I was a huge fan of their cover of Phil Collins’ “In The Air Tonight,” it was beautifully eerie. Just before closing out the show, Brink came back out give the fans their encore treat, the In This Moment classic, “Whore.”

Full In This Moment slideshow below:

The demons were out in Riverside that night. From the freakish Avatar, to the pulsating Of Mice & Men, and the mesmerizing In This Moment, this was a great concert to attend right after the Loudwire Music Awards. The Riverside Municipal Auditorium was the perfect venue to host this type of show. Though traffic was a bitch getting there, it was definitely worth the trip. Each group worked their magic, and the crowd took all in. To In This Moment, Of Mice & Men, and Avatar, I salute you. Horns up!!! 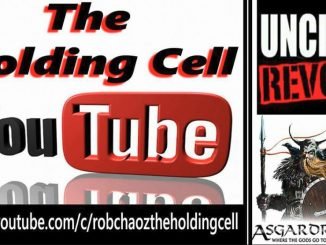 DJ Rob Chaos in back in The Holding Cell 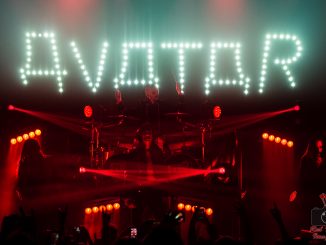