I said it before, and I will say it again, 2017 has been a great year for me. Not only did I get to interview a bunch of rock stars, but I also got to attend many shows. I have lost count because there was too many for me to count, but I would have to say that Matt and I went to almost 75 concerts this year, not counting festivals and the Loudwire Music Awards. The one venue I went to a lot this year happens to be my favorite local establishment, The Observatory in Santa Ana, Calif. Many artists have performed there this year, from up-and-comers like Fused By Defiance and Thrown Into Exile, to bona-fide headliners like DevilDriver and Royal Blood. Well, more rock/metal action came to Santa Ana, with groove/thrash metalheads Butcher Babies and rap rock giants Hollywood Undead. This was the last stop on their insane co-headlining tour, and they were determined to go out with a bang!

After a rap duo warmed up the crowd, vicious metal took flank with the Butcher Babies leading the charge. Fronted by the fierce, yet sexy duo Heidi Shepherd and Carla Harvey, the heavy metal soldiers in the crowd were thrilled to return home. Most of the material that was performed came from the newest achievement, Lilith. It was awesome to watch Harvey and Shepherd trade off snarls and screams, both of whom were at the top of their game. With songs that ranged from “Headspin,” “Huntsman,” and “Burn the Strawman,” metal was in full force. They even played my favorite, “Monster’s Ball.” Chase Brickenden, the new drummer, held his own and brought forth the thunder on the drum kit. He brings an extra kick to the group’s ever evolving sound. Whether it was moshing, jumping around, or flashing the middle finger, the fans gave all their love and support. The Butcher Babies ended their set with the funky “Underground and Overrated,” where Shepherd got in the middle of the crowd and we mosh around her. I enjoyed hearing the new songs live. It is always awesome to see the Butcher Babies.

I will admit, I have heard mixed things about Hollywood Undead. Some like them live, and others feel let down. It was my first time seeing them perform and I was curious to see what made them fan favorites. They started things off with “Whatever It Takes,” which is featured on their latest release, Five. Immediately, I could see the energy soar from the audience, singing along to the lyrics. Each member (J-Dog, Funny Man, Charlie Scene, Johnny 3 Tears, and Danny), were MCs in their own right and took turns busting out a rhyme. They were different from rock bands I have seen in the past; they can be both poppy as well as heavy. From “Undead” to “War Child,” “Renegade,” and “Riot,” Hollywood Undead brought some serious heat to their set.

Not only do they rap, some of them actually play instruments. Danny handles the keyboards while Johnny 3 Tears tackles the bass and Charlie Scene shreds on guitar. What was really impressive was their cover of the Johnny Cash classic, “Folsom Prison Blues.” While in the first 3 songs the group wore their signature masks, they played unmasked for the rest of the night. They are really talented musicians, and they have such a connection with the fans. Right before they performed their first encore “Everywhere I Go,” the fans were singing the words before it even started. Now that is true fan loyalty. The rap rockers ended the night with the fan favorite, “Hear Me Now.”

It was an entertaining night to hear some exciting rock ‘n’ roll. I have to admit, I thought it was an unusual tour because both bands played completely different genres from each other. However, it actually went together very well, and the fans loved it all. Not only did they get to bang their heads to the ferocious melodies of the Butcher Babies, but they also got to rap along with Hollywood Undead. I am still trying to get a real feel for Hollywood Undead, but they did peak interest in their music. I cannot wait to see what the future holds for them. To Hollywood Undead and Butcher Babies, I salute you. Horns up!!! 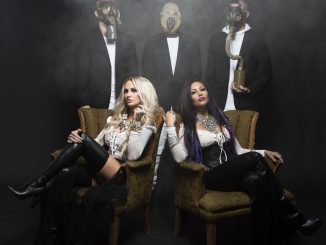