Firepower will be the metal Gods Judas Priest’s 18th studio album, and the first since 1988 to be produced by the producer of their classic albums Tom Alom. Frankly, it’s a fucking juggernaut of a classic Priest record. I was skeptical, and didn’t care for Redeemer of Souls, and was put off by KK Downing’s absence due to retirement, but God damn this is classic Priest in the modern world.

The title track, Firepower, the second single from the album, starts off seriously strong, from the beginning riff, you say “FUCK YEAH!!!,” as you headbang so hard, you get whiplash. The band is tight, and Glenn and Ritchie definitely are in each other’s back pocket, and it’s a perfect fit. The song itself reminds me of a mix between the Defenders of the faith album mixed down with Painkiller, the whole band is on fire.

Lightning Strike, is another banger with a galloping riff, and a powerful anthem. Halford still has it, I mean granted he isn’t in his 20s or 30s anymore, but I’ll be damned, his voice has aged so well. This album so far, is like a punch to the nuts. The dual war like harmonies on the solo, is just so beautiful and minimal. You feel like a Viking, pillaging an enemy village as berserker; it really makes you feel powerful.

Evil Never Dies, has a riff that reminds me of Demolition in a way, but the way it should’ve fuckin been, with Rob, less industrial elements, and better lyrics. But it’s that level heavy wise. ‘beware there’s voodoo in the night, evil never dies.’ Hell yeah. This is pure classic heavy metal in its purest form, with a clean modern production. It’s everything you’d want from a Judas Priest album. Metallica wishes Hardwired was this damn good. Has a nice soft break, reminiscent of The Sentinel, and builds up with a nice groove, and goes back into that sick opening riff, followed by a blistering solo, and back into the chorus, Halford wailing his balls off.

Never the Heroes, starts off with a defenders like synthetic vibe, with a big cannon 80’s drum roll into a riff that sounds like a heavier Turbo, with a bit of Angel Of Retribution, with a vibe that has the qualities of Desert Plains and Worth Fighting For. It’s amazing that a band of this age can still put out music that’s of the same quality as 20 years ago. I was interested in this album based off the album cover, and as a diehard fan since I was 7, this record is the best they’ve done in eons. Fresh and crisp but authentic and energetic.

Necromancer, starts with a Painkiller era like riff, some nice eerie keyboards and definitely has the pace and vibe of that album. Fast, hard, and full of power, spewing molten metal, ‘sorcery abound necromancer deaths guiding light’, oh yeah. My God, not one bad riff or off song. Are we in 2018 or 1984? Hard to tell. Incredible power. Fuck. The inner kid in me comes out, as I break out air guitar thrashing around. This is what metal is all about.

Children of the sun, has a bit of a chilled out opening riff, and groove. Definitely is classic Priest, circa ‘82. Almost a modern Metal God’s like anthem. A great hook and heavy riffs, Halford hitting his signature high notes, a nice mellow break. Very beautiful clean vocals, that build, it’s majestic. It’s also like KK’s spirit never left. The band’s spirit was as a whole, clearly. Bless Ritchie, I first doubted you, but my hats off to you mate, well done.

Guardians , is a soft, beautiful piano starting off, something I haven’t heard since Sad Wings Of Destiny. It’s sounding epic, and the guitars form a slow building guitar symphony, which Metallica would later use on everything. Shifting into Rising From Ruins, with a metal riff that’s just epic as fuck. They haven’t done this since Hellion/Electric Eye. Wailing guitar adding to it. And then goes soft for the verse, creates a beautiful atmosphere, soulful. And then the Viking ship continues on. The lyrics speaking of resisting darkness, and pushing through the storms that life brings.

Flamethrower, starts with a sick 70’s style Priest riff, almost sounds like something from Stained Class. This is a very nice touch. It’s a great track, powerful as fuck and definitely fits on the album.

Spectre, starts soft and builds into an epic slow Priest head banger. Amazing guitar work. Amazing vibe. I’m ten songs into the album, and there’s nothing on it I don’t love. There’s a middle section that has a little section, that seriously reminds me of the breakdown in Night crawler, and the symphonic guitar harmonies between Glenn and Ritchie are absolutely sublime.  “Trapped inside the mind of the spectre.” classic Priest lyric.

Traitors Gate, begins with a beautiful medieval intro, that launches into a juggernaut of a riff you’ve not heard since Painkiller. Holy fuck, my favourite riff on the album by far! There’s a guitar break with the beginning of the verse, building in both anticipation and epic quality. Images of battling evil beasts that threaten our lives, it’s so powerful. A metaphor for being a metal head, artist, outsider, weirdo in a sick society like ours.

No Surrender, begins with a Turbo– like vibe but heavier. Amazing fretwork, and great solo. I personally loved the Turbo album, this is just what Turbo would sound like, if stripped down and heavier. It’s amazing. Epic as well. There’s not one song so far that isn’t epic in its own way.

Lone Wolf, starts off with an almost Jugulator intro with a Demolition like riff, stripped down once again, kind of Sabbath like in a way. It has a groove to it, which Priest is known for.

Sea of Red, begins with a sublime acoustic. Atmospheric, floaty, beautiful, medieval acoustic guitars. Clean vocals, absolutely beautiful and majestic. Builds up epically, so heavy, and just beautiful. A chorus of ‘sea of red there’s stories to be told, sea of red as years go by, memories unfold, bow your heads, ‘ it’s not really them singing about themselves per say, they sing it in a way, that it translates to every single human being on the planet, and it’s just great.

What can I say? Other than, I am extremely happy and proud to wave the Priest and metal flag today. An event in history. The first time in a very very long time, I can say that this is absolutely the definition of a modern metal classic, by a band that’s been making albums since 1974. 14 amazing songs, and not one skip or “eh it’s okay” thoughts. As a diehard fan of old school Judas Priest, please do not overlook Firepower, just because KK isn’t there, or it didn’t come out in the 80s or 70s. This is a true Judas Priest album, the classic album people beg for, from bands of this caliber and longevity, to still make a truly great album 100%. Comes out March 8, availible on pre-order right now. Bless the Metal Gods. 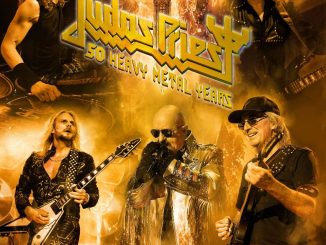 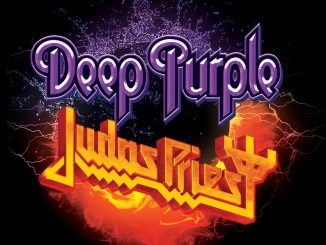