If you metalheads are looking for a band that is driven by passion and intensity, with a symphonic edge, then look no further than Winds of Plague. Matt and I have seen these guys twice in one year, and they are nothing but full of gut-wrenching awesomeness. They are led by one badass frontman in Johnny Plague. He shows such command and brutality on stage, with his rip-roaring vocals. What’s more, we are actually friends and co-workers for Halloween Haunt at Knott’s Berry Farm. It is always nice to have musician friends, especially when you have a common love for Halloween. He and Winds of Plague recently put together their latest LP, Blood of My Enemy, and it is arguably their best effort as of yet. I got the chance to do an email interview with him and get the lowdown on the album and some aspects of his life.

– Hey! I’m doing well, just winding down from the day.

– We created this band in High School and named the group ‘Bleak December’ from the Edgar Allen Poe poem. Apparently there was another band out there with the same horrible name so we had to choose another which we decided to go with ‘World War 3.’ Luckily we realized that was also a horrible name so we named the band ‘Winds Of Plague’ from the Unearth song “Endless.” Third time’s a charm I guess!

– When I was about 10 years old my mom took me down to the record store and asked the young lady working at the store for a recommendation to what all the young hip kids were listening too. The nice young lady sold my mom on the latest Boys 2 Men album. My dad, being the biker gang, Vietnam veteran, badass that he is was having none of this Boys 2 men nonsense so he quickly took me back down to the record store where I got my first Metallica ‘Master of Puppets’ cassette tape. It was at that time, with that record that I realized I was born to be a metal head.

– I think the biggest new approach was simply taking out time. We didn’t have any impending tours, no deadline from the record label, it was total creative freedom and i think the time that went into the record really shows in the quality of songs.

– Overall i think life is amazing filled with happy moments… but there are times in everyone’s life where it sucks and it’s hard to get through. In my times of despair I have learned to use heavy music as an outlet of emotion and able to channel the negativity into something positive. I call this “Heavy Metal Therapy.” These songs are just a product of some of the darker days I’ve had. Each one comes from a different place, but it’s my way of sharing my story and motivation to overcome any and all obstacles.

– They all had their challenges, very few went totally smooth, but I’d say “Dark Waters” just because we wanted the chorus to come across hard and heavy but have a clear and identifiable melody in the vocal arrangement.

– Alana had been clear of the band for a while before we started getting into the record, so it didn’t really affect the product. Adrienne actually came aboard when the record was finished. Her vocals were added after the fact. I had previously tracked my own vocals and we decided to experiment with her doing the parts instead. It was so good that we decided to go back into the studio and make the changes which once again prolonged the release of the record.

– Adrienne is an incredible person and musician. She has more talent than all of us put together. She not only brings a vast knowledge of music theory but she has a beautiful singing voice and a gnarly screaming voice. I really hope to explore more of the use of her voice on future records.

– I wouldn’t say I’ve always had a passion for Halloween and Horror to the degree that i do now but when I started working at Knott’s in 2005 I quickly fell in love with the season and all its offerings.

– I’d say it’s different. I find long term fulfillment in creating attractions for hundreds of thousands of people to come and enjoy but for music there is a indescribable high I get from being on stage, screaming my heart out that quickly goes away after the show and I’m left looking forward to the next show.

– I’ll support whatever it is he wants to do. If he has an interest in metal than I’ll show him some cool shit.

– My fav new band at the moment is ‘Bad Omens.’ We worked with Noah and Jolly on Blood of My Enemy. Those guys are insanely talented and have an admirable drive. For such young guys they are taking the world by storm, and I can’t wait to watch the rest of their promising career unfold.

– Rolling Stones. I like the more raw and gritty sound.

Johnny is one cool dude to hang out with. To recap, Winds of Plague is a band that every metal fan should get involved with. With this new album, the future is looking for them. To Johnny Plague, I salute you. Horns up!!! 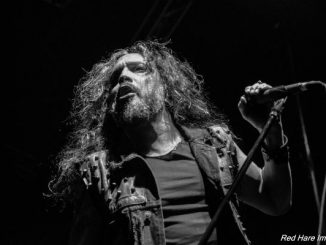