Billboard chart-topping hard rockers MOTOGRATER have a packed 2018 ahead of them, following on the heat generated from their long-awaited second album, 2017’s Desolation, released on Megadeth bassist Dave Ellefson’s EMP Label Group. Most recently, the band announced several spring and summer tour dates, set to begin on May 6 in Las Vegas, NV. The set of dates will run through June 2 in Pipestem, WV when the band performs at Metal in the Mountains. Two more festival dates will follow in mid June and July. See below for all currently confirmed tour dates.

Guitarist Matthew “Nuke” Nunes says, “We are so excited to finally get back on the road! We have a deadly new line-up and are ready to crush the stage every night. C’mon out and witness the beautiful mayhem we will ensue upon the metal masses!”

Stay tuned for the upcoming release of a brand new music video for the band’s second single, “Daggers”, directed by Matt Lord Zane in Los Angeles. The band is set to begin writing their third full-length album in the fall.

“The future looks really bright for MOTOGRATER at this point,” says Nunes. “You may ask ‘why are we still relevant?’ Because we write good songs. Because we believe our recordings and our live shows speak for themselves. The sky is the limit, really.”

About MOTOGRATER
Forming in Santa Barbara, California the mid-90s, MOTOGRATER honed its creative industrial/tribal sounds and samples through playing and recording, and signed with Sever Records, founded by Dez Fafara of Coal Chamber and DevilDriver. MOTOGRATER evolved further thanks to dark, groove-oriented guitars, and in 2003, the band inked a deal with No Name/Elektra Records, and put out its self-titled major-label debut to critical and fan acclaim.
2003’s acclaimed Motograter (Elektra Records) album launched a fiercely unique heavy rock band that was a breed apart from the nu metal masses, thanks to tribal body paint and the Motograter itself-a hand-made instrument created from industrial cable and guitar pieces that creates a singular bass sound. The 2003/4 radio singles “Down,” “Suffocate” and “No Name” put the band-then fronted by Ivan Moody (Five Finger Death Punch)–on the map. “Suffocate” landed in the film The Texas Chainsaw Massacre; “Down” cracked the Top 3 BillboardMainstream charts; and Motograter toured on Ozzfest 2003, as well as sharing stages with Korn, Marilyn Manson, Cradle of Filth, and many more.
After going on hiatus in 2005. They reformed in 2008 with a new lineup, putting out the Pre-Release EP in 2009, while their The Damned Holiday Tour thrilled old fans and made new ones. After touring and performing for the next few years with artists such as Pop Evil, Slipknot, Five Finger Death Punch, Danzig, Anthrax, and more, MOTOGRATER discovered North Carolina native James Anthony Legion in 2015, and in early 2016, began recording their latest album, Desolation.
MOTOGRATER is:
Matthew “Nuke” Nunes – guitars
James Anthony Legion – vocals
Jesse Stamper – guitars
Jonathan “Zero” Price – percussion/samples
Ryan Ramirez – drums
Casey Cahill – Motograter
MOTOGRATER Discography:
Desolation (2017) LP
Pre-Release (2009) EP
Motograter (2003) LP 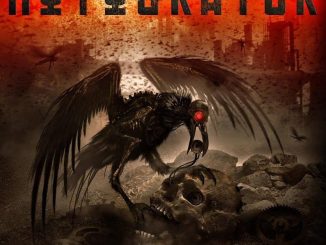 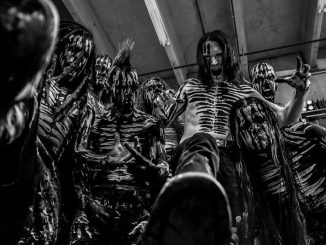 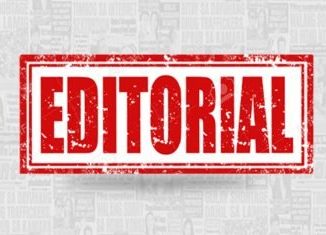