It is always fun and exciting to learn about new groups that are making a run in the music scene. So many questions go through one’s head: are they good, where are they from, who is in the band, and where do they come up with their sound? That was the case with Brooklyn, N.Y., own Eyes of the Sun. A trio act that dives into the sludge and doom sounds of heavy metal, I was caught in excitement of the unknown. When I wanted to learn more about them, I got that opportunity by speaking with their bassist/vocalist, Jeff Blanchard. It was time to get personal and see what makes Eyes of the Sun so special to him.

I first asked him how the band got their name. According to Blanchard, with some of their songs talking about the destruction and chaos going on Earth, it is basically what the Sun is seeing from its perspective. He talks about how he and guitarist Miguel De Jesus Jr. came together wanting to start a project in the doom metal scene, and working with another before current drummer Chris O’Neil joined. The group is about to release their debut album, Chapter 1, and Blanchard tells me how it is different from other doom metal records, adding a little bit of a Pink Floyd trance into it, something De Jesus Jr. is influenced by. O’Neil, who goes by “Doctor Thunder,” is originally a thrash drummer, but Blanchard wanted him to join and his style mashed well with Eyes of the Sun’s sound. We would talk about where the inspirations came from when writing their songs, particularly with “Slavery of Another Name.” While his personal favorite is “End of Origin,” the other two members really enjoy “Sound the Horns” because of its faster pace.

We would talk about how Hurricane Sandy destroyed their studio and equipment, but they were able to save their recordings. Instead of using Go Fund Me to get new stuff, the non-profit Music Cares helped them out along with other bands that were affected by the devastating storm. The band is preparing a showcase at the Gramercy Theater in New York for their label, Blacklight Media Records, which is being hosted by the Metal Ambassador, Jose Mangin. Founded by celebrity chef Chris Santos, Blanchard talked about how Santos was able to sign the group to his brand new record company. Outside of music, he says he is either running his bar or riding his Harley Davidson..

We finished up the interview with talking about the Beatles vs. the Rolling Stones, and he gave advice for younger bands looking to enter the scene. He is a man who loves what he does, and is not looking to be a rock star. He just wants to play his music, have fun doing it, and have the fans enjoy it as well. I look forward to seeing where Eyes of the Sun’s journey will take them, hopefully to Anaheim soon. To Jeff Blanchard, I salute you. Horns up!!! 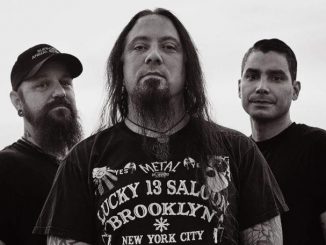