The last time that KISSING CANDICE made an appearance in Rhode Island, was around this time last year with A Killers Confession. This time around, they come with friends I Set My Friends On Fire, and played to a sold out room this night. I was eager to see the NY band again, because last time I was just learning and indulging in the visual and musical adventures these guys have to offer. So, this time around I was already familiar with the band, and have had BLIND UNTIL WE BURN and the newest EP, SAFE WORD on nonstop rotation, so I was ready to get a dose of live show debauchery.

So, the stage got set and the progression of the band’s masks were unleashed, the band got up onstage and just had the energy, the drive and the heaviness that we have all come to admire. Everything about this band has evolved, visually, as well as the musical sense. Musical wise, they brought a tightness and more gelled appeal to their set this time around. The movement on stage hyped up the crowd, and Joey sounded deliciously on point. The new songs (DE) GENERATION, HIT THE ROOFand TILT were probably my favorite of the night, because of the driving heaviness, and just felt like the songs were written for the stage.

I was curious to see how the crowd on this tour package, would take the band and people were so into it, and reckless with love, that it showed that the members of KISSING CANDICE can win over anything put in front of them. Although some people, at first might not get the band and the visual aspects they express, if one looks beyond that point, and really get to know what the guys are speaking about in their lyrics, we can all relate to them. To anyone thinking they are a gimmick band you are so far in left field. This band has talent, they have musical integrity and put on one hell of a fun show. If you can check out a show on the rest of the tour, go for it; I’m telling you, you won’t be disappointed. Pick up some merch too, because they have some killers stuff out on the road with them. Here is a little snippet of my point of view of a night with the mighty KISSING CANDICE. Thank you guys, for the music!!!! 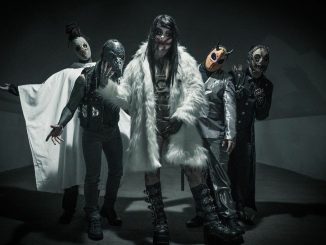