By Paige James, Photos by Out with Ambler

Tuesday nights show was an amazing display of just how rock and roll can transend through the years and still capture an audience of ALL ages. This fantastic event took place at Phase 2 in Lynchburg VA.  The venue had 2 lines wrapped around the building in anticipation to see the 3 bands that would be playing that night including legendary band BUSH.

The show started early to insure the show went off right. Big Jesus started the evening and played some great songs entitled Lock and Key, and Gold Forever.

Australian band Atlas Genius really got the crowd moving and with a good cover of You Spin me Round and finishing with one of their hits called molecules.

The stage darkened and instruments sounded to an all to farmiliar BUSH tune called Zen. Even 24 years later, the song sounded just as great as when it was released in 1994.  Lead singer Gavin Rossdale sang beautifly as he performed on stage in denim pants and paint stained shirt. The talented musician showed the crowd no mercy as he began to belt out amazing hit after hit such as Chemicals, The Sound of Winter, Greedy Fly, Swallowed, and the Gift. Gavin is such a sweetheart that during The Gift he came over to a lucky young girl and basically serenaded her (which in itself is likely something that most of the grown women, including myself,  in the audience secretly dream of). The entergetic star decided to heat things up during Little Things by moving along the full stage,  jumped off stage and going out into the crowd. Full crowd participation insued as Rossdale decided to dance on bar tops off the sides of the main floor and even had to soldier through partons after one exuberent fan tried to take him home right there on the spot. The show did not slow down there. The entire band rock out the final songs that EVERYONE sang to: Machinehead, R.E.M’s The One I Love, Glycerine, and the Final showstopping song Comedown. The entire show was an experience worth having and if you have an opportunity to see BUSH it is a show that can take you “back in the day” and still have you presently impressed with just how amazing the band STILL is to date. 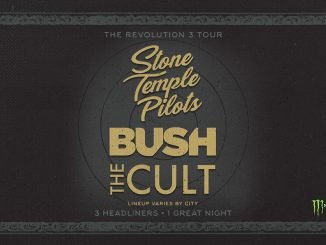 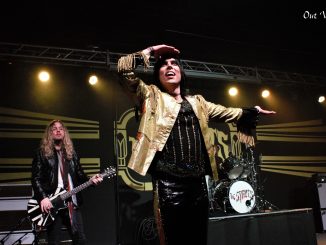 The Struts and Mona come to Phase 2 in VA 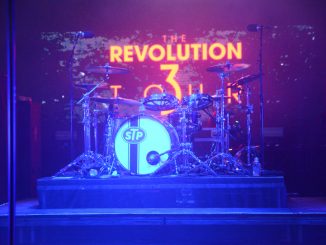 Bush, Stone Temple Pilots, & the Cult Are a Revolution of 3 in San Bernardino