The Smokin Prophets are a kick ass, no bullshit, punk influenced rock n roll band. Like the Ramones meets GnR, these 3 guys just burn the house down with pure adrenaline and determination. Their debut Deceived Diseased is a crash course, punch in the face of a rock n roll record.

You Better Run starts the album off with a rumbling bass and a 1234 count, followed by FUCK Yeah and the rockin begins dancing on all of your face. An attitude filled, angst song about people who waste your time and stand in your way. Punky, glammy, anthemic, and full of snotty attitude. What a fucking relief, we need rock like this again. It’s got the hooks of Green Day, the venom of New York Dolls, and some good ol GNR thrown in. The future of rock n roll is here

The Innocent is an absolute anthem, with a heavy bluesy sleazy riff. Powerful, uplifting, and just makes you go, woah holy shit. Marty’s unique voice reminds me of somewhere between Johnny thunders, Kurt Cobain, and Tim Armstrong from Rancid. He doesn’t sound like anyone else, and that’s what helps make these dudes great. A real rock frontman with no ego, and just a drive to create good music. When he screams ‘Bring ‘em fuckin down… ‘ ya just wanna let the ropes go and let the corrupt bastard hang from the gallows. Fuck that riff and solo could melt fucking iron.

Pumped up starts with a sick opening riff, with some nice reverb and fist pounding drums. The bass is holding its own creating melody. It starts off soft but then hits you in the balls with a sledgehammer out of nowhere. Anthemic, melodic, and pissed off. A perfect balance of floaty passages and abrasive punk. Jayke does some back and forth vocals with Marty, while handling that bass laying down the groove. Fuck these guys are so God damn tight, it drives me insane.

Liability is a banger anthemic piece, proudly both glam and punk. It speaks of being a target in society which any true rocker can relate to. All the right whoa’s during the bridge, taking the piss out of modern society, which has never and will never go out of style. These dudes literally capture the true unadulterated rock n roll attitude, and they got some of the best tunes around these days. No bullshit pop or rap infused commercial rock, this is down and dirty unfiltered rock n roll, stinking of whiskey, cheap cigarettes and sleaze oozy from a punch in the face.

Gonna Make It is a raw anthemic punky song, with obvious hints of Johnny Thunders and Motley Crue. Full of determination and retribution at the same time.

Don’t Hold Back has the sickest opening riff and goes into a balls out, raw song, built on the riff and energy. And a positive song just basically saying fucking go for it, don’t waste who you are for mediocrity. Empowering, uplifting, and intense.

Longing For You starts with a soft clean intro, it’s a ballad but you can feel it’s true, it’s not corny. Has a Johnny Thunders vibe, it’s beautiful, and it’s real. It’s something we can all relate to. There’s something about it that sucks you into the realm he’s creating with his words, in your head. This is a surprising one. They can rock hard, and then can write something beautiful and heartfelt. Amazing.

Do You Believe brings us a bone crunching intro and a twisty curvy heavy riff. A pounding verse to go with it. Taking a few jabs at religion, speaking some truth that everyone who can think for themselves has thought about. Very Skid Row vibe here musically.

Lost hope is a fuckin awesome track, one of my favourites. Crushing riff, pissed off vocals, and just pure energy and aggression. Sounds like GNR circa 1991 meets The Runaways.

The album closer, Trade The World is a final call out for all of us rockers and outsiders to band together and bask in the glory of rock n roll, and everything it brings us. It’s got a fucking great riff and groove, ‘sometimes you fight it  sometimes you fall, but when ya rise you can trade the world.’ nuff said.

This album is a fantastic mix of glam and punk, pure rock n roll in my opinion. Nothing overly technical, and just pure unadulterated rock. These guys are what the world needs. This album is a perfect debut album. Hungry, feral, and out for blood, The Smokin’ Prophets are the future of rock n roll. 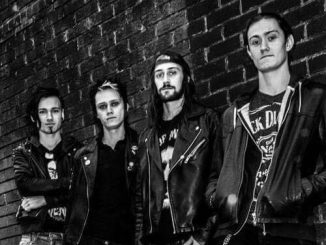 Interview with Marty of The Smoking Prophets 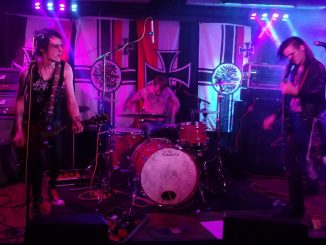