My friends let me be the first to welcome you to Unfriendly Studios. It is a hidden musical gem in the heart of Los Angeles. Started by legendary metal promoter Metal Sanaz, Unfriendly Studios is a music venue that operates as a lounge for band meets, music video shoots, birthday parties, and of course, live music. Believe it or not, it is located just behind a truck depot. It is like I said, “a hidden gem.” I have I heard of this place, but yet have to visit it myself. Fortunately, my boy Matt got us that opportunity when Chase the Comet booked a show there. This is an alternative rock group from Moscow, that is looking to leave their footprint upon the music scene in the U.S.A. They decided to perform at Unfriendly Studios, because it was an album release event for their latest LP, Rush ‘N’ Rule. Matt shot them a few weeks ago in Long Beach and was invited to shoot the event, and brought me along.

Chase the Comet charmed me right away, as soon as they went into their opening number, “Hollywood.” Nika Comet is real sharp on the microphone. She has a sweet, melodic voice that would give Paramore’s Hayley Williams a run for her money. By the way she was singing and dancing up there, I could tell that the stage is where she feels free. Along with guitarist Alexander Mishustov and drummer Elliott Samson, they have the means and talent to bring back alternative rock to its former glory, that it originally achieved in the 1990s. Mishustov has some of real skills with his riffs, giving some of the songs like “Rage Inside” and “Burned Again” a heavy metal texture. Samson is steady and swift on the drums; he relies on simplicity to make to songs sound superb.

The band adds different elements to their alternative sound. With “Happy Baby,” it has a sort of punk rock makeover, while “Enjoy This Rock ‘n’ Roll” has a crunchy blues riff. Nika pens the words to the music, which usually comes from personal experiences she went through in life. For example, in “Happy Baby,” she explains about the days where she was into weed and alcohol, but is blessed to be sober for one year. A milestone she should be proud of. She also had the opportunity to do a solo number with “Isn’t It Time.” The piano was performed by Vasily Pinchuk on Rush ‘N’ Rule, but it was programmed on the laptop. Nika brings emotion and sorrow to her voice, which is very beautiful. Then they went into happy mode with “The Dream Team,” one of Nika’s favorite tunes, and a testament to the band’s chemistry. My favorite was the eerie ode to the legendary musicians who passed on at the age of 27 (Jimi Hendrix, Amy Winehouse, Kurt Cobain, Janis Joplin, Jim Morrison, etc.), called “The 27 Club.” They ended the night with the alternative anthem, “In Music We Trust.”

Unfriendly Studios was feeling friendly with Chase the Comet. They brought alternative joy to the fans that came to hear their new tunes. After hearing the songs that are featured off the album, I feel that Rush ‘N’ Rules elevates them to new heights. Sanaz has one fine venue to help promote artists/bands like these guys. When I entered, I was thrown by its gothic atmosphere that metal fans can come to appreciate. Nika and her Russian comrades were smart to bring their sound here. They have made Mother Russia very proud. I look forward to seeing what their future brings. To Chase the Comet, I salute you. Horns up!!! 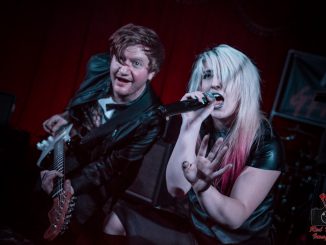