For the past year, there has been major unrest in the world of Swiss metal band Ghost. Its charismatic frontman Papa Emeritus III, the group’s third leader, who has led Ghost to Grammy glory, was dragged off the stage during a show in Gothenburg. According to sources I heard online, he had failed in his band’s mission and was taken out. The question then became, who would emerge as Ghost’s new unholy emissary. Well, we found our answer in the flamboyant Cardinal Copia (Tobias Forge). There is major pressure for the Cardinal since a devilish Pope had fronted this glorious metal outfit. Heading in new territory, Cardinal Copia is out to deliver a new message of “death and doom” with Ghost’s latest chapter, Prequelle. Let us listen in, and see if the outspoken priest can accomplish the mission of overthrowing governments.

Cardinal Copia and his pack of Nameless Ghouls took me by the hand, on an epic journey of the plague and apocalypse during the dark ages. His voice on this record is a lot tamer than before, but you can hear the joy in his singing. He brings both pleasure and despair; almost making doom a beautiful thing to celebrate. His Ghouls continue their endless streak of spellbinding riffs and melodies. I was particularly enjoying the lead guitar’s solos; mixing it up between classic metal and modern hard rock. The mystery that shrouds these musicians, continues to embolden them to take risks along with Forge, eh Cardinal Copia.

After giving the listener a tantalizing taste with the short beginning interlude “Ashes,” we start right in with the hit single, “Rats.” The songs talks about something being spread like crazy and destroying all it comes across, very quickly. It is an infectious song with an insane chorus hook. Strolling along, we come across “Faith,” a sinister doom metal tune that ends with a joyous choir. Only, the harmonious choir is then silent with a poppy rocker in “See the Light.” Cardinal Copia sends the message that hate is both food and drink to him, making him stronger than ever. Resting his voice during the instrumental “Miasma,” the Nameless Ghouls take flight in a progressive inspired symphony, which enriches my soul, led by a gleaming keyboard. It features an excellent saxophone number by Papa Nihil. Halfway through Prequelle, and I am feeling Ghost’s presence.

Probably the most risky song to date for Ghost, it was time to get down with “Dance Macabre.” I did say Copia was flamboyant, putting together the best heavy disco track since KISS’ “I Was Made for Lovin’ You.” Knowing that death is inevitable, “Dance Macabre” reminds us to be jubilant. After partying it up, “Pro Memoria” returns us to sorrows with a piano led down tempo number. Things start to pick up again with “Witch Image.” The lead guitar Ghoul performs an eerie solo, which can make a frightening image seem lovely. Resting his throat again, Copia has his Nameless Ghouls construct a medieval melody in “Helvetesfönster.” With each note played from each instrument, I envision myself in a forest, being enlightened by the sound of the music and its wonder. That does not always happen, so well done Ghost. Feeling refreshed Copia returns to close out the album with “Life Eternal.” A lighter tone in sound, the song asks the question: if offered eternal life, would you accept it? This is their more pop rock inspired song, and I believe this band nails it.

After enduring 40+ minutes of enriching rock ‘n’ roll, I have come to the conclusion that Ghost has continued to impress the world. Forge’s latest creation, Cardinal Copia, really allows him to stretch his wings and expand his horizon. While the overall mood is somewhat lighter, the heaviness Ghost is known for is still there. Prequelle is the quintessential metal album every metalhead should embrace and understand. If there was a frontman out there Ghost’s quest of dominance, Cardinal Copia is the right successor of Papa Emeritus III. To Ghost, I salute you. Horns up!!! 9.5/10 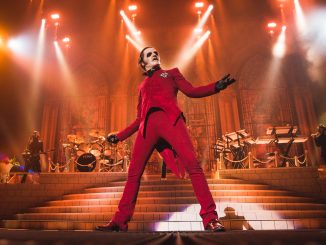