Finland is the land that has produced some of the most iconic symphonic metal groups. Some of those groups include Apocalyptica, Northern Kings, and Celesty. The one Finnish band that stands out the most in terms of critical acclaim and fandom is Nightwish. If anything, one could say that they helped put symphonic metal on the map. They are known for putting a gothic twist on the metal sound, and writing songs that sometimes deal with fantasy and mythology. After more than 20 plus years on the road, Nightwish has decided to put together a special tour to commemorate their time together. They put together a special set list of rarely heard songs played on stage. They announced their Anaheim performance last year for April, 2018. Matt and I were excited for them to come to town. As soon as April, 2018, appeared on our calendars, we stepped into the realm of Nightwish.

A clock appears on the screen, counting down till the point at which Nightwish make their presence known. As soon as the timer struck zero, multi-instrumentalist Troy Donockley serenaded the crowd, playing the uilleann pipes. It was like listening to a beautiful Irish melody. Not only can he play that, he also does guitar, the tin and low whistle, and bouzouki. All of a sudden, “End of All Hope” blared throughout the venue, electrifying the fans. Vocalist Floor Jansen, with her striking soprano voice, wowed the night. It was like watching an angel descending from the Heavens, and harmonizing our souls, which was evident when she started singing “Wish I Had an Angel.” There were times when the band went into their riffs/solos; she would headbang her head in a circle. Emppu Vuorinen was a spectacle to watch on the guitar, while keyboardist/founder Tuomas Holopainen was a synthesizing machine. Bassist/Vocalist Marco Hietala was a force of nature with his instrument; a true musical Viking with his beard and beats. Touring drummer Kai Hahto raged melodiously with each bang of his stick.

The night was filled with fantasy, mystics, and wondrous metal music. Nightwish brought a whole arsenal of songs that every fan enjoyed listening to. There is a song from each different era of singers the band has had over the years. A few tunes would be from Jansen’s period, while others came from the days of Anette Olzon and Tarja Turunen. With songs like “Élan,” “Sacrament of Wilderness,” “Deep Silent Complete,” “Elvenpath,” and “Come Cover Me,” I was falling deeper and deeper into the world of Nightwish. Right after “Dead Boy’s Poem,” Jansen exited the stage and the guys played the traditional cover “Elvenjig,” where Hietala played a double neck bass/guitar, riffing away on both fronts of the instrument. “The Carpenter” was my personal favorite, because it was a telling of Jesus. Being a Christian, that was cool to hear, especially watching Donockley break out his bouzouki.

Another personal favorite of mine was “I Want My Tears Back.” It was a fairytale song that had a folk metal feel, while still being heavy. Jansen got the fans to sing that chorus, which I participated in as well. I tell you people what; she brought the house down when she and the guys went into “Slaying the Dreamer” and the epic “The Greatest Show on Earth.” When she belted her heart out with “Ghost Love Score,” her voice would reach the highest summits of Mount Dio. I swear the Gods of Metal felt joy and honor listening to her. That was the way to cap off the evening.

Before that night, I did not have a whole lot of knowledge on Nightwish. However, now having witness the magic they bring to music, I have become an instant fan. A solid night at the Grove in Anaheim, and they were the only act of the evening. It was 2 whole hours of symphonic metal glory. It was indeed a true celebration of everything Nightwish had achieved over the decades. What made the night even more special, were the fans getting a free copy of their new compilation, Decades. I am sure going to enjoy listening to these fabulous songs over and over. It was a good evening for metal. To Nightwish, I salute you. Horns up!!!! 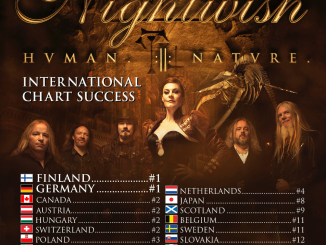 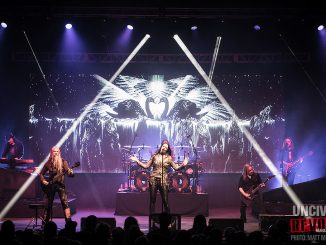