The heavy metal world is in full thunderous swing this summer season. A lot of bands are gearing up for what should be a fired up touring summer. From Five Finger Death Punch to Godsmack, Breaking Benjamin, and Shinedown, these are just a few of the rock artists looking to turn heads. What they have in common, besides between great hard rock/heavy metal groups, is that they will be stopping by at the FivePoint Amphitheatre in Irvine, Calif. Ever since the closure of the famous Irvine Meadows Amphitheatre in 2016, Five Point has become a fixture for concert goers in the Irvine area. What better way to kick off summer concert series than by hosting Slayer. One of the Big 4 of thrash metal is riding off into the sunset with one final epic tour. Seeing as Matt and I will never see Linkin’ Park, Motörhead, or Soundgarden, we were determined to not miss Slayer for what may be the final time they come through Orange County. To help them celebrate their legacy, Testament, Behemoth, Anthrax, and Lamb of God also came along to bring brutal fun to the metalheads.

This marks the third time seeing Testament in the past year. Chuck Billy and his band of thrashers put a tear into the Irvine crowd. It was weird seeing them being the opening act, for I would think Behemoth would open the show. Nevertheless, Testament looked to warm up the crowd and get the metal mojo going. Add the smoldering guitar work of Alex Skolnick and Eric Peterson to go along with Billy’s raging vocals, the fans got the engines revved up enough to start the twister of death. From “Brotherhood of the Snake” to “Practice What You Preach,” “The Pale King” and “Over the Wall,” Testament was a headbanging pleasure to see again. While I admit this performance was a little underwhelming compared to their headlining tour last year, they still brought it.

It was time for me to protect my soul, for blackened death metal artists Behemoth marched onto the stage. I have never seen this band before, but I was willing to give them a chance. A group coming all the way from Gdańsk, Poland, Behemoth donned on the pale makeup and played very fast extreme metal. I could understand what frontman Adam “Nergal” Darski was sawing, but I have to be honest, his hollowing death growls sounded cool. He also played some masterful riffs along with guitarist Patryk “Seth” Sztyber. The fans lifted their horns into the air, pointed to Nergal in union. Though their subject matter deals with Satan and the religion of Satanism, music is about freedom and the freedom to express what you believe in, which is what they do. The fans bashed into each other to the songs “Demigod,” “Ov Fire and the Void,” “Wolves ov Siberia,” and “O Father O Satan O Sun!” The Lord of Darkness was with Behemoth this evening.

Anthrax was the first band of the Big 4 to see live. So, I thought it was fitting for them to be on the road with Slayer, seeing as they both started at the same time. This also marks the 3rd time seeing the New York thrash metal legends. Joey Belladonna kept the mosh pits going with his high soaring voice. Anthrax has been riding high on metal glory since releasing 2011’s Worship Music and 2016’s For All Kings. Guitarists Scott Ian and Jon Donais were riff firing machines, blistering each solo and melody. With songs like “I Am the Law,” “Caught in the Mosh,” “Evil Twin,” and “Madhouse,” the pits just got faster and more intense. In fact, I actually saw a fan jump from the rafters into the VIP section, and then hopped over that rail just to enter the circle of torture. He even knocked over a table. He was not really supposed to be in pit, but that did not stop him. Anthrax would indirectly honor that loyalty by ending their set with the classic “Indians.” That’s 3 body-bashing groups down, 2 to go.

There was a light drizzle of rain that evening, and even with my jacket, my balls were freezing. However, thanks to the brutality of Lamb of God, who was next to hit the stage, my blood was starting to warm-up again. Ironically, the first time I saw the groove metal icons of Virginia, it was also the same night I saw Anthrax for the first time. They are still as vicious as they were 2 years ago. Vocalist Randy Blythe was kicking some serious ass on the mic, while also jumping on the slippery stage like a madman, starting with “Omertà.” Lamb of God has stood the test of time as one of the original leaders of the New Wave of American Heavy Metal movement. Lead guitarist Mark Morton was a surgeon, operating earth-shattering solos. Rhythm player Willie Adler and his drumming brother Chris were together, an unstoppable force with the speed harmonies. John Campbell is a pulsating bass player, bringing the thunder with each pluck of the string.

In the middle of “Walk With Me in Hell,” Blythe halted the performance because a fan got seriously injured in the mosh pits. I thought that was extremely cool of Blythe; making sure the fan got the help he needed. Taking about 5-10 minutes, he would joke with the fans, sign autographs, and thank the ambulance team for helping. That is the brotherhood of metal I have been saying, witnessing compassion and watching out for one another. The show would resume with the conclusion of “Walk With Me in Hell,” which led to “Still Echoes.” Along with “Ruin,” “512,” and the classic “Laid to Rest,” Lamb of God brought a lot of ferocious fun to the evening, leaving fans hungry for Slayer.

The stage was set on fire, with the Slayer sign standing tall. With flames popping up, out walked one of the pioneers of thrash metal: SLAYER!!! They quickly engaged in brutal warfare with “Repentless.” Bassist/vocalist Tom Araya was a beast, both on the microphone and his weapon of choice. He was ever so relentless whenever he screamed or hollowed to the Irvine crowd. Longtime guitarist Kerry King dominated on the guitar licks. He would share solo duties with his buddy Gary Holt, who was very fierce and slick. Holt officially joined the group in 2013 after the sudden death of founding guitarist Jeff Hanneman, and he has not let the Slayer elite down. Paul Bostaph was firing on all cylinders while on the drums; banging and crashing each drum and cymbal with fierceness and agility. It would have been cool to see original drummer Dave Lombardo on this last hoorah, but Bostaph won me over.

I always had respect for Slayer, but did not always like the group. It was not until this very evening that I saw what they brought and why the fans love them so much. Their aggressive nature and taboo subject matter (anti-religion, Nazism, war, etc.) have made them a huge draw over the years. They had a wildly chaotic arsenal of songs that included “Disciple,” “Mandatory Suicide,” “Payback,” “Jihad,” “When the Stillness Comes,” and “Dead Skin Mask.” As soon as Araya and company went into their iconic tunes like “Seasons of the Abyss,” “Chemical Warfare,” “South of Heaven,” and my personal favorite “Reigning Blood,” all bets were off in the bits. Matt and I locked our air guitars together and twirled our heads ever so violently. We were headbanging as if our lives depended on it. Slayer offered Orange County its final tune with “Angel of Death,” with all the fans ramming into each with excitement. With that, Araya bid Irvine a sad farewell.

I originally wanted to see Slayer just for the sake of seeing Slayer, but now having enjoyed their performance, I am a little bummed that they are drawing the curtains on their illustrious legacy. I woke up the next morning with a stiff neck from all the savage headbanging I had been doing all night. It was totally worth it. Behemoth was better than I expected, Anthrax helped create bigger mosh pits, and Lamb of God left a trail ruthless moshing. The evening was fierce and nasty, the way an extreme metal show should be played. To Slayer, Lamb of God, Anthrax, Behemoth, and Testament, I salute. Horns up!!! 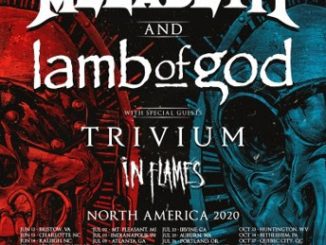 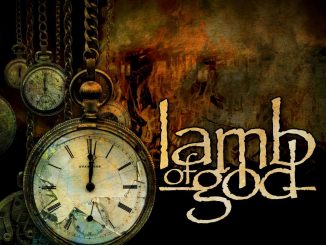 LAMB OF GOD Releases First New Music in Five Years, “Checkmate,” from Upcoming Self-Titled Album, Due Out May 8 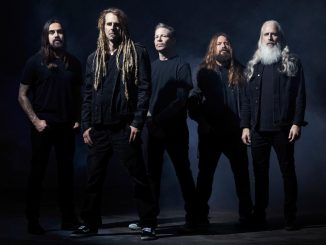