Wage War is a one of the most exciting metalcore bands I have seen in a long time. The first time I saw them was last year at the Chain Reaction in Anaheim on August 4th, which also happens to be the same day as their sophomore effort, Deadweight, was released. I remembered the intensity of their sound and the chaotic energy they brought with them. For about 85% of their performance, I was moshing and headbanging in the center of a very hot tiny venue. I had the opportunity to speak with Wage War’s two leaders, vocalist Briton “Brit” Bond and rhythm guitarist Cody Quistad, at the Loudwire Music Awards last October for a couple of minutes. Wage War is now touring on the Vans Warped Tour circuit, and they both agreed to do a longer interview. I was a little winded that day because the amount of interviews I had, but I was excited to see them again.

Believe it or not, one of the band mate’s mothers came up with the name Wage War after they had to change it a few times. Brit and Cody have known each other for a long time through music and church, and when Cody’s first group did not pan out, he gave Brit a call and they have been together ever since. They originated from the Sunshine State in Florida, where the metal is pretty big down there according to them. I ask Brit how he became an unclean vocalist or a screamer, for which he told me that he went into his room listening to his favorite singers like Randy Blythe of Lamb of God and just practiced it. We would discuss their new album and what approaches they took to making it different from their debut, Blueprints. Deadweight features the power ballad, “Gravity,” and the reason they went in that direction is because they wanted to try something and see where it would take them. The last track off the record is called “Johnny Cash,” and we talked about its origin.

This is their 2nd Warped Tour, the first being in 2016. It is a bittersweet moment for the guys, but they looked to put on a great show and create memories for the fans that will last a long time for them. After the Warped Tour wraps up, the band will head overseas for some shows and then have some down time with their families. Cody sometimes shares clean vocal duties with Brit, and I asked him how they divide up the lyrics when singing. He told me that he and Brit bounce ideas off each other and go with it.

It was so cool to see Brit and Cody again and have the chance to do a real interview with them.  Wage War is an outstanding metal group that is stellar, and packs a punch when the chords are picked. By the way, during the interview, Brit was sporting a black 12 gallon cowboy hat that he loves to wear. I complemented him for wear it and said it goes well with his nose ring, which he laughed. As mentioned before, Wage War will heading to Europe this fall before heading home to recharge. I wish them nothing but luck and success for them in the future. To Briton Bond and Cody Quistad, I salute you. Horns up!!! 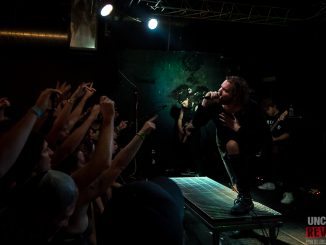 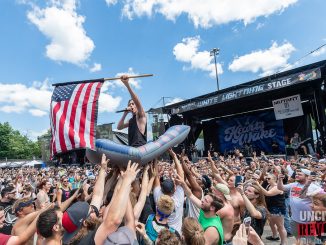 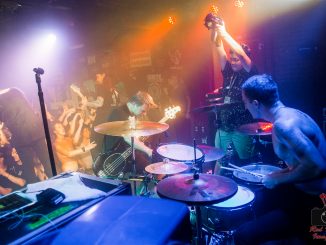