It is Labor Day Weekend, which means summer is practically over. It always seems like summer goes by way too quickly. My best friend, Rockaholic and I, were wondering how we could end our summer on a high note. Being that we are both huge Parkway Drive fans, we decided to head down to the House of Blues of Las Vegas at the Mandalay Bay Hotel & Casino. The international metalcore megastars have recently dropped their 6th studio album, Reverence, and it has been dominating the charts. Polaris, The Devil Wears Prada, and August Burns Red tagged along on this tour. I have not seen any of these bands live yet, so it was exciting to catch them for the first time.

Polaris is one of Australia’s newest metalcore groups looking to join the high ranks of heavy metal greatness as their brethren, Parkway Drive. Last year, they put out their debut album, The Mortal Coil, to rave reviews. This tour marks their first appearance here in the U.S., and they left their mark with the Vegas crowd. Vocalist Jamie Hails has a powerful scream that is full of adrenaline. While Hails brings the blistering roars, bassist Jake Steinhauser gave us a melodic style singing. There were some outrageous hooks and riffs provided by the guitarists Ryan Siew and Rick Schneider, and drummer Daniel Furnari brought the thunder. From “Lucid” to “Regress,” “Consume,” and “The Slow Decay,” Polaris have become the newest flag bearers of the metalcore army. If Vegas loved them, so will the reset of the U.S.

The Devil Wears Prada is an interesting beast that I am not too sure about. The Christian soldiers of the metalcore scene were brash and aggressive as soon as they started playing “Mammoth.” Frontman Mike Hranica was a wild man, hollering and running around on stage with such Biblical hostility. He was hard to shoot at times, but entertaining to watch. Kyle Sipress is their newest lead guitarist, and he has earned his spot with his contagious lead hooks. Giuseppe Capolupo is touring with Devil Wears Prada as their drummer, and he is looking to become a permanent member. I felt he earned his stripes with his wailing. There were times where I thought their synergy was a little unbalanced, but they still managed to preach their messages with songs like “Planet A,” “Worldwide,” “Born to Lose,” “I Hate Buffering,” and “Danger: Wildman.” I feel they will find their groove as the tour progresses. Like fiery Baptist priests, The Devil Wears Prada spread the word with heaviness and passion.

I wanted to see August Burns Red ever since I got their 2nd album, Messengers. After seeing them live, they were everything I thought they were and more. They electrified me with their technical breakdowns and melodic riffs. Jake Luhrs was a blaring pleasure to watch on the microphone. The fans, including me, went crazy as soon as he sang the first lyrics to “Kings of Sorrow.” August Burns Red has been a roll lately with the release of their 8th album, 2017’s Phantom Anthem, which secured them their 2nd Grammy nomination. From “Composure” to “Fault Line,” intense guitar work was in motion provided by lead JB Brubaker and rhythm man Brent Rambler. The beats of the songs were in a blazing rage thanks to the dominant efforts of drummer Matt Greiner and bassist Dustin Davidson. They had the fans banging their heads with their other array of hits like “Martyr,” “Invisible Enemy,” “Empire,” “Majoring in the Minors,” and “White Washed.”  Vegas fans asked the Lord to bring to them a righteous metal band, so He gave the crowd August Burns Red.

In between the sets, the House of Blues likes to play music over the PA system to keep the fans entertained. Feeling a little buzz going through my system, I decided to stand on the photo pit rafters and pump up the crowd for photo opportunities. From Eminem’s “Lose Yourself” to Bon Jovi’s “Livin’ On a Prayer” and System of a Down’s “Chop Suey,” we were feeling the power of music. I have never done anything like that before, but it felt invigorating.

The room goes dark, white lights shine on the stage, and then Parkway Drive go into overdrive with “Wishing Wells.” Coming out in earsplitting fashion, frontman Winston McCall roared with all his might. Viciously screaming like a lion, McCall is arguably one of the best modern metal vocalists I have ever seen. I know I say that about a lot of other artists, but it is true in his case. Jeff Ling played some earth-shattering solos that caused massive mosh pits, while rhythm axe man Luke “Pig” Kilpatrick gave us bodacious breakdown riffs. Bassist Jia “Pie” O’Connor and drummer Ben “Gaz” Gordon had tenacious energy with their heavy blasts and beat downs on their instruments. Once Parkway Drive came out, the House of Blues turned into a madhouse with fans entering the “circles of death” and crowd surfacing. I photographed a couple of fans exiting the photo pits after crowd surfing, with one fan striking a pose as he walked by. From “Vice Grip” to “The Void,” “Prey,” “Boneyards,” “Absolute Power,” “Karma,” “Idols and Anchors,” and “Wild Eyes,” Parkway Drive gave us mayhem fun. They finished their set with a 2 song encore that included my all time favorite, “Bottom Feeder.”

This was my second time covering the Vegas area, but my first covering a show at a casino on the Strip. Parkway Drive conquered the Vegas scene; I mean they enthralled the crowd with their insane metal riffs. August Burns Red brought the heavy rapture to the masses, The Devil Wears Prada was a hit and miss but was still entertaining to see, and Polaris won over the U.S. crowds. Las Vegas is a great stomping ground for heavy metal bands. Great place to spend Labor Day weekend at. To Parkway Drive, August Burns Red, The Devil Wears Prada, and Polaris, I salute you. Horns up!!! 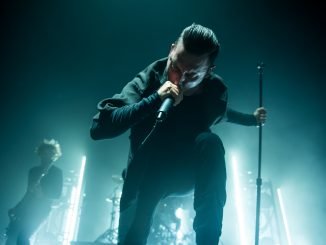 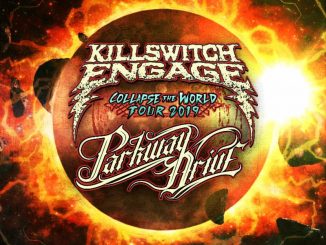