Two hours south, I descended to the location of Dimebag Darrell’s tragic final performance in Columbus, Ohio at the Alrosa Villa. It’s my first time stepping foot inside the venue, and as I stood there stage side, I felt a surreal void inside where it all happened.

The “Pitch Black Horror Over North America Tour” included Goatmill, Wolfheart, Mors Principium Est, and Carach Angren. Plentiful death metal screams filled to the brim at the Alrosa Villa. There were one reason and one reason only why I instantly sprang on this show. It was to see Mors Principium Est, but Carach Angren equally was up there of bands to cover. I didn’t care I miss work or had to push the snooze button on my alarm the next day. This shit was going to happen!

Local openers, Goatmill opened the night with their dirty, apocalyptical stage visuals accompanied with heavy doom death vocals. It’s not too often where a local opener’s sound can compete with the rest of the touring bands, but these guys seriously impressed the hell outta me. Great guitar melodies carried a solid emotional tone to feed the belly of the beast with Drake Tulloh on vocals.

Coming off a well-received new album entitled, “Constellation of the Black Light,” Wolfheart official kicked off their very first U.S. tour date in Columbus. I started listening to the melodic death metal band shortly after their announcement on this tour. The burly, tattooed guitarist (who dons a chain strap) and vocalist, Tuomas Saukkonen, may have an intimidating demeanor when you first notice him but comes across as genuine and forthcoming as he greeted the crowd with enthusiasm. Wolfheart is an auditory wonder with beautiful and dark harmonious tones that any metalhead would surely have as their soundtrack riding into battle.

Oh yes, Mors Principium Est (Latin for “death is the beginning”), the pivotal moment I’ve been anticipating. I wasn’t sure they ever do a U.S. stop, let alone an Ohio destination, but a GoFundMe was set up and they raised enough cash to accommodate travel expenses for their first-ever U.S. show. Mors Principium Est, in my opinion, has one of the best guitar work of any working metal band today. The technical writing of lead guitarist, Andy Gillion, knows how to orchestrate a song to capture the raw feeling paired with Ville Viljanen’s deathly vocals. Their latest 2016 album, “Embers of a Dying World” are chalked full of what I’m describing and a front-to-back flawless play through. If you’re a fan of Lamb of God, these guys will suit nicely in your collection. The performance was exceptional despite Ville suffering an upset stomach that night from eating some bad fish & chips earlier that day. During mid-song, I remember seeing him leave the stage momentarily only to return to pick up vocals after Andy’s guitar solo.

The stage is now cleared. An eerie backdrop now hangs pictured with a desolated town with “Carach Angren” printed across the stage. Red stage lights just dimly illuminate presenting a drum kit visible as if someone dug it up from an 18th-century cemetery and decided the gates surrounding graveyard would pair nicely around the kit. Soft cryptic background music fills the venue which at this point makes me feel like a sacrifice might take place soon. The church bell rings and the band finally reveals their nightly form. The symphonic black metal band, Carach Angren arguably could be the most theatrical band I have covered. Frontman Dennis “Seregor” Droomers dramatically acts out every song on stage, pulling you into the hellish nightmare story. There’s no shy side to Seregor as he greeted my camera numerous times through the set. Carach Angren has a different side compared to other black metal bands. The vocal work is a bit cleaner which compliments nicely to hear the cryptic stories of each song. The keyboards, piano, orchestrations of Clemens “Ardek” Wijers adds a brilliant cinematic Broadway touch. Anyone who’s interested in black metal, horror, chilling discoveries, or wants to be damn right entertained, Carach Angren delivers on those. 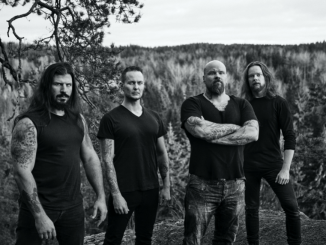 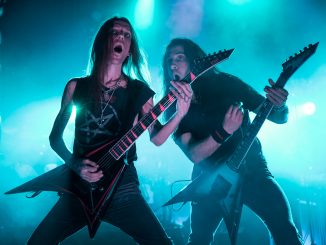 Children of Bodom Invades the Observatory With Finnish Winter Metal