It has been a while since I went to the Shrine Auditorium. First time I was there, Matt and I were covering Of Mice & Men and Rise Against back in July 2017. Well, I was returning to the USC campus on November 9th to check out my boys in Underøath bring the metal rapture to the Los Angeles masses. Underøath has been having quite a year, from putting out their new critically acclaimed album, Erase Me, to being one of the main performers at this year’s Las Rageous. Erase Me, which was released through Fearless Records, marks their first album of new material since 2010. They have been much stronger since drummer and clean vocalist Aaron Gillespie reunited with his brothers. They have now embarked on their Erase Me Tour with progressive post-hardcore rockers Dance Gavin Dance. Crown the Empire and The Plot in You was along for the ride, but I did not see them due to traffic.

Dance Gavin Dance has a very interesting sound. Before seeing them at the Shrine, I had no idea what they were about. Their music is a mixture of math rock, post-hardcore, experimental, funk, and progressive rock to name a few. They just released their 8th album, Artificial Selection, through Rise Records. While Jon Mess screamed his lungs out to the fans, Tilian Pearson would come right in and croon them with his clean vocals. They actually make an effective pair on stage. Lead guitarist Will Swan does a fine job laying down some crunchy lead riffs that have a distinctive blend of hardcore and jazz fusion. The songs ranged all over the genre map, giving the fans a little bit of everything. The crowd really enjoyed hearing the experimentation Dance Gavin Dance was cooking up with songs like “Son of Robot,” “Suspended in This Disaster,” “Chucky vs. The Giant Tortoise,” “Summertime Gladness,” “We Own the Night,” and “Inspire the Liars.” I would not say I liked or hated them, but I do respect how Dance Gavin Dance got the crowd off and showed off their talent for going into the weird. On a side note, they were just announced as one of the headliners for the first Swanfest concert event on March 30th at the National Grove in Anaheim.

After about 30 minutes of waiting, the auditorium goes pitch black and 2 screen monitors light up some special effects. Gillespie and keyboardist/programmer Christopher Dudley started to wail just as the other Underøath soldiers marched onto the stage to start things off with “On My Teeth.” Lead vocalist Spencer Chamberlain, looking good and limber ever since he got sober, belted out intense screaming. His piercing vocals were full of clout and sorrow. The guitar licks from both lead Timothy McTague and rhythm player James Smith was ferocious and intense. Bassist Grant Brandell brought the boom with his beats and hooks. Gillespie showed sheer tenacity when he played the drums.

Underøath not only played 6 songs off of Erase Me, but a majority of their songs came from their 2 critical darlings, 2004’s They’re Only Chasing Safety and 2008’s Lost in the Sound of Separation. Hearing all of their classic tunes was an awesome sight to see. I enjoyed hearing them at Las Rageous, but I felt like this was their best performance yet. Even Chamberlain took a minute to tell the fans that this show was by far his favorite. From “Young and Aspiring” to “Rapture,” “Illuminator,” “Desperate Times, Desperate Measures,” “Ihateit,” “Reinventing Your Exit,” “A Fault Line, A Fault of Mine,” “Too Bright to See, Too Loud to Hear,” and “I Gave Up,” Underøath was a thunderous sight for sore eyes. Chamberlain told everyone about the demons he struggled with and how it inspired him to write “I Gave Up,” a testament to fight on. After some pleading from the fans, Chamberlain and Gillespie came back out to perform an acoustic version of Nirvana’s “Heart-Shaped Box.” Then Gillespie left the stage so Chamberlain can have his moment. Right when he finished up the 3rd verse, Underøath came right in with a boom, ending the song on a hard rock note. They finished off the fans with the crowd favorite, “Writing on the Walls.”

Watching Underøath perform with amazing liveliness was great to see. The fans loved the concert so much, that I helped get them pumped and shot them with Matt’s pretty little camera. It is usually nice being the unofficial hype man, depending on the show. Dance Gavin Dance was an interesting group, one that I believe will more interesting down the road. All in all, it was a good night to be at the Shrine Auditorium. To Underøath and Dance Gavin Dance, I salute you. Horns up!!! 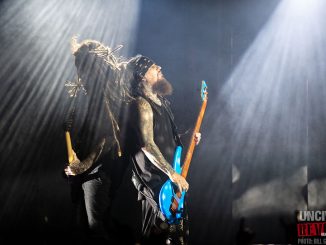 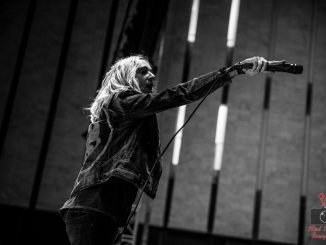 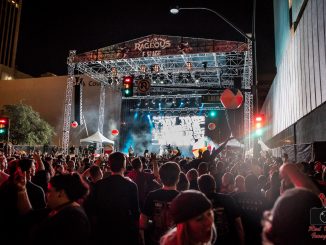