Well Uncivil Revolt readers, it is officially a brand new year. That always creates a fresh new start, new bands, old bands reforming, and new records to be dropped. So, after witnessing the excitement of Ozzfest on New Year’s Eve, Matt and I headed back out to one of our favorite spots in Hollywood, the Sunset Strip. We heard our boys from Las Vegas, alternative hard rockers Adelitas Way, was heading to the famous Roxy Theatre just before traveling to the United Kingdom this February. It has been almost a year since I saw them rock the main stage at Las Rageous, so I was excited to see them again and do a full set. Opening up for them was Hollywood’s own Bonesteel, who’s set we only caught the last 2 songs. They were very energetic, and I was really feeling them.

After Bonesteel wrapped up their set, Adelitas Way headed to the stage and kicked things off with “Still Hungry.” After rocking out to the opening number, I was still hungry for some more of Adelitas Way’s alternative rock swagger. Frontman Rick DeJesus gave it his all, electrifying the Roxy crowd with his powerful voice. The group has recently employed a new guitarist in Tavis Stanley, who was amazing. He really sizzled when he hit the notes and nailed the solos with style. If anything, he is the missing link Adelitas Way has been looking for. Drummer Trevor “Tre” Stafford and bassist Andrew Cushing kept the music steady and heavy at the same time with excellence. All through the evening, Adelitas Way rocked their way into the crowd’s souls and won them over with their alternative hard rock style. From “Ready for War” to “Bad Reputation,” “Notorious,” “Vibes,” “Drifting,” “Alive,” “Sick,” “Rage,” and the ever popular “Invincible,” it was a very entertaining performance. While the Roxy was not exactly packed, enough people came to show their love for the Las Vegas natives, especially Glenn Danzig, who was incognito.

Adelitas Way brought the exhilaration and talent to the Sunset Strip that night. Just like Las Rageous, they came, they saw, and they kicked ass. Speaking of Las Rageous, while I was attending the festival, I had the opportunity to interview DeJesus unexpectedly. We would talk about the group, where they are going, and what he hopes the next album will sound like. He was a righteous dude. To Adelitas Way, I salute you. Horns up!!! 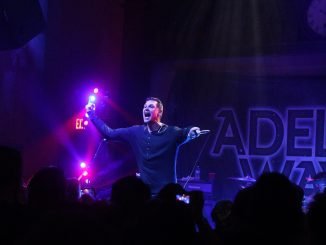 Adelitas Way and From Zero 2 Hero at the Parish Room