Ace Frehley latest album Spaceman came out on the 40th anniversary of his 1978 solo album, and he is back on track for sure. This record has an Old school feel with a nice mixture of modern digital as well. Production wise it’s great. The album cover itself is so cool, and only Ace Frehley could look cool in that bell bottomed space suit thing he’s wearing.

The first tune Without You I’m Nothing, cowrittwn with his old pal Gene Simmons making a guest appearance on this track as well. A great funky almost groovy bass line builds up to an awesome anthem. It’s got a fantastic hook, fantastic riffs, and it’s honest. It’s Aces thank you to both music and his fans. But yet it’s a great fucking song that isn’t corny. The solo gives me chills. It’s an awesome introduction to the album, it hits you like a kick to the guts.

Rockin With The Boys is a tune just asking your ol lady to chill, he’s just rockin with his band. Its a great song, and its just also so full of attitude. Ace truly is a fantastic songwriter, and his guitar playing is obviously never questioned, and his influence on many people is undeniable. His voice is strong and has aged like fine wine. Your Wish Is My Command is another Co write with Gene and he appears on it as well. It’s a spacey floaty like jammin rock tune with an element of stoner vibes in a way. Reminiscent of the Stones and Steve Miller band.

Bronx Boy is an ass kicking rock n roll song with an old school ace riff and many of his classic guitar fills with a song about his upbringing in the Bronx, so full of attitude. This song kicks serious ass. The solo is orgasmic. Damn Ace, you still got it my man.

Pursuit of Rock N Roll is about how anybody in bands, any music lovers, and all of us from journalists to promoters. We want nothing but our life, liberty, and the pursuit of rock n roll. It’s got a great riff and groove, giving a shout out to classic bands that influenced Ace and most of us directly or indirectly. Haters can hate, but this record is way better than anything kiss has done since 1987.

His cover of Eddie Money’s I Wanna Go Back is as he says in interviews ‘Aceafied it’, it’s a great ballad that isn’t a weep ballad, but it can’t help but bring up child memories and you get choked up for a second but it’s a celebration and just done so well. It’s sublime. And it still rocks.

Mission To Mars is the most ass kicking badass spacey song on the album. The omega baby. Holy shit. It’s this records Rocket Ride. Almost goes into punk territory it’s so brash. It’s a real banger. With a intergalactic solo that melts your face immediately. Woo, I need a cigarette after that one.

Get Off My Back is another great jam about someone being overly attached or annoyingly stalkerish. We’ve all been there. It’s got a great hook, it’s a chilled out tune. This album flows beautifully.

The Final track, the instrumental Quantum Flux is a great rockin spacey instrumental that just feels like your jamming flying through space what can I say? This entire album is fantastic. A great rock n roll record. We love ya Ace. 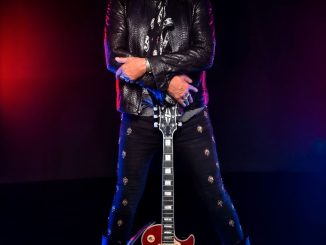 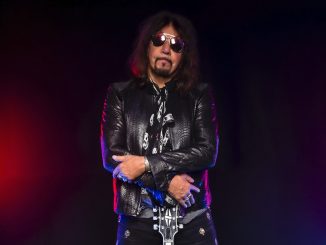 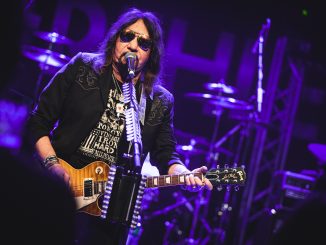