As far as industrial metal concerns me, it is one of those subgenres of rock that really has not made an impact on my life. Armed with distorted vocals, sampling, and repeated metal riffs, I cannot deny that industrial metal made a huge dent in people’s psyche during the 1990s. When I think of bands that fall into that category, they include Marilyn Manson, Rammstein, Godflesh, and the uber-famous Nine Inch Nails. There is one group that helped start the movement, and are considered the Godfathers of Industrial Metal, Ministry. The brainchild of frontman Al Jourgensen has been a major staple in the industrial metal community with their aggressive riffs and political-inspired lyrics. They have made headlines in 2018 with the release of their 14th album, AmeriKKKant, which took aim at racism and displeasure for our President Donald Trump. They headed back out on a 2nd leg of their current tour, and have brought French synthwave artist Carpenter Brut and New Zealand thrasher Alien Weaponry. It was getting closer to Christmas, so for this show, it was a time for headbanging.

Alien Weaponry have been making a huge splash in the heavy metal world lately. They have just released their debut album on Napalm Records, Tū, and it has been a hit with the fans and critics, including me. They kicked off their set with “PC Bro,” and they ravaged that song. Frontman/guitarist Lewis de Jong is a savage on the mic with his screams, and he wails on guitar like a bat out of hell. Lewis’ brother, drummer Henry, was viciously bombastic on the kit, and bassist Ethan Trembath was thunderous with his bass chops. What makes Alien Weaponry unique is writing songs in their native Māori language, te reo Māori. One does not hear that every day, but the crowd has been embracing it as part of their set. From “Holding My Breath” to “Kai tangata,” “Whispers,” and “Rū Ana te Whenua,” Alien Weaponry killed their performance with their combination of groove metal and thrash metal. Already a favorite of Jose Mangin’s, I will be watching Alien Weaponry with great anticipation.

Up next was an odd choice for a metal show, adding a synthwave artist in Carpenter Brut. I went into his set with an open mind, not knowing what to expect. Carpenter Brut spooked me with a loud, unexpected bang at the start of “Leather Teeth.” Rounding off his group included members from the French metal band Hacride, guitarist Adrien Grousset and drummer Florent Marcadet. Both of these musicians helped Carpenter add elements of metal and rock into his electronic sound. I particularly enjoyed Grousset’s riffs. In the background on a giant projector screen, there were images from obscene horror films, and I believe that adds a sense of horror to their sound. Other songs that were performed included “Roller Mobster,” “Beware the Beast,” “Cheerleader Effect,” “Monday Hunt,” “Inferno Galore,” “SexKiller on the Loose,” “5 118 574,” and “Le Perv.” Synthwave is not my forte, but Carpenter Brut did put on an amazing performance, and I am sure the crowd was in awe by what they heard.

With a pulpit put on stage, Ministry came out to take a shot at the political machine that unlawfully runs our lives, starting with “Twilight Zone.” Covered in numerous piercings, sporting John Lennon-like sunglasses, and donning his trademark dreadlocks, Jourgensen preached his words on social injustice and how much he hates our commander in chief. He has no fear when it comes to voicing his opinion with his thrash metal voice. He is the heart and soul of Ministry, even though he is the only original member left. There were some awesome driving riffs by the guitar duo of Sin Quirin and Cesar Soto, who wore a Guy Fawkes mask for the first 2 songs. It was my first time watching the powerful force that is bassist Tony Campos, and he looked awesome with his beard. Drummer Derek Abrams and keyboardist John Bechdel did a stellar job with their parts. Collectively, Ministry came together perfectly.

During their performance, they divided their set list into 2 halves. For the first half their show, Ministry played stuff from AmeriKKKant, voicing their stance on the current political climate. From “Victims of a Clown” to “We’re Tired of It,” “Wargasm,” “Antifa,” “Game Over,” and “AmeriKKKa,” it was an array of songs that each took a shot at President Trump. Personally, I support our President and was not impressed by their constant bashing of him, which is a major turnoff. However, I give credit to Jourgensen and his firm stance on sticking to his guns, and not giving a fuck what the right wing thinks. That is what living in this country is all about, agreeing to disagree and have some respect for different beliefs. For the 2nd half, they went into their classic hits that the fans of the night enjoyed hearing. Some of their classic songs included “The Land of Rape and Honey,” “The Missing,” “Deity,” “Stigmata,” “Just One Fix,” “N.W.O.,” “Thieves,” and “So What,” which featured a surprise appearance by industrial metal artist Chris Connelly. I have to admit, Ministry really knows how to write hit songs, some of which I was enjoying very much. After a quick breather, they came out to perform an acoustic performance of “(Everyday Is) Halloween,” a song they have not played live since 1986. Joining them was Jane’s Addiction axe man Dave Navarro.

It was my first at the Fonda Theatre, and I could not have picked a better show to cover. Ministry are still showing fans why when it comes to industrial metal, they are still the undisputed champions of it. Carpenter Brut put on a good performance, even though it was synthwave. This does not make me a fan of it, but I will watch for him and see what he comes up with next. Alien Weaponry thrashed their way into our souls, and they can give their Australian neighbors Parkway Drive a run for their money. Not a bad show to be at. To Ministry, Carpenter Brut, and Alien Weaponry, I salute you. Horns up!!! 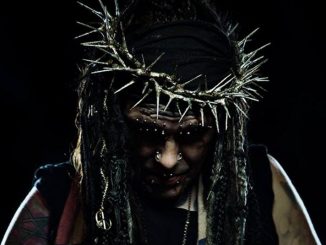 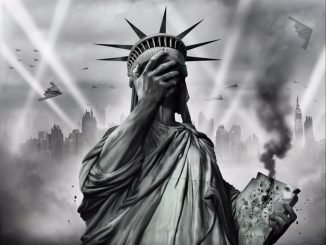 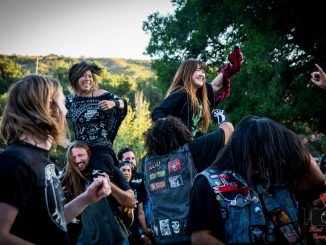