2018 was riddled with so many great concerts, festivals, and albums. The New Year was just around the corner, and I was determined to go out this time around. On New Year’s Eve in 2017, I did not do much except watch the countdown on TV. Talk about a boring night in when I should be at some party, celebrating the beginning of a new year. When I heard that Ozzy Osbourne had decided to perform on New Year’s Eve at the Forum, I knew I had to be there. What better way to celebrate the New Year than to ring it in with the Prince of Darkness. However, Ozzy did not want it to be a simple show, he wanted to bring Ozzfest to us. Featuring Rob Zombie, Marilyn Manson, Jonathan Davis, Body Count and more, the countdown begins at the Forum, heavy metal style. The first 3 opening acts took to the parking lot of the Forum, looking to rev our engines.

Kick things off in the street was horror metal act Wednesday 13. This will have been the second time in about a month that seen the showman who makes mayhem look pleasurable. Armed with songs like “Too Fast for Blood,” “Serpent Society,” “Prey for Me,” and “Keep Watching the Skies,” the frontman who was known for his days in the Murderdolls and Frankenstein Drag Queens From Planet 13 brought gore and terror to the Ozzfest crowd. During their performance, Wednesday 13 brought out a snow blower and started dowsing the fans with artificial snow to make it look like a wicked wonderland. With Roman Surman leading the riff charge on lead guitar, they went into 3 Frankenstein Drag Queens songs that the crowd went nuts for, including “Your Mother Sucks Cock in Hell,” “Die My Bride,” and “I Love to Say Fuck.” That is the best way to get Ozzfest rolling.

Up next was the outlaws of the heavy metal scene, DevilDriver. I tell you, I never get tired of seeing Dez Fafara and his band of hellish goons. They came to Ozzfest for one purpose, to stir the crowd into metal chaos. DevilDriver was pumping the fans full of adrenaline as mosh pits started to form in the middle of the street. Ever since the release of their country covers LP, Outlaws ‘til the End: Vol. 1, the groove/thrash metal bandits have been on a major tear through the U.S. From “Ruthless” to “Hold Back the Day,” “Grinfucked,” “My Night Sky,” the AWOLNATION cover “Sail,” “I Could Care Less,” “Clouds Over California,” and “End of the Line,” DevilDriver was filled with chaotic energy and put on a killer performance. The guitar duo of Mike Spreitzer and Neal Tiemann sizzled with their back-to-back riffs and hard-hitting solos. DevilDriver should have been on the main stage, but they did their job and continue to dominate the metal scene after many years on the road. On a side note, they plan to release a double concept album later this year, so be on the lookout for it.

Guitar legend Zakk Wykde came out to the side stage in his golf cart, guitar in hand. He decided to serenade the fans with some of his favorite Black Sabbath tunes with his Sabbath cover group, Zakk Sabbath. Zakk handled the guitar and vocal works, while being backed by Ozzy’s bassist Rob “Blasko” Nicholson and Queens of the Stone Age drummer Joey Castillo. What was cool about Zakk Sabbath is that they did not play the popular hits, but the other Sabbath songs that still give a kick in the guts to fans. Zakk is one of the few guitar Gods still around, and he showed us why with the tenacity and viciousness, plus he sounds really good. Some of the Sabbath songs fans got to hear included “Supernaut,” “Snowblind,” “Children of the Grave,” “Lord of This World,” “Under the Sun/Every Day Comes and Goes,” “Tomorrow’s Dream,” and “Into the Void.” During “Snowblind,” Zakk performed his solo while in the crowd. The man sure loves to give a show. He ended his set with the classic Black Sabbath tune, “N.I.B.” As the last group in the parking lot, we all headed inside the Forum.

The first group to hit the main stage was the rap metal legends, Body Count. Started by aggressive rapper Ice-T (Law & Order: SVU), Body Count have been receiving a lot of critical acclaim since their reformation in 2009. I have been wanting to check these guys out ever since I saw them briefly at the 2017 Loudwire Music Awards. Full of liberal angst and pure metal aggression, Body Count dominated their set. Ice-T comes out in an orange prison jumpsuit, and starts it off with “Body Count’s in the House.” He is just as menacing on stage as he is on TV. Ernie C is a blistering pleasure to watch as he nails the guitar solos and riffs. Along with sampler Sean E Sean, bassist Vincent Price, drummer Ill Will, rhythm guitarist Juan of the Dead, and hype man Little Ice, Body Count got up in our face. Ever since their 2014 release Manslaughter and 2017’s Bloodlust, this group has been on the warpath. From “Bowels of the Devil” to “Manslaughter,” “No Lives Matter,” “There Goes the Neighborhood,” “Talk Shit, Get Shot,” and “This Is Why We Ride,” Body Count seized the day, where they also did a stellar cover of Slayer’s “Raining Blood / Postmortem.” They even played their most popular and controversial song, “Cop Killer.” You fans better duck because Body Count is coming.

Jonathan “JD” Davis was next give us his taste of symphonic dark metal. This year, he released his solo debut, Black Labyrinth, to unanimous acclaim. His solo stuff is very eclectic but still very heavy. JD’s voice is very chilling but calm at the same time, as if he is leading you down the rabbit hole, and one does not care what is on the other side. The stage is surrounded by a sea of red light, giving the performance a more haunted aura. I did not catch name of his players in the group, but his Korn brother Ray Luzier wailed on the drums with heavy harmoniousness. All material sung by JD were his own stuff like “Underneath My Skin,” “Forsaken,” “Final Days,” “What You Believe,” “Basic Needs,” “Walk on By,” “What It Is,” and “Happiness.” Recently, he went through tragedy in his life with the sudden passing of his wife, Deven. Whatever pain is going through, he channeled it into blissful positivity. Though I cannot wait for the next Korn album to come out, I am curious to see how far JD can take his solo act.

Next up was the Anti-Christ Superstar himself, Marilyn Manson. He is all healed up from his freak accident with a stage prop that dropped on him, resulting in a both legs broken. Brandishing a microphone in the shape of a knife, Manson fiercely jabbed at the fans’ eardrums, preaching his sinister message. He showed no mercy to his loyal congregation when he went into his collection of eerie hits “Angel With the Scabbed Wings,” “Rock is Dead,” “This Is the New Shit,” “The Dope Show,” “The Beautiful People,” “Antichrist Superstar,” and the Eurythmics cover “Sweet Dreams (Are Made of This).” Before he went into “Antichrist Superstar” and “Sweet Dreams,” there was a 5-10 minute set/costume change to go with the theme of those two tunes. Unfortunately, we cannot provide any pictures because Manson cut the photo passes for his one song at the last minute. That was totally unprofessional on his part, and Matt and I were pissed at his continued disrespect to rock journalists. Personally, the Anti-Christ Superstar needs to take the throne crown out of his ass because he is becoming a giant prick. Good performance though by an artist with a diva inflated ego.

After witnessing Manson’s sermon, the horror circus comes back to Ozzfest, with Rob Zombie once again as its ringmaster. Kicking off their set with “Dead City Radio and the New Gods of Supertown,” Zombie and his guitar wizard pal John 5 mesmerized the fans of Hollywood with their electric-filled performance. No matter how old Zombie gets, he still jumps around on stage as if he were still in his 20s. They played an array of classic horror metal hits including stuff from his White Zombie days like “Superbeast,” “Well, Everybody’s Fucking in a U.F.O.,” “More Human Than Human,” “Never Gonna Stop (The Red, Red Kroovy),” “House of a 1000 Corpses,” and “Thunder Kiss ’65.” After “House of 1000 Corpses,” John 5 went into this insane impromptu solo that included snippets of classic rock riffs. He is a freakin’ surgeon on this instrument, performing flawlessly. As a surprise to the fans, Manson and Mötley Crüe bassist Nikki Sixx came out to perform the Beatles’ iconic “Helter Skelter.” After showing the trailer to his new upcoming horror flick 3 From Hell, Zombie returned to give a devilish performance of “Dragula.” Ever the grand marshal, Zombie is always a fun act to witness.

All aboard!!! For the Blizzard of Ozz himself, Ozzy Osbourne, stepped out of the shadows and led us into the light that is heavy metal heaven. He started things off 2 of his classic hits that all love hearing, “Bark at the Moon” and “Mr. Crowley.” The Prince of Darkness has recently turned 70 years old, and he shows no signs of slowing down, despite it being his final tour. Guitar God Zakk Wylde was back it after giving a star-studded performance with Zakk Sabbath. Both he and Ozzy make a very effective duo, conquering the set with classic songs like “Suicide Silence,” Black Sabbath’s “Fairies Wear Boots,” “I Don’t Know,” “No More Tears,” “I Don’t Want to Change the World,” and “Shot in the Dark.” After performing “Fairies Wear Boots,” Ozzy stops the show with 2 minutes left in 2018. Waiting for the clock to strike midnight, Ozzy gave us the countdown, and we will yelled “HAPPY NEW YEAR!” Fireworks and cheerful songs played throughout the arena.

Ozzy’s band, which also consists of Blasko on bass, Adam Wakeman on keyboards/rhythm guitar, and longtime drummer Tommy Clufetos, owned the night with their collective talents. During the Black Sabbath’s “War Pigs,” Zakk marches down from the stage and starts walking around the arena, stopping at different locations to give the fans a crazy-ass solo. Not even Eddie Van Halen would do that. Afterwards, the band goes into an instrumental melody, where Clufetos hammers down a bombastic drum solo. He does not get enough credit as a drummer because he is good. Just before the encore, Ozzy goes into one of the greatest metal songs of all time, “Crazy Train.” Every time the opening riff is played, we all go off the rails. After taking a breather, Ozzy and Zakk return to the stage to give us an intimate performance of “Mama, I’m Coming Home.” Then, the place erupts when Ozzy gives us Black Sabbath’s “Paranoid,” the perfect song to end the night.

This was the best way to ring in the New Year. Ozzy still has amazing stage allure about himself. I am so thankful that despite canceling the LA date of his tour due to illness, he gave us Ozzfest as a way of making it up to us. The acts he booked for the night lit up the night sky, and filled us with pumped-up adrenaline to headbang. 2018 has been very good to me, and cannot wait to see what 2019 has in store for us all. Happy New Year! To Ozzfest, I salute you. Horns up!!! 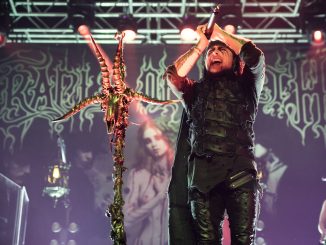 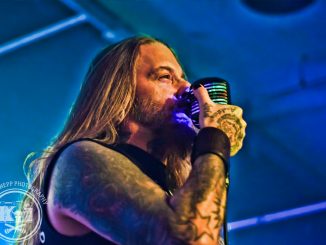