Back in 1999, a venue opened in Anaheim known as Tinseltown.  The given name did not stick so it was renamed The Sun Theatre and then revamped once more to what is now known as The Grove of Anaheim. When it originally opened as Tinseltown, one band had to be the inaugural act to open the venue.  Whom better than the legendary Chicago classic rock band, Styx. Over the last 20 years, Styx has come back through Anaheim and to The Grove specifically on eleven separate occasions.  On this night, they came for a two-hour solo show of classic hits and new songs from their latest album, The Mission for the fans. Joining me this late hour was a very special guest and the biggest Styx fan I know, my mother Lori. Now, my mother likes to claim that the song “Lorelei” was written about her. Lori has seen Styx countless amounts of times but tonight would be special as it was the closest seat she has ever had to the band.

Opening the night with a song off of The Mission, Styx hit the stage with “Gone Gone Gone,” ready to dance and wow the fans of Southern California. Even though the band has been around for 47 years, they have not lost a single step with their performance or talent on stage. One thing I have always loved about Styx is that they trade-off vocal duties between members and each one still sounds perfect as if you are listening to the album. Taking the vocal lead on songs like “Blue Collar Man (Long Nights)” and “Fooling Yourself (The Angry Young Man),” you can’t help but fall in love with Tommy Shaw and his baby blue eyes. Shaw even went into telling a story before the band performed “Crystal Ball”, about how the song had to be shortened due to the music industry standards back in the 70s. Yet, they brought the acoustic verse that had been previously cut back to the end of the song for tonight’s show.

The other main lead vocalist who has taking over the keyboard role from founding member Dennis DeYoung, was Lawrence Gowan. Singing lead on songs like “The Grand Illusion” and “Lady,” Gowan has so much personality behind the keyboard. One thing that helps with this is that the keyboard spins so Gowan can face any direction he desires while playing and singing. Another trait that makes a Styx song, a Styx song, is their huge harmonies where every member is on the mic with bassist Ricky Phillips and drummer Todd Sucherman singing as well. Ending the first half of their set and turning the Grove into Paradise City, Styx went into “Rockin’ the Paradise” as Gowan dawned a sequined blazer and fedora while dancing across the stage.  No audience member could stay seated.

Returning to the stage and to the James “JY” Young vocally lead song “Miss America,” the crowd was no where near ready to be done singing and rocking along to Styx. Not wanting to just stay and play the classics, Styx went into a four-song set where they played songs off The Mission. With songs like “Hundred Miles From Home,” “Red Storm,” and “The Outpost”, these songs fit perfectly into the Styx catalogue of music. They even brought out producer Will Evankovich to play rhythm guitar during this mini set. Shortly after, they brought back the classic songs with audience participation in, “Too Much Time On My Hands” which had everyone clapping and singing along to the chorus. Next, Gowan allowed the crowd to join in on a sing-a-long of sorts with a tribute to Elton John and Queen performing a keyboard solo of “Goodbye Yellow Brick Road” and “Bohemian Rhapsody.”  This was before leading into the iconic opening of one of Styx’s most beloved songs, “Come Sail Away.”

Coming back on stage for a two-song encore, we got to listen to a song that I personally have not heard Styx play in its entirety live. After a lengthy legal battle with original co-song writer DeYoung, things have finally been worked out and Styx can play “Mr. Roboto.” One of their most iconic and well-known songs, the boys of Styx still play this to perfection and with joy in their faces again. Finishing the night with the classic “Renegade,” the lights went dark as Shaw’s solemn voice could be the only thing heard along with the bass drum being hit to replicate a heartbeat. As the rest of Styx filled the harmonies, Shaw let out the cry that gets the song going and confetti canons shot over the first three tiers of the crowd. Though I would never consider Styx a head banging band, “Renegade” has the perfect beat, tempo, and style that you just can’t help but throw your head back and forth to as you rock out. This was the perfect way to end our two hours of Styx bliss.

Throughout the show, I could not help but to look over to my mom who was thoroughly enjoying herself.  To quote her, she introduced me to “all the good music” when I was growing up. I’ve been lucky enough to see Styx nearly ten times and almost every time has been with her. This is a band we both share so much of a connection to and I could not imagine seeing them with anyone else but her. This was also my first time seeing Styx without an appearance from founding member and original bassist Chuck Panozzo who was surely missed. No matter how many times I see Styx, I can never wait to see them again and go with Mom.

This article is dedicated to my Mom 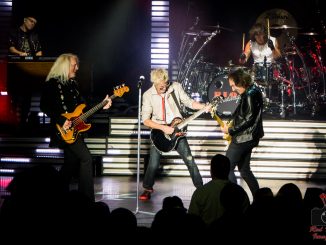 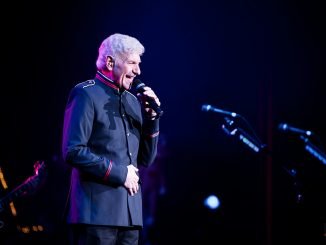