Every metal fan knows of the Big 4 in thrash metal: Megadeth, Anthrax, Slayer, and of course, Metallica. All 4 of these legendary acts have helped cement thrash metal’s legacy. However, there are a lot of other groups in this sub-genre that were as responsible for its success. One of those bands that also has a cult-like following is New Jersey’s own Overkill. One of the leading pioneers of thrash before Metallica or Megadeth formed, Overkill is known for their agility, heavy assertion, blistering riffs, and ear-shattering screams by founder/frontman Bobby Blitz. They have been in the game for almost 40 years, and they do not look like they are ready to hang up their guitars. Their last 4 albums (2010’s Ironbound, 2012’s The Electric Age, 2014’s White Devil Armory, and 2017’s The Grinding Wheel) have been met with critical acclaim, and they look to keep that streak going with The Wings of War. Blitz and his metal outlaw outfit are out to spread their wings further and do battle once again.

An alarm goes off in the beginning of the opening track, “Last Man Standing,” as if to warn us to duck and cover for Overkill has come to unleash chaos. Then, all of a sudden, Jason Bittner goes postal on the drum kit. Blitz is razor sharp with the vocals, while rhythm guitarist Derek “The Skull” Tailer gives us a blistering riff. “Believe in the Fight” has this bombastic opening drum solo that Bittner executes nicely. This is his first album with Overkill, taking over for Ron Lipnicki, who departed after 11 years in the group. I love the lyrically content on the tune, basically telling us to never give up without a fight. Things go a little slower with “Head Of a Pin,” but only a tad. Skull creates this infectious riff in the beginning that is like smoking a good cigar, slow burning to appreciate the flavor. I particularly enjoyed Blitz’s slowed tempo in his vocals, all the while still having an intense aggression. It also features this awesome Motörhead-inspired solo that lead guitarist Dave Linsk lays down perfectly. It matches the riffs that Skull is pumping out. Things get crazy again with “Bat Shit Crazy.” There is a cool break in the middle before Linsk hits us with another stellar solo. “Distortion” goes into power ballad territory at the start of the song, where bassist and founder D.D. Verni keeps a steady but effective bass beat. Skull and Linsk are super tight the whole song with their harmonious and heavy riffs. 5 songs down with 5 more to go.

It sounds like Verni goes a little rockabilly with his bass in “A Mother’s Prayer.” Like to Frank Bello, Robert Trujillo, and David Ellefson, D.D. is one of my absolute favorite thrash bassists. Bittner continues to slash down the album with his kick-ass grooves. Next, Overkill pays homage to their home state of New Jersey with “Welcome to the Garden State.” Blitz gets in your face about never fucking with a Jersey boy, as well as how it is the greatest place in the U.S. Talk about love for one’s hometown. The song also features a brief monologue from the hit HBO gangster drama, The Sopranos, which takes place in Jersey. Great song? Forget about it! “Where Few Dare to Walk” has this haunting aurora in its sound, thanks to Verni’s eerie bass licks during the verses. It has some tough lyrics, urging us to walk the walk and fight back against your adversary. After 20 years in the band, Linsk keeps coming up with brilliant white-hot solos, especially on this tune. “Out On the Road-Kill” is an adrenaline-driven song that should not be played while driving; might make us go into road rage. This song makes the listener grind his/her teeth and clinch their fist with madness. Linsk and Skull are bad motherfuckers with their axes. We come to the finish line with “Hole in My Soul.” They finished strong with a song about having a black soul. Sheer terror and agony surrounds Overkill, who bring the album to a crashing halt.

After almost 40 years, Overkill has not yet lost their touch. While I did not feel that it was not their strongest of their recent releases, The Wings of War is still of heavy metal adrenaline and excitement. Bittner fits in really well with Overkill, and they are lucky to have each other. Nuclear Blast Records continues their streak at creating metal exhilaration. They are about to hit the road with Death Angel and Acts of Defiance, and I do not believe we can prepare enough for their arrival. Stay off the road, for they are coming. To Overkill, I salute you. Horns up!!! 8.8/10 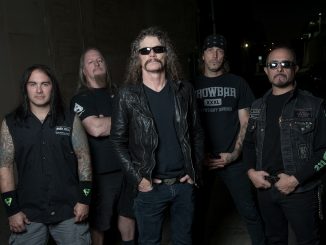