First walking up to this venue, it feels like you’re going to see some sort of theatrical show, but that is exactly what you got. Senses Fail, a post-hardcore/metalcore band that came to be in 2002 from New Jersey. They put on a show and kept the crowd involved the entire time they were on stage. Lead singer, James “Buddy” Nielsen, definitely shined while performing; wearing a jaguar printed cat suit, as well as giving us a Freddie Mercury vibe. Before the set started, I was able to talk to a fan of theirs and they told me, “they’ve been a fan for about 10 years.” Just goes to show how much a band can impact someone’s life. The group opened the show with a song from their Still Searching album, called “Can’t Be Saved.” Buddy was extremely energetic throughout the entire set, rolling around on the floor, and jumping everywhere. Within the crowd, there were a few mosh pits, and plenty of crowd surfers. People were without a doubt enjoying their time, while the band performed. In the middle of their set, hanging from the ceiling there was a disco ball which lit up the entire venue, from the balcony, down to the pit. However, when it came to the ending of their set, that’s where things took a very interesting, yet amazing turn. Their ending song started with a System Of The Down cover of “Chop Suey,” which transitioned into a melody of many other covers. It kept the crowd wanting more and it was a great way for Senses Fail to end their set. They will continue to go down as one of the greatest metalcore bands and I can’t wait to see what more they have in store for us.

The Amity Affliction will always prove that they own the stage with every performance they give. This Australian metalcore band gives their all to keep the fans involved, and it’s done successfully. Being a band that formed in 2003 they have a way to keep their music fresh but not straying from their own sound. Joel Birch, known for his unclean vocals, did an amazing job of making sure the crowd felt the music as much as he did. Just from watching him, you could tell how much this band means to him. Now, for Ahren Stringer, bassist and clean vocals, may I just say, he did a near perfect performance. His vocals were superb and he put his heart and soul into every word he sang. The Amity fans gave the show something special too. There was a technical issue a little after the beginning of their set, and without hesitation the fans filled the room with their voices. The band did a great job of letting the show go on, and I’m more than sure hearing their fans made it that much better. In the middle of their set they played one of their most well known songs, “Open Letter.” The crowd, including myself, sang at the top of their lungs, because what else are you suppose to do at a concert? Amity Affliction has proven to be one of the great live performances out there. From the loving fan base, to the messages they send out within their music, they will be around for years to come.

Full The Amity Affliction gallery below: 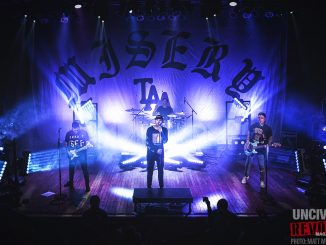