I have heard a lot of good and interesting things about the Pasadena venue called the Rose. Located in downtown Pasadena across the street from the Pasadena Convention center, it serves as both a concert venue and restaurant. It is somewhat similar to the Coach House in San Juan Capistrano, but more classy and easier to find. I have looked at their past concert events, and a lot of great acts have actually performed there, including KISS’ Ace Frehley. I learned that on January 19th, Anaheim hard rockers Buckcherry would be stopping by. I saw them once, briefly, back in 2009 when they opened up for KISS. I did not see the whole set, but I heard their live performances were stunning to watch. So, along with my Lady of Rock Melanie, we headed to the Rose for some rock ‘n’ roll fun.

After the opening bands did their thing, the lights go off, and out steps Buckcherry. Led by bad boy frontman Josh Todd, they kicked things into high gear with the Nine Inch Nails cover, “Head Like a Hole.” Todd has been Buckcherry’s leader for almost 25 years, and he still has that silky swagger that made him a hard rocker version of Mick Jagger. With his slippery dance moves and liberating voice, he wowed the fans all night. It is sad that lead guitarist/co-founder Keith Nelson left the group, but newcomer Kevin Roentgen filled his spot nicely, playing each solo with such ease. Rhythm player Stevie D and bassist Kelly LeMieux nailed the riffs and beats, while their newest drummer Francis Ruiz clashed on the kit nicely. Buckcherry dazzled the Pasadena crowd all their well-known hits, including “It’s a Party,” “Somebody Fucked with Me,” “Lit Up,” “Out of Line,” “Too Drunk…,” “Sorry,” “Gluttony,” and “Crazy Bitch.” They also included a couple of songs from their upcoming LP, Warpaint, which were the title track and “Bent.” After a quick breather, Buckcherry returned to hit the fans with a couple of more tunes that brought the house down.

It was a fun evening, and enjoyed Buckcherry’s performance. Even though Todd is the sole original member of the group, he can still recruited top-notch musicians who have the ability to kick ass. As for photographing the show, it was difficult because there was no pit, so I had to maneuver in front of the crowd in different spots to get good shots. Unfortunately, one drunken fan got in my face and complained about me being in his way and the fact I got in for free. There is always that one unruly shithead who has to ruin the experience, but that’s rock ‘n’ roll for you. The boys of Anaheim owned Pasadena. To Buckcherry, I salute you. Horns up!!! 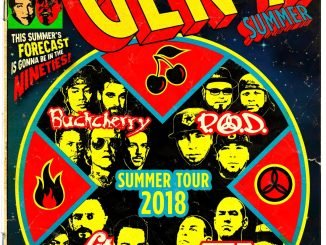