Los Angeles-based rock band THE DOSE have announced a March 15th release for their much-anticipated debut album, SALINE, which was produced by Keith Nelson (Buckcherry) and mixed by Joe Barresi (Queens of the Stone Age, Tool).

The Dose, comprised of Indio Downey on vocals/guitar and Ralph Alexander on drums, have been previewing the album for the past several months, premiering videos for multiple tracks, including “Saline” (Consequence of Sound), “Drown” (Billboard), “Vervain” (Guitar World), “Tart” (Kerrang) and “Thrill Of It” (Alternative Press).

Loudwire called their music “infectious” and LA Weekly compared their sound to Soundgarden and Alice In Chains and wrote, “the sheer level of noise and density of the hard-rock tunes onSaline is frankly shocking…it’s a beast of a record.”

The full track listing is:

The duo have been touring endlessly in support, sharing international stages with Good Charlotte and playing festivals alongside the likes of Nine Inch Nails, System Of A Down, Deftones and more.

Downey’s voice is rich, intimate, and immediate, spilling secrets about love and loss with full-throated charisma in the tradition of Kurt Cobain, mixed with the evocative melodic mood of Layne Staley. His guitar playing is similarly engaging: impossibly layered and dynamic yet cutting and catchy, swirling over top of the muscular rhythmic textures laid down by Alexander.

Much as the keyboardist for The Doors would handle a bass line with a single hand, or Rush frontman Geddy Lee will work bass-synth pedals when he switches from bass to keys, Alexander’s focused dedication ensures The Dose coalesces into something much bigger than the sum of its parts, as he transforms his drum kit and synth-pedals into a complete rhythm section.

The Dose have spent three years sharpening their sound, living and working together on the road and at home in Los Angeles. The Dose EP emerged soon after, self-produced and tracked at both Welcome To 1979 and Jack White’s Third Man Records in Nashville. It was a step toward the more fully realized pronouncements of Saline.

The Dose delivers an invigorating signature sound with boots planted firmly in rock n’ roll’s past and every finger grabbing toward the future. 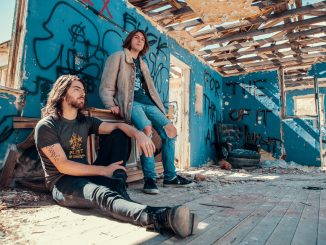