When it comes to “thrash metal,” what one band comes to mind that tops the totem pole? Okay, well…with the word “metal” engraved in their name, Metallica has ultimately become the most relevant heavy metal band our generation has seen. If you don’t agree, well allow me to throw a tidbit of knowledge your way. Eight Grammy wins, sixteen Billboard charted hits with the Black album recently clocking in its 500th nonconsecutive week on the Billboard 200 chart, the only band to play on every continent, and the third highest earning band of 2018. This list is a small needle in the haystack in terms of what they accomplished so I’ll get on with it.

Soon after Metallica released their tenth studio album in late 2016, the “Worldwired Tour” shortly followed and two years later, it’s now in the home stretch of completion this August. The Four Horsemen finally stepped back into Cleveland at the sold-out Quicken Loans Arena on February 1st for what was almost a decade from their previous “Death Magnetic Tour” and Rock-n-Roll induction in 2009. It may have been ten years since their absence in Cleveland, but I’m sitting about 16 years ever since the “Summer Sanitarium Tour” in ’03. Now I feel old!

Acclaimed comedian and hardcore Metallica fan, Jim Breuer opened the evening with his usual funny antics and building up the minute-by-minute countdown until Metallica hit the stage. I wasn’t too thrilled to hear a comedian opener, even though I love Jim Breuer. Around 9 PM, the lights inside the arena faded to black and the band’s famous entrance music of Ennio Morricone’s “The Ecstasy of Gold.”

Before the band got to the good stuff in their discography, “Hardwired” and “Atlas, Rise!” from their latest release provided a great warm-up and set the stage on what visually was going to take us into the night. As you looked up, cubes and cubes floated above the stage (which happened to take up the whole court) flashed various artwork on all sides relating to that specific song. It was only until the third song in of “Seek and Destroy” when all the cubes lowered down close enough as they hovered just above Metallica’s heads. At this point, the hardest of the hardcore fans got their throat quenched by shouting the lyrics right back towards the band.

For a band who’s been around for 30+ years, played thousands of shows, drank as much beer to supply Quicken Loans that night, surviving the tragic ’86 death of bandmate, Cliff Burton, you have to begin to wonder if there’s any fuel left in the tank. Many of the members today are raising families of their own. Priorities have shifted in the Metallica camp since the golden years, and yet they still tour, selling out stadiums and arenas across the globe.

Mid-set we finally got to the juicier part of the show when my personal live favorite, “Creeping Death” and “For Whom The Bell Toll” were introduced with a roar of yells echoing around the arena. As I watched from my seat, the crowd began to let their extremities loose, even more, allowing the horns to fly higher towards the stage. Even security had a handful picking up fans and also wheel chairing the select ‘Alcoholica’ fans out of the arena.

What makes Metallica even bigger now is not only the handful of hits they gave us or the accolades they earned but the generation they created among their fans over the years. Just glance in the crowd at the next show. You’ll see the 50-year-old metal head kid from the early 80s and the kid on top of their shoulders ear muffs intact to your everyday head-bangin’ hair thrasher who shares the exact number of times they’ve attended a Metallica show. It’s the stories we share with friends and families that translates to the people we see at their shows. James Hetfield even took time to thank everyone in attendance, evening praising a dad with his 9-year-old son up front.

If I had to pick the member who carries that same persona from back in the day, it most certainly would have to be the drummer, Lars Ulrich — always leaping up and down from his drum seat, waving to the crowd, spewing liquids at the fans and going down towards the barricade to take selfies.

Three fourths into the set, Robert Trujillo and Kirk Hammett have this thing where they’ll play tribute songs mashed up in a medley relating to the specific city they’re playing. Cleveland got metal versions of James Gang’s “Funk #49” and Michael Stanley’s “My Town.” It was a nice creative touch, but I think Robert on vocals was too much. The band left the stage briefly after “Master of Puppets” concluded thinking that’s all she wrote. If anyone is familiar with Metallica, they’re notorious for stringing us along. A few minutes later, the intro tape of “Battery,” fired up, followed by “Nothing Else Matters,” and finally, “Enter Sandman.” Looking at the setlist as a whole it wasn’t my favorite, and it appeared they wanted to get a little bit of everything in for Cleveland leaving only seven classic thrash hits sprinkled into the night.

The nearly two and half hour set flew by quickly. Not to mention the time I was allowed to shoot them. I swear we all know Metallica is known for writing 6-8 minute songs and only being able to photograph the first three felt like minutes behind the lens. Metallica was everything I expected and much more. I was so grateful to cover my all-time favorite and writing this entry still feel surreal. Thank you to Uncivil Revolt and Nasty Little Man for making this happen! I genuinely think my step is a little more significant now.

As quickly as Metallica came and went here in Cleveland, they made sure to lend their hand to the Greater Cleveland Foodbank by donating $10,000 courtesy from their non-profit organization, All Within My Hands Foundation. Metallica, I raise my half-empty glass and ask you not to make us wait another ten years. 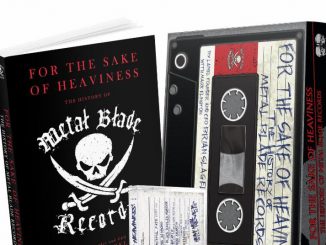 For the Sake of Heaviness: The History of Metal Blade Records 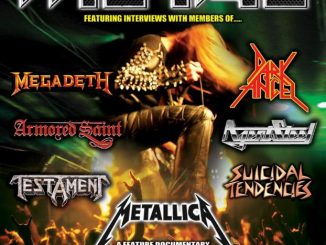