I have been wanting to experience the NAMM Show ever since my musician buddy Chris Carothers made me aware of it. It is that one weekend a year during the month of January where artists and fans flock over to the Anaheim Convention Center to check out the latest musical swag. From instruments to magazines, audio technology, software, and musical innovations, the NAMM Show has it all. There are even opportunities to meet famous musicians, some whom come to sponsor a product they are a part of or just to take in the excitement. Matt and I tried to apply for access last year to no avail, so I tried again for this and got in. Sadly Matt got stuck sitting out for the second year in a row. This would be my first time walking through the halls of the Convention Center and experience that wonder that makes the NAMM Show wonderful.

While the official start date was Thursday, Wednesday was dubbed Media Day, which is where a lot of the journalists/photographers get a sneak peek at some of the items that will be on display that weekend. One of the first things I checked out while at the event was this new soundproofing product called Air Hush. It is an inflatable sound system that is designed to absorb, block, and/or contain sound in a room. This device should come in handy recording studios and rehearsal spaces. The other thing that found most fascinating was a travel guitar that folds up with snapping or releasing the guitar strings. It is amazing at how the guitar folds with ease, and on the back, there is a clear case that shows the mechanics of how it functions. I also saw different sound systems, the unveiling of Shinedown bassist Eric Bass’ signature bass from Prestige Guitars that is very light, and different guitar straps from TSGCO, including a solid gold one that is worth millions, if I remember. Media Event day was but a taste of what I was looking forward to seeing.

From Thursday to Sunday, NAMM was in full effect. Because of work, I could not attend Thursday. From Friday-Sunday, I got myself well-acquainted with the atmosphere. As soon as walked through the convention doors, I was in music Heaven. I was so astonished by all the different items that sponsors and exhibitors were displaying on the main floor. In the first building in the basement, I was in the software area where there was an array of tech that hopes to help revolutionize sound and quality of music. One of the companies I checked out was Clear Monitor Tunes, an in-ear manufacturing company that specialized in the precision of sound. I tried them out with a bass, and I was impressed. Upstairs in the second building is where the instrument companies would display their works of art, including Pearl drums, Gibson, Fender, Jackson, and Peavey. That is also where some rock stars, including Peter Frampton, Alex Skolnick, Michael Anthony, Jerry Cantrell, and Phil Demmel, made appearances to greet their fans. Downstairs, out on the main floor, is where more instruments, pedals, sound systems, amps, etc. was being shown off. I remember coming across a product called Eargasm Earplugs. Its purpose is to filter out noise levels while making communication much more effective. I bought some and have been loving them ever since. I would also learn about TonePros, whose “patented pinch” helps solidify the bridge and tailpiece of the guitar, which according to their website, delivers perfect intonation and singing sustainability.

There was something for everyone at NAMM. Not only were there the products to check out, but also small performances out in the courtyard area. What I also enjoyed was running to so many of my music friends and family who have to come to appreciate the experience. The NAMM Show was everything I thought it was and more. I am already counting the days until the next event. I only hope it will continue to blow my mind as it did this year. To the NAMM Show 2019, I salute you. Horns up!!!

Full The NAMM Show gallery below: 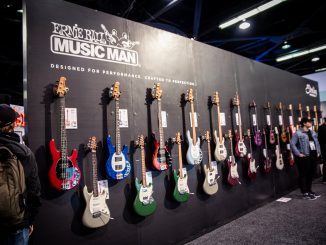