In 2016, I was introduced to a mastermind in Evan Rodaniche. He has this craft for making creative, alluring music with his band, CAGE9. The band was introduced to me with their album, Illuminator, an experimental, ambitious, gut-driven rock induced record.

2019 is upon us, and all the quietness from the band had me worried but with one listen to the group’s newest album, Hypesthesia. I know that all the downtime the band had was put to good use.

With CAGE9 having 15+ years in the business, 8 albums and over 100 songs released, the guys never cease to amaze me. This album from start to finish is even more defining and illuminating then the past.

Hypesthesia hits you hard with a sonically diverse run down of tracks. “3ARTHQUAKE,” the opening track and platform single video, has a lullaby introduction which smoothly takes you into the adventure of heavier driven ambiance of rock. The allure of the transitions just makes you feel alive!

“THE VERTIGO” brings the thought of being lost in an asylum and trying to find your way out. Driving rhythmic guitar work. Appealing to anyone into that modern rock sound.

“DANCE THE MACABRE” is moody, dark, electrifying! The chorus pops because the verses are more subdued and eerie yet brilliantly meshes. Probably one of my top songs on the album.

“MONSTERS +VULTURES” just warms my heart because this tune is one of the bands heavier tracks. Add that uplifting energy in the chorus, and you have a piece of beauty in my eyes.

“ICE AEGE” and “HYPESTHESIA” are unforgettable songs due to the vocal patterns, which takes the songs to new heights.

“PARALLEL UNIVERSE” lays out that modern alternative rock vibe. Truthful lyrics and that easy progressions from verse to chorus makes it bleed with beauty.

“WASTELAND” has a more punk and metal attitude. A nice change for the record and it shows the versatility in the band as creators.

The bands rendition of “ROOSTER” by Alice in Chains is dark, captivating and has elegance to it.

The band finishes the disc with the unbelievable “EXPECTATIONS.” A six minute song that is full of monotony but is so hypnotic, beautifully laid out, and seductively alluring that you just fall into the mood and vibe of it.

CAGE9 in my opinion has an amazing, most talented, and creative passion for making art, and I am honored to be able to be part of it with this new listen to Hypesthesia. 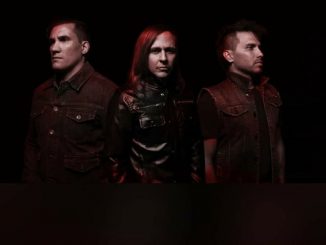