The New Wave of American Heavy Metal was one of the biggest cornerstones in heavy metal during the mid-1990s to early to mid-2000s. One of those groups that was instrumental in the movement was Virginia’s own groove/thrash immortals Lamb of God. They are known for their unforgiving screams and savage guitar riffs, provided in part by lead guitarist, Mark Morton. Following in the footsteps of guitar legend Slash, Morton has decided to expand his guitar knowledge with his own solo album, Anesthetic. He has recruited an all-star lineup of singers who brought their own unique styles to Morton’s aggressive nature. From Myles Kennedy to Mark Morales, Jake Oni, Alissa White-Gluz, and the late great Chester Bennington, Anesthetic takes several turns musically. Morton also had other well-known metal musicians come in to play bass and drums, which includes Megadeth’s David Ellefson and Stone Sour’s Roy Mayorga. The word “anesthetic” means a substance used to dull pain, so let us see if Morton’s debut album can cure what ails my soul.

The first track happens to be the most important one off of Anesthetic, the Chester Bennington led “Cross Off.” It has been almost 2 years since Bennington’s untimely departure, and it was bittersweet hearing his voice and hollows. This is arguably his best song outside of Linkin Park. He and Morton go together really well on this song. Trivium bassist and drummer Paolo Gregoletto and Alex Bent give a pulsating performance on their instruments. Papa Roach’s Jacoby Shaddix was up next to grab the mic for “Sworn Apart.” He was never really my favorite vocalist, but I have to say, he sounds good. Morton plays this awesome alternative metal riff that has a well-placed groove, and he plays a kick-ass melodic solo. “Axis” sees him team up with alternative/blues rock artist Mark Lanegan. This is my favorite track because it is heavy but subtle in the music’s attitude. Lanegan’s rustic voice makes it sound raw and powerful. Morton goes for an Austin Blues guitar feel that I would normally hear from artists Stevie Ray Vaughn and Gary Clark Jr. He smolders on the beat and solo. Marc Ford from the Black Crowes lends his guitar finesse, and gel together beautifully. Ford’s old bandmate, Steve Gorman, nails it on drums, while Alice in Chains bassist Mike Inez wails it on the bass beats.

The album accelerates once again when Testament’s Chuck Billy and Oni’s Jake Oni duke it out in “The Never.” We begin to hear the thrash/groove approach that Morton is known for, with a touch of progressive metal. Billy soars high on the verses, while Oni crushes our ears during the pre-chorus. Once we enter the chorus, they double up on the vocals and nail us with a sledgehammer. Ellefson and Mayorga make their first appearance, and dominate the tune’s rhythmic pulse. Things go back to an alternative metal/hard rock attitude when Alter Bridge’s Myles Kennedy belts it out for “Save Defiance.” He marinates the song with quality pipes, continuing to prove why he is one of the best vocalists out there. Just like with Slash, Kennedy and Morton are an unlikely pair that create magic, writing lyrics about rising up and never stop fighting. Inez returns to battle on the bass, while Korn’s Ray Luzier brings the thunder on drums. Sons of Texas’ Mark Morales comes in to give us his ultra-cool Texas swagger for “Blur.” Morton’s playing style for this song is very Southern rock/metal, slick and blazing. It is like a cross between Lynyrd Skynyrd and Molly Hatchet. Gorman brings his Southern stride to the drums, and Inez continues to lay down dirty bass licks that the song tasty to the ears.

Buckcherry’s Josh Todd brings Anaheim hard rock galore to “Back From the Dead.” His voice is pure adrenaline and angst, blazing us with his melodic approach. Morton soars high with the solo he performs off this song. Mayorga bashes and crashes on the kit, while Inez wails it. Morton decides to throw us a curveball by composing soul/R&B tune with Naeemah Maddox, entitled “Reveal.” At first, I did not like the approach, but after listening to it a few more time, it is starting to grow on me. Maddox’s singing is full of neo soul. Lionize keyboardist Chris Brooks playing reminds me of Ray Manzarek of The Doors. Clutch’s Jean-Paul Gaster gives us some jazz-inspired drumming, and Yanni Papadopoulos’ soft style on the bass make it sound lovely. I still do not know if this song belongs on this record, but it bold, risky, and creative. In “Imaginary Days,” Morton steps up to the mic, and he sounds pretty good. He does not hold anything back while singing on this song. It is very alternative, but it still has some heavy metal flavor to it. Inez and Luzier are solid together. We have come to the end with “Truth is Dead.” Arch Enemy’s songstress Alissa White-Gluz and Morton’s Lamb of God brother Randy Blythe do some serious damage with their demonic screams. Morton goes postal with the style he is accustomed to, melodic groove/death metal. Mayorga and Ellefson kill it on the grand finale. Wrapping up the album with a moshing headbanger is a good call.

Morton has put together a great heavy metal album that is chalk full of different styles of heavy rock. He does not just settle for one particular technique, but he explores all styles and nails it in the head. From blues to groove metal, alternative, soul, and death metal, Anesthetic has it all. I would love to him sing more often, especially if he decides to put out another solo record in the future. He took a risk, got out what he wanted to say, and I think the music world is all the better for it. To Mark Morton, I salute you. Horns up!!! 8.9/10 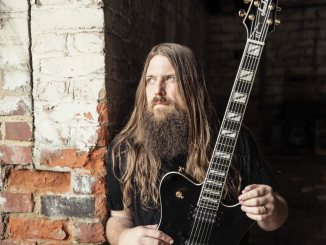 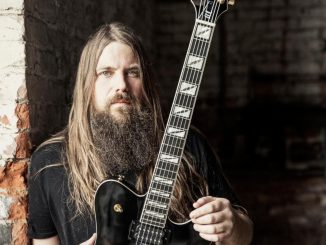