On Wednesday March 13th, The Dose are celebrating the album’s release with a FREE show at Madame Siam (1723 N. Hudson Ave). They go on at 10pm.

The album was produced by Keith Nelson (Buckcherry) and mixed by Joe Barresi (Queens of the Stone Age, Tool).

Over the course of the past year, The Dose have been covered by Kerrang, Consequence of Sound, Billboard, Guitar World, Loudwire and more.

Vocalist/guitarist Indio Downey and drummer Ralph Alexander stir the most potent elements of the rock n’ roll landscape of the past, present, and future into a musical cauldron. Their songs breathlessly swerve between driving, hooky, melancholic and anthemic, careening from self-loathing to self-empowerment, with vigor

Their debut full-length is twelve songs of power, a diverse offering anchored by authenticity and vision. On Saline, The Dose delivers missives about hope, perseverance, discipline, and commitment, against a backdrop forged from a dizzying mixture. There’s the unpretentious heart-on-sleeve bombast of the Pacific Northwest of the nineties; the enigmatic elevation of eighties postpunk; the unapologetic groove of the working class neighborhoods of seventies England; and a whiff of the Mississippi Delta firmament that influenced it all

Praised by Guitar World for its “’nineties-inspired firepower,” Saline was produced by Keith Nelson (Buckcherry) and mixed by Joe Baressi (Tool, Queens Of The Stone Age, Soundgarden). The timeless energy of culture-shifting trailblazers Nirvana, Black Sabbath, and Led Zeppelin; the psych-driven rumble of Tame Impala; the throwback groove of The Sword; the urgent restlessness of The Sex Pistols; the atmospheric gloom of The Cure; it all converges to make something refreshingly unique, a mighty counterpart to similarly hardworking two-piece bands like Royal Blood and The Black Keys

Downey’s voice is rich, intimate, and immediate, spilling secrets about love and loss with full-throated charisma in the tradition of Kurt Cobain, mixed with the evocative melodic mood of Layne Staley. His guitar playing is similarly engaging: impossibly layered and dynamic yet cutting and catchy, swirling over top of the muscular rhythmic textures laid down by Alexander.

Much as the keyboardist for The Doors would handle a bass line with a single hand, or Rush frontman Geddy Lee will work bass-synth pedals when he switches from bass to keys, Alexander’s focused dedication ensures The Dose coalesces into something much bigger than the sum of its parts, as he transforms his drum kit and synth-pedals into a complete rhythm section

The Dose have spent three years sharpening their sound, living and working together on the road and at home in Los Angeles. They began as a trio, but after their bass player was a no-show for an early gig, Downey and Alexander took the stage alone. They emerged surprised and newly inspired by their chemistry and never looked back, splitting for the South, where they toiled for a month to harness what they’d discovered in that first performance as a duo.

(“The Dose” is a play on words; “dos” is Spanish for “two” and the pair offers a “dose” of electric energy for the increasingly rock-starved masses.)

The Dose EP emerged soon after, self-produced and tracked at both Welcome To 1979 and Jack White’s Third Man Records in Nashville, Tennessee, and featuring effortlessly driving songs like “Cold Hands” and “Glory.” It was a step toward the more fully realized pronouncements of Saline, itself the rich reward of months spent writing and jamming together. The songs on Saline would sound equally at home blasting from the speakers inside Jimmy Page’s castle, from beneath the tent at a festival stage, and from the rolled down windows of a speeding car occupied by young lovers.

The Dose delivers an invigorating signature sound with boots planted firmly in rock n’ roll’s past and every finger grabbing toward the future. This is music of liberation and determination, of strength through adversity. As Indio Downey once put it himself: “Let rock n’ roll’s heaviness fill up your inner-emptiness.”

The Dose is comprised of Indio Downey on vocals/guitar and Ralph Alexander on drums.

They just toured Europe and the U.S. with Good Charlotte and are managed by Joel and Benji Madden’s company, MDDN. 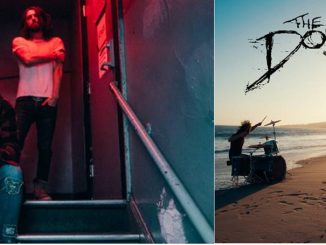