One of the main ingredients that makes for a successful rock is not only the energy that comes from the group/artist, but also the energy the fans give off during the show. They are either going to love the show, or they are going to think it is boring. Some of the most exciting shows I have been to that featured intense fan reactions included Gojira, Stone Sour, Parkway Drive, Avatar, and Trivium. From moshing to crowd surfing, metal fans know how to be part of the show without actually being in the band. On March 27th, Matt and I headed back to the Observatory to watch metalcore/hardcore greats All That Remains, Attila, and Escape to Fate kick the roof off the joint. I have seen a lot chaotic headbanging, but after that night, nothing would compare to what I witnessed.

After Sleep Signals wrapped up their performance, screamo maniacs Escape the Fate continued the mayhem that was already happening. The natives of Las Vegas continue to walk the fine line between metalcore/screamo and emo with their 2018 release, I Am Human. They were not at all what I was expecting. While I knew about their emo background, they showed a heavy metal mean streak in their set. Craig Mabbit was razor sharp with his melodic singing and screams. Kevin “Thrasher” Gruft brings a certain classic hard rock vibe to his lead guitar riffs, while dipping into a metalcore aggression. He is like a cross between Richie Blackmore and Trivium’s Corey Beaulieu. Rhythm guitarist TJ Bell and drummer Robert Ortiz crush the melodies, providing infective crashes and wails. Through the “circle of death” that was being formed on the main floor, Escape the Fate ravaged the set with heavy tunes like “Do You Love Me,” “This War is Ours (The Guillotine II),” “Digging My Own Grave,” “Empire,” “Gorgeous Nightmare,” and “One for the Money.” I may not like emo, but if Escape the Fate can blend it with a vicious metal sound like they are doing, what’s not to like about them.

Full Escape the Fate gallery below:

Now it was time for anarchy to rear its ugly head into the Observatory, for Attila has returned with a vengeance. It has been about 3 years since the metalcore outfit from Atlanta released a new album, but after listening to their newest monster, Villain, I can say it is their finest work yet. The record has been met with widespread acclaim and since it was put out independently, it shows the band is taking charge of their own destiny. As soon as the first note to “Perdition” was struck, you knew something chaotic was going to happen. Frontman Chris “Fronz” Fronzak has a cult personality, charming the fans with his rancorous voice and hollering screams. While guitarist Chris Linck, bassist Kalan Blehm, and drummer Bryan McClure are bombarding our ears with earth-shattering metal insanity, Fronz is encouraging the fans to mosh and stage dive like madmen. So many fans charged the stage and launched themselves into the pits. Matt and I also participated, and it was exhilarating to do, especially since it our first time. I just thank God they caught me. From “Three 6,” to “Toxic,” “Bulletproof,” “Moshpit,” “Blackout,” “Middle Fingers Up,” “Party With the Devil,” “Villain,” “Proving Grounds,” and “Pizza,” Attila turned the Observatory into a war zone. Fear not, for we were ready for battle and willing to follow Attila into the metal trenches.

After experiencing exciting chaos, All That Remains comes to the stage next. It has been a trying run for the group ever since the sudden loss of founding member and lead guitarist Oli Herbert. He did, however, leave us a gift by shredding one last time on their 9th release, Victim on the New Disease. Frontman Philip Labonte was full of raw emotion, belting out the words with such conviction. He laid it all out that night to make his old friend and comrade Oli proud, and we think he was. Chelsea Grin’s former axe man Jason Richardson has joined the group, and he shreds with determination and ferocity. He handles everything that Oli wrote with such ease, and the fans love him in this group. Mike Martin performed those melodic licks very well, while drummer Jason Costa and bassist Aaron Patrick brought the thundering beats to the tunes. All That Remains performed a good mixture of material from both their new record and their 2006 breakthrough album, The Fall of Ideals. From “Fuck Love” to “Blood I Spill,” “No Knock,” “Chiron,” “Hold On,” “Six,” “The Air That I Breathe,” “Everything’s Wrong,” “Wasteland,” “What If I Was Nothing?,” “This Calling,” and “Two Weeks,” this was night metalheads needed from All That Remains. I would also like to believe that Oli was up there alongside his brothers, riffing into our souls.

Full All That Remains gallery below:

After that night, I think every fan will wake up feeling bruised and achy, but they will say it was worth it. This was the craziest I have seen the Observatory ever become. All That Remains was at their metalcore best, Attila whipped the whole house into a frenzy, and Escape the Fate conquered the night. During the night, I made a new friend in Marissa Wray, who was full of crazy energy. With endless stage diving and moshing, she was having the time of her life as much as I was. She even convinced the security guard in the photo pit to let her dance on stage for All That Remains. That is what I am talking about, fan participation is key to a successful show, and it was very successful. To All That Remains, Attila, and Escape the Fate, I salute you. Horns up!!! 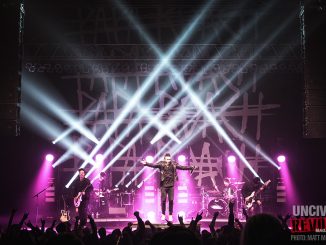 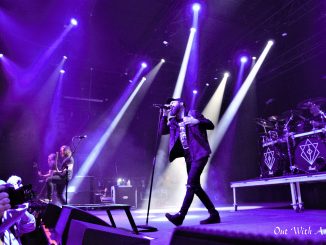 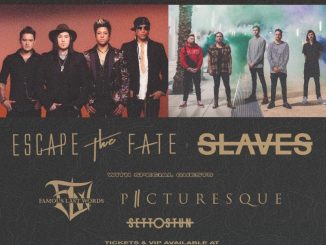