I have been to many festivals in the Southern California. From Stagecoach at Indio in 2008 to Ozzfest Meets Knotfest in San Bernardino and Las Rageous in Las Vegas. There are not a lot festivals in my hometown because there is simply not enough space or land to hold one. Well, that all changed when it was announced that on March 30th, the Grove of Anaheim would host the first ever Swanfest. It is a music festival experience where post-hardcore, metalcore, and djent groups flock to Anaheim to give their fans a day they will not forget. I went that day with my work colleague, Righteous Wes Hanson. It was held outside the venue, and broken up into 2 stages, Stage 1 and Stage 2. Stage 1 is the main stage where an elite group of metal bands performed their balls off. Stage 2 is the smaller set where bands specializing in post-hardcore and screamo let loose. This piece will focus on the main stage, where djent and metalcore ruled the day with an iron fist.

After missing Sianvar, I made just in time to catch Volumes. I have been following these guys closely for the past couple years ever since they dropped their 3rd release in 2017, Different Animals. Armed with 2 vocalists, rapper/unclean singer Gus Farias and clean/unclean vocalist Myke Terry, Volumes ravaged the stage with nu metalcore and djent style. Terry joined the group in 2016 and he has been a machine that knows how to brutal and melodic at the same time. Gus’ brother, guitarist Diego, plays this progressive groove technique that gives the riff a lively sound. Bassist Raad Soudani and drummer Nick Ursich crank up the volume with their effective groove beats. Volumes played 2 songs from each of their albums, from “The Mixture” to “Wormholes,” “Feels Good,” “Pistol Play,” and “Wave Control.” When they went into “Edge of the Earth,” they brought out a surprise guest that made the fans go nuts for, Joe Buras from Bornof Osiris. Volumes did their job and turned up the heat on Swanfest, and the day had only just begun.

Following Volumes was a progressive metal group from Toronto, Canada that looked to Swanfest a chill on a pretty hot afternoon. They call themselves Intervals, and they let their instruments do the talking. Led by lead guitarist and sole member Aaron Marshall, they were quick on the frets and snappy on the djent beats. Marshall is an amazing guitarist, giving the djent sound a progressive metal feel. Riff after riff, solo after solo, this stood tall and slayed the crowd with his licks. Backing him up were bassist Jacob Umansky, guitarists Thomas Griggs and Sam Jacobs, and drummer Nathan Bulla, all of whom were beat-making machines, full of cunning talent. Intervals gave the fans, including myself, goosebumps with their impactful tunes like “A Different Light,” “Touch and Go,” “By Far and Away,” “Impulsively Responsible,” “Fable,” “Alchemy,” and the clincher, “Mata Hari.” For 30 solid minutes, Intervals brought instrumental rock and djent together like peanut and jelly, a great combination that has a terrific taste.

Chicago’s own Veil of Maya was up next on the main stage. They once started as a deathcore group, but have since evolved in a more metalcore band with a taste for djent. I caught them last year at the Summer Slaughter Tour, and I was looking forward to them savagely blowing out the fans eardrums. In the beginning of “Whistleblower,” bassist Danny Hauser slipped and fell off the stage into the photo pit. Laughing it off like it was nothing, he returned to the stage where he beat us down with his bass beats. Lukas Magyar exploded with his hollering hardcore screams and charismatic appearance. Guitarist Marc Okubo razzle and dazzled the set with his infectious riffs, while drummer Sam Applebaum wailed and banged effectively on the kit. Disregarding their past deathcore records with former singer Brandon Butler, Veil of Maya focused on  the metalcore style they have adopted to 2015’s Matriarch and 2017’s False Idol. From “Leeloo” to “Overthrow,” “Doublespeak,” “Lisbeth,” “Pool Spray,” “Lucy,” and “Mikasa,” Veil of Maya owned the crowd for 30 minutes.

Full Veil of Maya gallery below:

After Don Broco finished their set (I missed them), We Came as Romans came to slay the Anaheim scene. Last time I saw them, they opened up for Bullet For My Valentine at the Wiltern last year. They have had a trying year with the sudden loss of co-lead singer Kyle Pavone, but like the Romans, they soldier and look to overcome this obstacle that was thrown in their path. Dave Stephens stepped up his game as both the screamer and singer. Lead guitarist Joshua Moore shined like the sun with his glorious lead riffs, while rhythm guitarist Lou Cotton dominated the melodies. Andy Glass seized the bass lines, while drummer David Puckett continues to be an essential member on the kit ever since joining 2 years ago. Honoring Pavone’s memory, We Came as Romans stormed on with their vicious yet melodic set list that included songs from 2013’s Tracing Back Roots and 2017’s Cold Like War, the last one featuring Pavone. From “Tracing Back Roots” to “Wasted Age,” “Lost in the Moment,” “Encoder,” “Hope,” “Foreign Fire,” and “Cold Like War,” post-hardcore stood toe-to-toe with metalcore and shattered eardrums across the area.

Full We Came as Romans gallery below:

Up next was a group I have been wanting to check out for quite some time, Crown the Empire. The post-hardcore outfit from Dallas that incorporates hard rock and metalcore into their sound were a sight for sore eyes. I was blown away by frontman Andy Leo, who not only has the voice but also the magnetism that makes Crown the Empire that good, sporting a Matrix style black jacket. Bassist Hayden Tree and lead axe man Brandon Hoover kicked ass on the riffs and beats. Not only that, Hoover handles some of the clean singing, while Tree is a beast with his blistering screams. Those two are a potent duo ever since co-lead singer David Escamilla left in 2017. Their whole set showcased their talents that have made them a household new in the metal and hardcore scene. From “Sudden Sky” to “The Fallout,” “Memories of a Broken Heart,” “20/20,” “What I Am,” “Zero,” “Hologram,” and “Machines,” Crown the Empire overtook Swanfest with viciousness. They are now working on new music, and I cannot wait to hear what they have in store for us.

Full Crown the Empire gallery below:

Following Crown the Empire are true pioneers in the djent sound, Periphery. I first saw them over Thanksgiving weekend in 2017 when they opened for Animals as Leaders. They were full passion and excitement when they hit the main stage. Frontman Spencer Sotelo, sporting a hoody and sunglasses, wowed the fans with sinister yet glorious voice. He is arguably one of the best singers in the metal scene today. Misha “Bulb” Mansoor, who founded the band, worked wonders on his guitar, bringing technical, progressive prowess that has helped made Periphery one of the top djent acts out there. Along with guitarists Mark Holcomb and Jake Bowen, they each were riff masters. Drummer Matt Halpern killed it on the fill. The bass is pre-programed into the set because they do not have a live bassist anymore, not since Adam “Nolly” Getgood left in 2017. For about 45 minutes, Periphery gave the Anaheim crowd their very best, with songs that included “The Bad Thing,” “The Way the News Goes…,” “Marigold,” “Miles Zero,” and “Masamune.” They are also getting ready for the release of their 6th album, Periphery IV: Hail Stan, where they debuted 2 new songs for the first time live, “Garden in the Bones” and “Blood Eagle.” The fans fell in love with the new tunes, as did I. Periphery were dynamite on stage, owning the Swanfest crowd.

The headliner made their way to the stage, looking to enlighten people’s souls. They are Sacramento’s own post-hardcore sons, Dance Gavin Dance. Having just released their latest record, Artificial Selection, they look to inspire fans as well as make them rock out. I saw them last year at the Shrine Auditorium opening for Underøath. When I first saw them, I was not all that impressed with them, but this time around, I started to get it when they started with “Son of Robot.” Their style of post-hardcore and math rock has a danceable beat that is very appealing to fans. Co-lead vocalists Tilian and Jon Mess bring their own unique styles of screamo and clean singing together to make something beautiful yet brutal. Lead guitarist Will Swan is all over the guitar map when comes to styles, from prog rock to experimental, post-hardcore, and jazz-fusion to name a few. The entire audience was eating out of the palm of their hands for over an hour. From “Suspended in This Disaster” to “Summertime Gladness,” “Count Bassy,” “Chuck vs. The Giant Tortoise,” “Uneasy Hearts Weigh the Most,” “Betrayed by the Game,” “We Own the Night,” “Man of the Year,” and the live debuts of “The Rattler” and “Head Hunter,” the fans were in a jovial mode.

Throughout the whole day, Swanfest was a sea full of music fans from both the metal side and post-hardcore side. Every group that went on Stage 1 came, saw, and kicked major ass. On Stage 2, the smaller but still vital groups rocked their balls off as well. Be sure to read that piece as well. Swanfest was a smashing success, and I hope it returns next year for more. To everyone on Stage 1 of Swanfest, I salute you. Horns up!!! 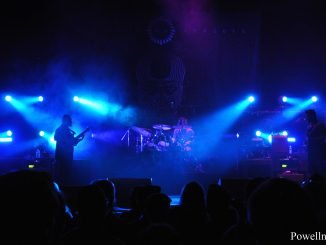 Animals As Leaders and Periphery Bring Djent to the Wiltern 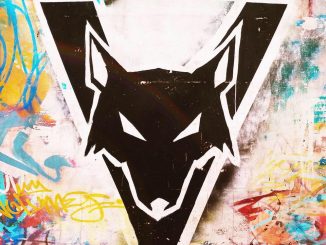 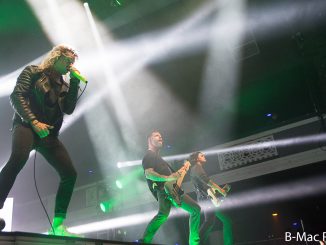 Underøath Brings the Rapture To the Shrine Auditorium