Back in 2004 while I was attending art school, my roommate at the time formally introduced me Cradle of Filth in the most brutal way imaginable. By setting “Cruelty Brought Thee Orchids” to his alarm clock at the highest setting possible (he was a deep sleeper). When 6 AM hit, I didn’t know if someone was in trouble or a pterodactyl was screaming at the door, but all I know was my heart felt as if it was going to burst out of my chest. My girlfriend, who loves the darkest side of music, got me listening more to the band and by the time the tour was announced she set it in stone that we’re both going. Cradle of Filth kicked off “Cryptoriana – The Second Coming of Vice World Tour 2019” Tuesday (March 26th) as it made its stop at the House of Blues in Cleveland, OH.

The whole tour brought two other outstanding bands that complemented one another. Raven Black and Wednesday 13 both hailing from Los Angeles, CA. Makeup, costuming, and light theatricals played heavily for all three. Sadly, I missed the opening three songs to photograph Raven Black but was able to snap a few from general admission. Vocalist Wednesday 13 really brought out the visuals. In my opinion, he edged out founder and frontman Dani Filth in that department and that’s not easy to do. He pretty much had an outfit change for each song as dramatic lighting flashed across the stage and glow-in-the-dark body paint radiated the singer.

Dani possess a rare trait as a vocalist. One, his vocal range is off the scale from anything I heard. One second, he could be digging deep thirsty growls and at a flip of a switch, his octave range expands far beyond what most humans achieve. I encourage you to read a few passages of lyrics from COF. Dani possesses such a unique ‘Renaissance’ approach when he writes. It’s not too literal nor concrete. It really makes you stop and listening to every word spoken. “Her Ghost in the Fog” fairs as a great recommendation.

When it’s all said and done, Cradle of Filth really knows how to captivate the goth and metalheads of Cleveland. They’ve been on this stage for a better part of two and a half decades. Big strapping boots, leather ripped attire, face paint, glowing lanterns acting as mood lighting, and the fog, oh the fog. A cemetery atmosphere indeed took over House of Blues that night. Cleveland needed this show more than ever. Metal shows have been tumbleweeds blowing in the wind here lately. Even though Dani was sporting less makeup than usual, it didn’t weaken the fact that the band came and performed all the “Filthy” hits for us in an hour and forty-five-minute set! After the show, I managed to catch up with Mushroomhead guitarist, Tommy Shaffner and from previous experiences, he admitted that this was the bands best he’s ever seen them. Overall, I was blown away with my first COF encounter. The vocals sounded so crisp and the other instruments didn’t seem to compete with one another. Hearing Lindsay Schoolcraft sing in the soft melodies of “Her Ghost in the Fog” and “Nymphetamine (fix)” really added emotional balance. Be sure to catch the remaining shows in the states as this leg concludes in the middle of April.

1. Gilded Cunt
2. Nemesis
3. Right Wing of the Garden Triptych
4. Heartbreak and Seance
5. Bathory Aria: Benighted Like Usher / A Murder of Ravens in Fugue / Eyes That Witnessed Madness
6. Wester Vespertine
7. Dusk and Her Embrace
8. You Will Know the Lion by His Claw
Encore:
9. The Promise of Fever
10. Saffron’s Curse
11. Nymphetamine (Fix)
12. Honey and Sulphur
13. Her Ghost in the Fog 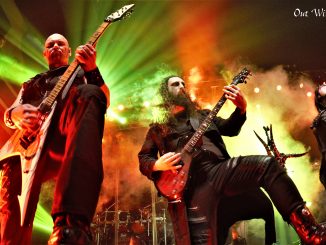