New Album, Into The Black, Out Now

Los Angeles-based producer Daniel Graves has been turning heads with his addictive industrial pop project, AESTHETIC PERFECTION, for nearly two decades. Since forming in 2000, Graves has released five full-length albums, numerous singles and music videos, all the while reinventing what it means to be a dark electro artist. Blending industrial, pop, goth, and everything in between, AESTHETIC PERFECTION defies definitions in a world that demands them.

Today marks the release of the visually stunning and eccentric new music video for “Gods & Gold”, an instantly gripping industrial pop crossover anthem with an unforgettable hook that listeners will be humming for days. The track features scorching guitars by the inimitable Richard Z. Kruspe of Rammstein, who adds an extra aggressive punch to the tune. Watch the deliciously avant garde video now via Alternative Press here: https://www.altpress.com/features/aesthetic-perfection-gods-and-gold-rammstein/

AESTHETIC PERFECTION mastermind Daniel Graves says about “Gods & Gold”: “Gods & Gold was a very challenging song for us to work on. I really wanted to push the envelope here and try something new. We’d been tinkering with it for quite some time and it was just coming up short. Once our friend Richard Kruspe expressed interest in playing on the record, I instantly knew he was the missing puzzle piece. I didn’t even realize I’d had his playing style and vibe in mind when I was writing the track until that very second. Then BOOM, just like magic it all came together. It instantly became our favorite song and obvious choice for the first track on the album. Of course, we’re all enormous Rammstein fans and honored to finally work with Richard in a professional capacity.”

“Gods & Gold” is cut from AESTHETIC PERFECTION‘s fifth and latest studio album, Into The Black, which hit stores everywhere on March 29 via Close to Human Music. Featuring an all-star cast of collaborators such as the aforementioned Richard Z. Kruspe, Jinxx of Black Veil Brides, Mick Kenney of Anaal Nathrakh and Krischan Wesenberg of Rotersand, Into The Black is the most mature AESTHETIC PERFECTION album to date. Fans can order Into The Black and “Gods & Gold” now via Apple Music, Amazon and Bandcamp. Physical editions and merch are available here, and the album can be streamed via Spotify.

Dark and gritty, yet undeniably catchy and melodic, Into The Black builds upon the band’s past while solidly keeping its eyes focused on the future. From the haunting electronic melodies of “Supernatural” to the twangy guitars of “Echoes”, from the punch-to-the-gut beat of “No Boys Allowed” to the soaring highs of “Mourning Doves”, Daniel Graves takes the transgressive art form known as industrial pop to the next level.

AESTHETIC PERFECTION will head out on a full North American headline tour beginning September 6, 2019 in San Diego, CA. The tour will feature support artist Empathy Test and will visit over a month’s-worth of cities, coming to a close in Los Angeles, CA on October 19. See below for all tour dates, and visit www.aesthetic-perfection.net for tickets and here for VIP information. 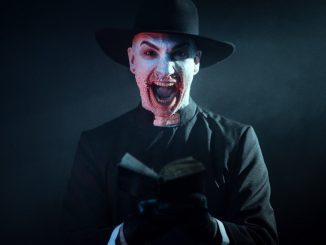 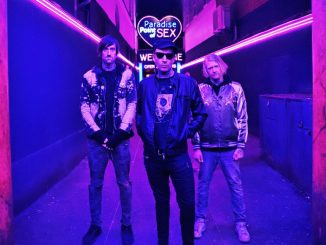 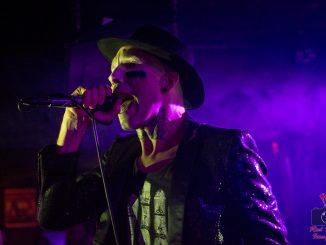 Aesthetic Perfection Makes it up to the Fans