In 2003, Evanescence entered the music scene, and I was taken back by the amazing heavy rock melodies as well as the enchanting vocals by frontwoman Amy Lee. She had this sort of gothic beauty without being truly gothic; just a mysterious loveliness to go along with her colorful 3 octave range. Recently, down at the Whisky, I saw a young singer who reminded me of Lee as well as Lita Ford and Jill Janus. She is Blue Midnight’s leader Justine Glaser. The blue-haired songstress has been making waves in the music world with her band. With their mixture of classical symphony and grungy 90s hard rock, Blue Midnight have been dubbed as a Dream Metal group. After their performance where they opened for Lita Ford, Glaser stepped outside and we had ourselves a chat.

According to her, the group is called Blue Midnight because she considers herself very blue, and like the name ‘midnight.’ Originally, she wanted to call the group Midnight Blue, but it was already taken. So, she decided to flip it around, and now we have Blue Midnight. Having first started playing piano at age 8, Glaser has been composing music since she was 12. She also knows how to play the harp, and hopes to one day incorporate into her live act. Blue Midnight loves fuse different genres into their sound, which is what Glaser loves about in this group. Some of the biggest influences include Nightwish, Tool, Within Temptation, Korn, and most of all, Dream Theater. While most groups put in keyboardists, she decided to be different and add a violinist in Edgar Sandoval. When it comes to Blue Midnight’s original material, she suggests fans check out “Acid Rain,” “Needle,” “My Only,” and “Nightshade.” She would go into detail about what “Needle” is about. We would go on to discuss Blue Midnight’s plans for the rest year, which included a spot for Aftershock, the same night as Korn and Tool.

Glaser was an absolute delight to speak to. She is young, hungry, full of mystery, and she has what it takes to hopefully make it. To be on the same bill of a major rock festival with Korn and Tool is a huge achievement. I look forward to seeing what Blue Midnight comes up with down the line. The line-up that Glaser put together is top-notch and they have excellent chemistry. Look out Amy Lee. You got competition. To Justine Glaser, I salute you. Horns up!!! 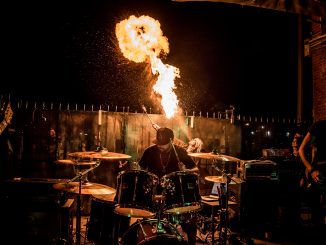 Young Blood in Pomona with Blue Midnight and Fate DeStroyed