French deathcore heavyweights BETRAYING THE MARTYRS recently teased the upcoming release of their fourth full-length studio album, Rapture, preparing fans for what they describe as their “ultimate” album. Today, the band has revealed more new album details, plus a new music video for the single “Parasite”. The video can be viewed now via the Sumerian Records YouTube channel in anticipation of the album’s release via the label on September 13, 2019.

“Parasite” is a barrage of punishing riffs and crushing grooves, and a true depiction of what’s to come on their next full-length release. Check out the stunning video, directed by Igor Omodei, here: https://youtu.be/Y3a5D1nItkE

Vocalist Aaron Matts comments on the single and video: “The song is a subject that I’ve wanted to touch on for quite some time now. It speaks of an internal battle of the minds between myself and that evil self that I’m sure we all have and know all too well. The story speaks of the innocent untainted self that ultimately trumps and returns to defeat this metaphorical parasite of depression and anxiety. The song is more of a celebration of overcoming a dark period in my life, but can be seen from more than one perspective. We’re in love with the music video – Igor did a fantastic job as he always does, and we absolutely cannot wait for people to see what we’ve been working so hard on!”

“Parasite” follows the single “Eternal Machine”, which is currently approaching 200k views on YouTube. Both tracks will appear on Rapture. Check out “Eternal Machine” here: https://youtu.be/u7J4cXFpCZ0

Rapture promises to deliver many more neck-breaking metal tracks packed with huge hooks and melodies. The sextet set out to create their most impressive release yet and have exceeded all expectations with Rapture. Tracks like “Incarcerated” depict how deep the band is willing to go down the personal rabbit hole lyrically, while songs like “Rapture” and “Imagine” showcase the true span of the band’s musical spectrum – proving that any metal fan can find something to love on Rapture.

Aaron comments on Rapture: “Rapture for us is a product of each one of our experiences up until this moment; each moment lived on the road, and every drop of inspiration picked up along the way. Written musically in the only way we know how, we took each one of our musical tastes and formed it into the ultimate album for ourselves, hoping that it will translate and fall onto the ears of the listeners the same way it falls onto ours. Rapture is a musical journey through each one of our minds, lyrics that come from both the darkest and lightest corners of our souls. We put everything into this one, leaving behind any preconceptions, and what came out the other side is something that we’re all so proud of, and we hope that the listener will feel it within themselves also.”

Rapture was produced by BETRAYING THE MARTYRS, with individual instrument and recording duties carried out by Tomás Raclavský at Babylon Studio in Jenikov, Czech Republic, Lucas d’Angelo at Dangelosound Studio in Paris, France, and Justin Paul Hill at Whitehouse Studios in Reading, United Kingdom. Rapture was mixed and mastered by Henrik Udd at Henrik Udd Studio in Sweden.

BETRAYING THE MARTYRS will soon announce a full European headline tour. In the meantime, the band is about to kick off their first headline tour of North America! The “Summer Rapture Tour 2019,” also featuring support from Entheos, Within Destruction, Sentinels and Defying Decay, will kick off this week on June 28 in Stanhope, N.J. See below for a full listing of currently announced North American tour dates:

Their stunning debut offering, Breath In Life (2011), made a huge impact in North America and Europe and quickly established BETRAYING THE MARTYRS as one of the hottest new bands around. Coupled with relentless touring and high-profile festival appearances including Rockstar Energy Drink Mayhem Festival and All Stars, the band quickly built a strong fan base, which would only continue to grow throughout their career.

Their second album, Phantom (2014), saw BETRAYING THE MARTYRS take their live show to the next level, earning them slots at the biggest European festivals, including Grass Pop, With Full Force, Resurrection Festival and more, and reach entirely new audiences with their cover of ‘Let it Go’ from the movie Frozen.

In 2016, BETRAYING THE MARTYRS joined forces with esteemed producer Justin Hill to create third album The Resilient, a record that cemented the band as the European kings of 21stcentury metal. The Resilient showcased their newfound focus on songwriting, which earned them many more huge touring opportunities – including a slot on the Summer Slaughter Tour (US), and further propelled them to become one of today’s most important heavy acts.

2019 will see the band embark on a global headline tour and raise the bar even further with their highly anticipated fourth album Rapture. 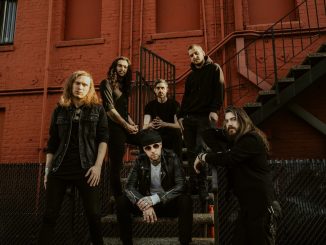