As many of you readers have read in my past articles, Rabit and I are always on the prowl for fresh new groups that are looking to carry the heavy metal torch their forefathers (Black Sabbath, Led Zeppelin, Judas Priest, etc.) have lit for them. In Pomona, we were informed about this concert event put together by Young Blood Productions, where the CEO, Nathan Young was celebrating his birthday. What better way to kick off your birthday than with some blistering riffs, hypnotic voices, and ear-shattering screams. He brought together a bunch of local groups looking to party, which included dream metal visionaries Blue Midnight and Young’s madhouse group Fate DeStroyed. Both bands are represented by the lovely Raquel Figlo, and we accepted her invitation to come rock out at the Character’s Sports Bar.

We arrived at the bar and awaited for Blue Midnight to take us to their version of dream land, where sonic rhythms and righteous licks filled our heads. Frontwoman Justine Glaser is truly a remarkable singer. Full of mystic beauty and melodic swagger, Glaser takes us on a journey through wondrous majesty. We first caught Blue Midnight when they opened for Lita Ford at the Whisky a month ago, and I felt that this performance was way more superior because you could hear everything this time. What makes Blue Midnight unique is the fact that they have an electric violinist, Edgar Sandoval, who gives the music a classical edge that gels into their metal sound very attractively. He trades off solos between him and lead shredder Michael Rodd, who was filled in nicely for Matt Hornbeck while he was touring. They blew Pomona away with their musing tunes like “Acid Rain,” “Needle,” the Evanescence cover “Sober,” “My Only,” and their breakout hit, “Nightshade.” Glaser is hitting her stride with each new gig, and Blue Midnight continues to make their dream metal a reality.

After the nu metal outfit Vüre finished their performance (they were okay), Fate DeStroyed came out to destroy my expectations of them. Fronted by the vicious and gorgeous Franccesca De Struct, Fate DeStroyed ravaged the ears of their fans with their mixture of metalcore, melodic death metal, and alternative metal. Franccesca has 2 sides of her; the soft, melodic songstress, and the terrorizing screaming queen that would give Carla Harvey and Heidi Shepherd a run for their money. If Trivium’s Matt Heafy and Arch Enemy’s Alissa White-Gluz had a baby, out would come Franccesca, ready to cause destruction. Lead guitarist Jonni Law was masterful, cranking out lead solos that had a sort of classic 80s vibe, like K.K. Downing meets Eddie Van Halen. The birthday boy, Nathan Young, stomped the courtyard with his bass beats, while rhythm guitarist Roger Bohlen and drummer Ben Levi stampeded the melodies with their instruments of mass destruction. From “We Fall” to “Inside,” “Art of Betrayal,” “The Storm,” “Shattered,” and their first single, “Break Free,” fate was kind to Fate DeStroyed. After “Break Free,” Franccesca went to the back of the drum kit (away from the canopy), lit a torch, and breathed fire into the sky. It took a few tries to light the damn torch, but once it was ready, the night sky became a great ball of fire.

This was certainly a great way to celebrate one’s birthday. Young painted black lines on his face to give himself a demonic look, and Fate DeStroyed gave an incredible performance. Blue Midnight had a better night, and they will continue to get better all the way to the Aftershock Festival in Sacramento this October. So, if you are looking for some new exciting, adrenaline-charged groups, be sure to check these guys out. Well done to Young Blood Productions for putting together an excellent evening for rock. To Fate DeStroyed and Blue Midnight, I salute you. Horns up!!! 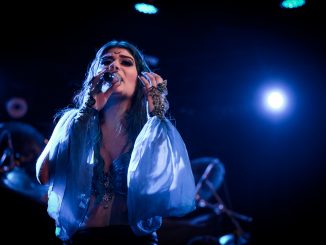