Though the Festival Stage bands (Festival Stage Review HERE) performed to the best of their ability. Majority of the patrons of the first Rockstar Disrupt Festival didn’t start arriving until about an hour before the Main Stage bands were to come on.  This benefited Sleeping with Sirens who was the last band to close out the festival stage line up, but the fans did make it clear that they were mostly here for the main stage performers.

The first band to start the lineup of main stage performers was another hometown band, Atreyu. This was my third time seeing them, and each time Atreyu seems to step it up a notch, and every time lead singer Alex Varkatzas seems to have different color hair. Trading off vocal duty with drummer and co-lead singer Brandon Saller, Atreyu songs have a great dichotomy to them and levels in the vocals. Guitarists Dan Jacobs and Travis Miguel play off each other with ease. Miguel even stopped strumming for one of his solos and only fretted while Jacobs came up next to him to strum the solo on Miguel’s guitar. Atreyu played some of their best song including “The Time is Now,” “Becoming the Bull,” “Falling Down,” and during “Ex’s and Oh’s” bassist Marc McKnight ran off stage and through the entire Amphitheatre. Ultimately ending in the mosh pit where he signaled for the moshers to circle pit around him, which every fan gladly complied. Before their last song, Varkatzas asked everyone in the crowd to raise their middle fingers high in the sky, Atreyu ended their set with “Blow” while every person in the crowd was jumping and flipping off the band.

The second main stage band to play is Circa Survive, who this was the first time I was seeing them. From listening to the band’s music on Spotify before the show, I was expecting a lot more of a calm and reserve performance, and not much stage antics from the band. During their first song “Act Appalled” lead singer Anthony Green shattered that perception instantly. Before he even came in with the first line of vocals he was standing at the foot of the stage prompting the crowd to crowd surf and get closer to him. When the audience wasn’t taking him up on the offer, Green jumped onto the barricade and decided to sing the first song completely in the arms of the fans. Walking across the barricade every few lines, Green was determined to get the crowd riled up for Circa’s set. After the first song completed, Green jumped back on stage to give a frenetic performance running around and jumping everywhere. Compared to Green, you could consider the rest of the band much more reserved as they mainly jammed in the back letting Green go wild. Playing songs like “The Difference Between Medicine and Poison Is in the Dose,” “In the Morning and Amazing…,” and closing their set with “Get Out,” Circa Survive made their presence known and willed the crowd into a frenzy.

Full Circa Survive gallery below:

Coming up to the stage next is a band I have eagerly been waiting to see live. In my mind one of the biggest names in early 2000’s pop punk scene. The one and only Sum 41. Right out of the gate, Sum 41 wanted to make their show the most memorable for two fans. Lead singer and rhythm guitarist Deryck Whibley grabbed a guy and a girl from the front of the crowd and invited them on stage where they got to watch all of Sum’s set from backstage. Opening their set with “The Hell Song” the crowd was ready to go crazy, as they moved into “Motivation” dry ice canon’s shot off and the crowd finally broke into a frenzy starting three separate mosh pits across the lawn of the FivePoint’s. Playing mostly songs off of their first two albums All Killer No Filler and Does This Look Infected?. Sum 41 was bringing every adult fan back to their high school days filled with teen angst and rebellion. When the opening notes were played by guitarist Dave Baksh to the bands icon “Fat Lip,” the crowd erupted and almost drowned up drummer Frank Zummo’s opening rap to the song by singing over him. Ending their set with “Still Waiting” the wait I did before seeing Sum 41 was worth it. They lived up to expectation and sound just like they do on their albums. I hope to catch them again the next time they perform a headlining tour, so I can enjoy an even longer set.

As a white curtain was draped over the front of the stage, imagery of The Used’s album In Love and Death was projected onto the curtain. As the ambient noise accompanying the imagery played and swelled up before you heard the cocking and firing of a gun followed by a large bang! The curtain drops and The Used fly towards the front of the stage kicking off their set with “Take It Away.” Lead Singer Bert McCracken is looking tone and fit running around the stage never missing a word. Though Bert still handles the majority of singing and all the clean vocals, bassist Jeph Howard has picked up the screaming duties on songs like “The Bird and the Worm” and “Buried Myself Alive.” As they went into “I Caught Fire” Bert brought out two kids to help sing the chorus, Colton and Drummer Dan Whiteside’s daughter, who ended up staying out for the rest of the set helping sing and dance throughout the set. Guitarist Joey Bradford, who joined the band in 2018, fits in perfectly with the aesthetic and rhythm of The Used. Before the songs “Blood on My Hands” and “Pretty Handsome Awkward” Bert decided to wax poetic by reciting some of his favorite Shakespeare poem that related to the topic of both songs. Though their set was running a bit long, The Used could not walk off stage without finishing their night with “A Box Full of Sharp Objects” with accompaniment by Sleeping with Sirens singer Kellin Quinn coming out to handle the screams. The crowd’s energy could not be contained for the entirety of The Used’s set.

Full The Used gallery below:

The final band to take the stage and headline this night was Irvine’s own Thrice. I have not listened to much of Thrice’s music, but I was curious to see how they planned on matching the intensity of The Used’s set.  Fogging up the whole stage and opening their set with “Yellow Belly,” Thrice decided to take the crowds energy in a whole different direction. Playing with more of a progressive and melodic rock style, the chaotic energy that was built up was mellowed down to a nice head bob and swaying in the audience. Thrice played through a large collection of their discography including songs like “The Artist and the Ambulance,” “Under A Killing Moon,” “Just Breathe,” “Of Dust and Nations,” “In Exile,” “Deeper Wells,” and “Black honey.” Throughout Thrice’s set it was a solid performance but it never felt like they brought the same high energy as the rest of the bands this day. Ending their set with “The Earth with Shake,” Thrice came across as a nice cool down after a hard workout from people moshing and jumping to the rest of the bands.

And then the Rockstar Disrupt Festival Irvine stop had come to an end. It was a long day of amazing music, dedicated fans, and musical therapy. With the main stage bands, the lineup would change every show to allow each band to close a different night. This gave the show a bit of an interesting setup as I had many different discussions with fans at the event on who the better closing act could have been. None the less Thrice closed out the night to a packed amphitheater and left the fans happy. There are only a couple tour date lefts as of the time of writing this, and if you can manage to catch one of them you are in for a phenomenal day of music. I do hope that Rockstar does continue their Disrupt Festival next summer, as I look forward to going to this summer touring festival again. 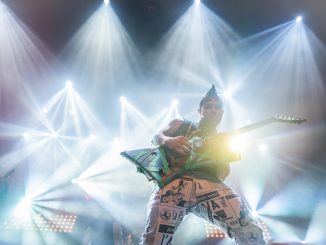 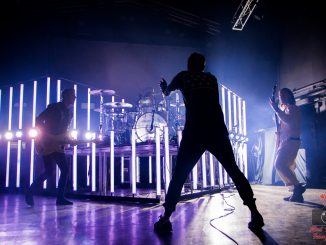 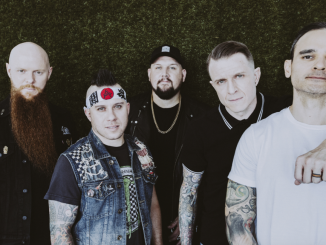