I thought it was going to be the end of Slipknot when original bassist Paul Gray (#2, aka the Pig) left this Earth in 2010. The masked fiend metalheads, who helped bring nu metal and extreme metal together, were in unknown territory and did not know what to do. Fortunately, they decided to carry on in the Pig’s name legacy. It has almost been a decade since his passing, and Slipknot is still going, stronger than ever. Last year, they gave a taste of new music that would be coming our way, with the newest heavy metal anthem “All Out Life.” I especially like the chanting bridge part, “We are not your kind!” A bold statement to everyone that is not a metalhead. That chant would become the title of their newest album, We Are Not Your Kind. Produced once again by Greg Fidelman (who also produced 2014’s .5: The Gray Chapter), Slipknot are looking to spear our ears with some Earth-shattering metal music. This album also marks the first without longtime co-percussionist Chris Fehn. I have been told it is their boldest album to date, so let’s find out.

Like an arcade game, “Insert Coin” drops the quarter into the heavy metal slot machine, and we hear a demonic instrumental chime one would hear at a haunted carnival. Once the chime comes to a close, we enter the album’s first single, “Unsainted.” A choir fills the background while frontman Corey Taylor sings the chorus. Then, he brings the terror with his screams. Jim Root and Mick Thompson go postal the same time on guitar. Both are one of the most effective duos in extreme/nu metal. The song is executed perfectly between the extreme and melodic nature that Taylor loves to throw in there. Next up is “Birth of the Cruel,” which sees Slipknot experiment with the industrial side of rock. Sid Wilson is a mad scientist on the turntables, screeching the discs to horrific pleasure. Taylor jumps back and forth between snarling and singing about the falsehood of ideologies and religions. He goes deep inside his tortured soul. After the instrumental chant from “Death Because of Death,” we see a marriage between groove and extreme metal with “Nero Forte.” Jay Weinberg dominates the drum kit with his swift speed. Shawn “Clown” Crahan, who is the percussionist and leader of the group, nails the march on his custom drum. A brutal testament that brings out all the hateful negative in a therapeutic way. Arguably one of the best tracks.

“Critical Darling” accelerates into alternative metal territory where the combination of Wilson’s turntables and Craig “133” Jones’ sampling and keyboards collide to epic proportion. In the middle, the guitar screeching mixed with the piano melody give the song a sort of eerie pop feel. Then, out of nowhere, Taylor blasts our eardrums to dust. A moody atmosphere fills the air in the beginning of “A Liar’s Funeral,” then enters an acoustic guitar. Taylor is somber over the guitar, until he screams “Liar!” On the third verse, he starts in with the death growl over the acoustic sound, then the rest of Slipknot comes in. It is as if Slipknot and Stone Sour merged as one on this grimly beautiful song. In “Red Flag,” we hear the group going back to their familiar roots of extreme nu metal. What was really impressive about this song was the intense shredding both Root and Thompson was firing out of their axes. Weinberg’s use of the double bass is boiling hot, with nothing to stop his hot streak. Clown amazes me at his precise banging on his custom percussion set. After the short musical interlude of “What’s Next,” we are treated to the horror inspired sound of “Spiders.” I see this song as Slipknot’s most experimental one yet. It dances around with alternative and industrial metal with the ambient music. Taylor takes a different approach to singing, never once screaming and conducting the song like a twisted nursery rhyme. The drum work is so creepy, it is beautiful.

We move along to “Orphan,” where speed metal is back in full force. I can hear the raw anguish in Taylor’s voice, pouring out his filthy soul to the listener. The booming sound coming from bassist Alessandro Venturella makes me want to close my fist and hit a punching bag with full force. This tune is full of pure adrenaline. “My Pain” says it all: let pain be your friend and lover, for she will never leave you. Wilson adds a little electronic flavor to this industrial inspired song. I kind of see this as a love song to wretched pain. Slipknot continues to evolve as the music goes on this record. Strange, yet strangely satisfying. “Not Long For This World” takes alternative metal to a new plateau as Taylor gets emotional and personal. This song is well-written enough to be played on mainstream radio stations. The guitar solo is very edgy and trippy, as if it was meant for psychedelia. This tune makes a huge impact on We Are Not Your Kind. We have come to finish line, and what better way for Slipknot to go for the kill than with “Solway Firth.” It starts off with unnerving electronic samples before driving the spike in our heads with extreme and thrash metal. With lyrics soaked in blood and gruesome torture, Slipknot cranks it up to volumes unheard of before. The penetrating guitar work and brutal drumming kicks us in the balls, and we like it. This song definitely challenges us to all fucking life.

We have been patiently waiting 5 years for a new Slipknot record, and it was well worth the wait. Not only do they slice and dice our ear canals, but they do it with different styles. Throwing in industrial, alternative, groove, electronic, and thrash to go along with their extreme signature sound was genius. They pushed the boundaries on what makes a vicious heavy metal record sound so attractive. We Are Not Your Kind is their finest work since Vol. 3: (The Subliminal Verses). This is probably the best metal record of the decade. To Slipknot, I salute you. Horns fucking up!!! 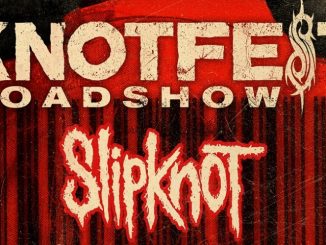