Progressive? Check! Innovative? Check! Reclusive? Check! Eclectic? Check! Insightful? Check! All of these characteristics are some of the best ways to describe a TOOL record. For the past 13 years, fans of the alternative/progressive metal outfit from Los Angeles have been waiting patiently for their next album to surface. After 2006’s 10,000 Days, it has certainly felt that long since we heard a new song from them. TOOL is arguably one of the weirdest metal groups to ever exist. They are so out there with their sound, it is pure genius. Recently, they have released all their records on streaming/downloadable sites for the first time, which is precisely the same time I became a fan. It was just so damn hard to find their music. If that was not great enough, they have finally produced their long-waited 5th album, Fear Inoculum. This record is clocked at almost 90 minutes. Was it worth the long wait? Let’s find out!

We start with the self-titled track, “Fear Inoculum,” which also served as their 1st single in 13 years. In the beginning, high-pitched chimes echo over a dark viola orchestra ambiance. This is a signal by TOOL that we entered a new world. After about 90 seconds of electronic wonder, Justin Chancellor comes in with a funky bass riff, along with Maynard James Keenan’s melancholy singing. His voice is so haunting and gripping at the same time in this song. Come off his successfully A Perfect Circle reunion, Keenan pens some intense lyrics that specialize in fear and control. Towards the end, guitarist Adam Jones wails a psychedelic/alternative solo that digests into my ears very smoothly. A promising beginning track. Next up is that ultra-weird “Pneuma.” Jones and Chancellor go into the infectious melody that reminds me a lot of the stuff I heard in their debut album, Undertow. Keenan dives into the unknown, describing us a spirit reaching beyond the flesh of our own bodies. What really impresses me was the insane drumming by Danny Carey. Every time the main chorus riff comes up, Carey goes full-blown Neil Peart and Keith Moon. “Pneuma” makes my spirit soar high to Heaven. “Litanie contre la Peur” is the 1st of 4 instrumentals, where wavy sound effects makes you think you entered the Twilight Zone. Or more appropriately, the TOOL Zone.

The 4th song on the LP is none other than “Invincible.” Jones lays it in softly in the beginning with a simple melody, while Carey makes a strange beat. After 2 minutes, Chancellor comes knocking down the softness with an aggressive bass beat. Lyrically, TOOL tells the story of an aging warrior looking to still be the best, though he knows he is nowhere near his peak. Keenan does a masterful job with this song vocally. At the halfway point of the song, Jones goes into this hollowing, wailing, distorting solo that gives “Invincible” magic on the progressive side. Then, at 2 minutes left, the song goes into a heavy alternative direction that differs from the rest of the sound. This is pure genius, throwing us a curve ball like that. Next came the 2nd instrumental, “Legion Inoculant.” More progressive sound waves hit our ears, as if it is a signal from Keenan’s home planet. The waves are provided beautifully by Welsh industrial musician/composer Lustmord. We exit “Legion Inoculant,” and enter “Descending” next. With the sound of waves crashing, we fall deeper into TOOL’s musical psyche. This 13+ minute track is probably the trippiest song produced for this album. TOOL conquer the realms of psychedelia and progressive metal at the same time. Jones’ solo has a slick grunge feel that sounds like it was played by Soundgarden’s Kim Thayil. I continue down the rabbit hole, with no end in sight. “Culling Voices” has a mental punch that can put one into a tailspin. The way that I can interpret it, the song deals with mental illness, anger and loneliness. Those are pretty big stuff for Keenan to tackle, but he words very cryptically that you have to truly listen. I love how the music starts off in an acoustic-like rhythm, and it constantly builds and builds until Jones smacks you in the face with his heavy riffs. This is a great tune if not an important one. We come to the 3rd instrumental, “Chocolate Chip Trip,” and oh boy was this song a trip. Not only is Carey a versatile drummer, but he transports you to another world with his synthesizer. He starts with an electronic feel, then goes into this badass drum solo that has a jazz touch to it, as if he is possessed by the ghost of Buddy Rich. Just like the name entails, this instrumental number is a sweet-tasting trip. We now come to the grand puma of Fear Inoculum, “7emptest.” Right out of the gate, this song screams bloody murder, making it the heaviest song off the album. Keenan goes postal on the vocals, screaming viciously but melodically. I really dug how Jones and Chancellor are almost in sync together, while Carey tears the skin off the drum kit with his cunning quickness and slashing. Clocking at 15+ minutes, this is the probably the best song they have written since “Schism.” The album ends with “Mockingbeat,” the last instrumental track. Lustmord and TOOL give screeching bird chirps and a soft conga drum beat, which I see as us exiting the wild jungle we entered.

After 13 years of waiting, this is the album that was well-worth the wait. TOOL has not lost their edge, still as sharp as ever, if not wiser. They have created a progressive journey with their signature time signatures that does not play by the rules. In an interview I read, Carey mentioned that he wanted to release Fear Inoculum as one long, giant single. If that happened, I would have to shut the world out for an hour and a half to pay attention. Thank God they went the route they did. Watch out Taylor Swift and Justin “Ass-clown” Bieber, TOOL is back and better than ever. To TOOL, I salute you. Horns up!!! 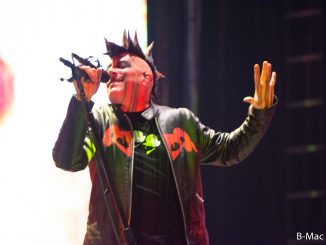 The Staples Center Becomes A Progressive Metal Mecca with TOOL