LISTEN TO THE FULL ALBUM HERE

“Welcome Home is a proud tribute to a metal legend.” — Metal Hammer

Today, hard rock purveyors HELLYEAH release their sixth studio album, Welcome Home, via Eleven Seven Music, available HERE. It’s been almost 12 years since the release of their first album, HELLYEAH, and just over one year since the passing of bandmate and brother Vinnie Paul. The band paid tribute to their fallen brother and bandmate, by releasing “Skyy and Water” a reverential video filmed by Wombat Fire highlighting some incredible moments from the past.
You can watch the video HERE.

“I think Vince would be proud of what we’ve done. Chad really nailed it vocally and lyrically. We went out of the box a bit on this album. Left the studio a few times a little uncertain, but we tried new stuff, and we’re eager to see what people think of it.” – guitarist Tom Maxwell

Welcome Home, which features the late Vinnie Paul’s final recordings, will unleash 11 tracks, driven
by their love, loyalty, reverence and respect for their fallen brother, including album opener and raging track “333,” one of two tracks Vinnie heard before his passing, guitar-driven “Perfect,” gritty “Oh My God,” and Top 5 Active Rock single “Welcome Home,” which is the band’s fastest-growing song at Active Rock Radio. As a toast from the rock-gods and as a loving letter to Vince, HELLYEAH offers up their heartfelt, stripped-down track, “Skyy and Water.” ‘Choking back my tears again today, I can hear your voice / I can hear you say, ‘Don’t sweat the small stuff and just keep on keeping on.’

The band will continue to honor their late bandmate by donating a portion of ticket sales from each tour date to the American Heart Association in Vinnie Paul’s memory. Tickets and full routing are available HERE.

In addition to this initiative, HELLYEAH will host a TEXT TO DONATE campaign during each of their upcoming tour dates. Fans can TEXT ‘VINNIE’ to #41411, or head to a special CrowdRise page where they can also DONATE to help fight heart disease, as well as read more about the American Heart Association and HELLYEAH’s interview with them HERE. 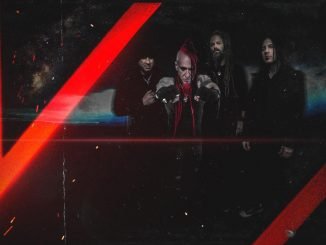