Sadartha’s third release is the ep Growth. With slightly better production than the last two albums, the band drops most of the hardcore punk influences going for a pure grunge sound.

Opening track Emptifull has a sweet groove in the verse and explodes on the chorus. The band seems to have found their footing hear. Jangly muddy guitars, pulsating bass, and frantic but precise drums. Is it 1992 again?

Aconitum starts with a watery sounding guitar riff. So slow and vibey. This is like Nirvana’s Nevermind meets Alice In Chain’s Jar Of Flies. So dark, so sublime.

Eclipsing Binaries sounds upbeat. A lazy day with a joint in the sun with nothing to do is what comes to mind. Really good song. Nice melodies. These dudes are definitely on the rise and just get better.

Sacred Scorcher has such an awesome groove. Hearing a little Mudhoney influence here. Then the guitars distort and it’s a train barreling down the tracks at 110 mph on fire. It’s fucking great.

Just Skin starts off with another watery guitar riff.

Johnny is almost whispering the vocals. It’s so eerie and moving, before the chorus explodes, literally like a nuclear bomb.

The final track Senseless Pointless has a great riff and hook. And some great discord. Such an intense song. Odd chords here n there.

All in all it is 6 great grunge rock songs by an incredibly overlooked band. If you like Early Nirvana and Mudhoney, you need to check these guys out. This EP is their best yet. It comes out October 19th. Don’t fucking miss it! 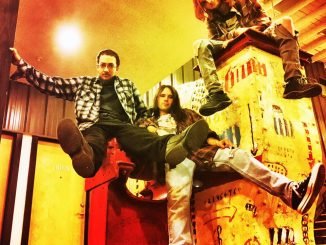